Skip to content
You are here
Home > Environment > Kangaroo Archive > Updated: A JOKE IF IT WEREN’T TRAGIC

The ACT government’s nature reserve director and advising ecologist have again demonstrated their low regard for the intelligence of the ACT public when it comes to their lethal kangaroo management approach.

This may appear justified in an arena of misinformation and scientifically debatable ‘facts’ accepted by the ACT mainstream media and offered to members of the public via the Territory and Municipal Services (TAMS) website.  ACT residents have been persuaded to accept miraculously rebounding kangaroo populations, debatable auto crash data and alleged impact on endangered species not replicated elsewhere.

Now that the ACT Administrative Appeals Tribunal has (again) sided with the local bureaucrats against outside scientific criticism of the program, some 1200 kangaroos are being shot in urban nature reserves for 2013.

The mechanical goal is a density of about half a kangaroo per hectare, which in normal grassland terms in very low. It takes no account of family structures or viability of survivors. In the case of weed-infested Mt Painter reserve it is likely that no kangaroos will be left for visitors to enjoy if the set quota is achieved, given a disputed total count.

Once again the formal reason given has been about protecting endangered species and grasslands from “too many” native herbivores. So what do we see at the Mullangarri grasslands surrounded by new suburbs in outer Gungahlin? We find a series of new paddocks across one side of the grassland marked out by shiny five-strand barbed wire.

Quite apart from the ugliness and animal unfriendliness of criss-crossing a nature reserve with barbed wire, here’s the main irony that perhaps TAMS thinks the ACT public is too on-side to notice.

While 25 Mullangarri kangaroos (native grass-eaters) face a bullet in this latest cull, TAMS has acknowledged it plans to put stock ­– almost certainly cattle — behind the fences for “fuel hazard reduction” in late spring and early summer.

Reserve managers have previously said they prefer stock to kangaroos to reduce the grass in the scarce native grasslands for fire management, because well, stock are more manageable! They haven’t said whether they have studied the impact of cattle on endangered species or whether there are even any of these species demonstrably present.

“On Saturday 20 July a herd of cows were seen grazing within the grassy box woodlands at Mt Painter Nature Reserve, along William Hovel Drive.

This is the same reserve and area where 80 kangaroos plus their dependent young are being killed to supposedly protect the same grassy box woodlands from overgrazing.  This is hypocrisy.

“Cows have not been seen in this area before the announcement of the cull in June 2013. But now the cull is underway cows have miraculously appeared where the kangaroos live.

“A dozen shots were heard as the kangaroos where being shot. There were no cows in this reserve at that time. Following the shooting of the kangaroos at Crace, cows were seen to be grazing in this reserve. There is still clear evidence of vehicle tracks and cow pats in this Reserve today.” 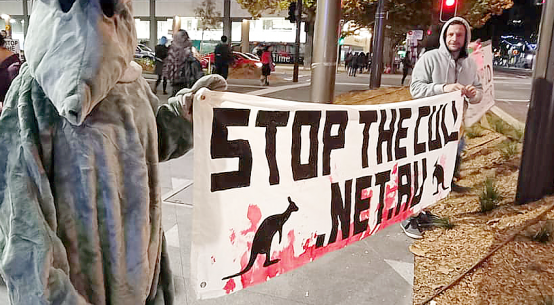 2 thoughts on “Updated: A JOKE IF IT WEREN’T TRAGIC”