Skip to content
You are here
Home > Environment > Book Review > A superb exploration and a tragic tale: what is happening as humans change the planet 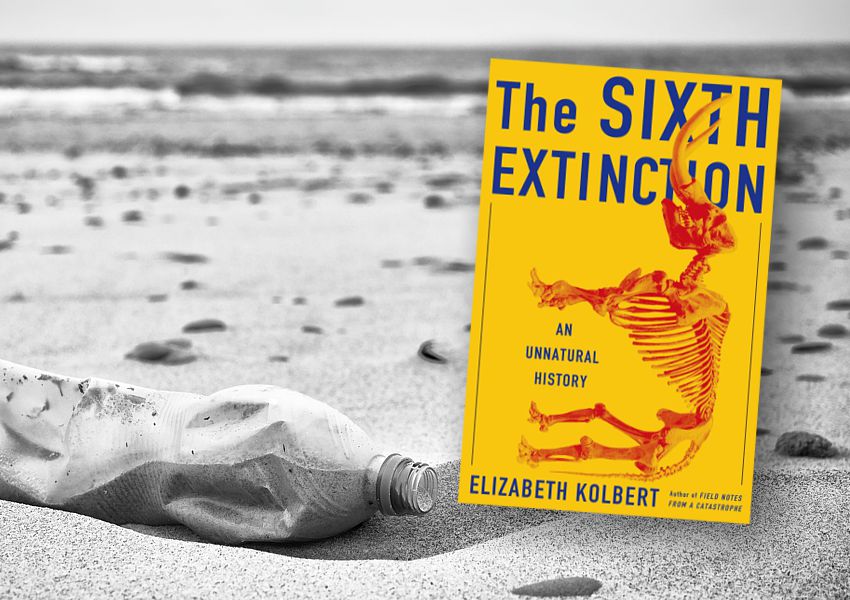 The Sixth Extinction, An Unnatural History

The Sixth Extinction is a remarkable achievement, a finely written and enthralling read.  Elizabeth Kolbert traces a single, current extinction event in the context of the history of life on Earth.

Her  research was exhaustive, involving the examination of three centuries of scientific literature, consultation with many scientists, including at their field sites in Panama, Iceland, Scotland, the Peruvian jungle, The Great Barrier Reef, Italy and the United States where she observes and assists scientists documenting endangered amphibians, butterflies, tree lines, earth samples, coral reefs and their marine life.

Kolbert’s focus is the most recent of the six worst catastrophic extinction events in history. Most of life on Earth was wiped out in each of the first five. The scale of loss for the sixth is still unknown for it is in progress now; however, the present rate of extinction is now possibly up to 140,000 species per year.

Scientists estimate that one third of reef corals, freshwater molluscs, sharks and rays, a fifth of all reptiles, a quarter of all mammals and a sixth of all birds will become extinct this century.

The scientific name of the current extinction is ‘the Holocene’, derived from Greek for ‘entirely recent’. Scientists have also coined an alternative term for it, ‘the Anthropocene’, recognising that its primary cause is human activity.

Kolbert beautifully recounts the emergence of humans “in a sliver of east Africa, a species that does not yet have a name… but has the capacity to name things”. This is the capacity that enabled us to communicate, cooperate and rearrange the world to its present state. The hope in the statement is that we can also make change for the benefit of other species not only our own.

Kolbert points out that until the late eighteenth century, there was no awareness of extinction as a possibility. Fossil bones had been found but were assumed to belong to individuals whose species had moved somewhere else. Then, in 1796 the French naturalist and zoologist, Georges Cuvier, provided evidence that the bones of a large animal unearthed in the United States in 1739 belonged to a species that no longer existed anywhere. He named the creature a ‘mastodon’ in reference to its massive molars.

Tragedy of the Great Auk 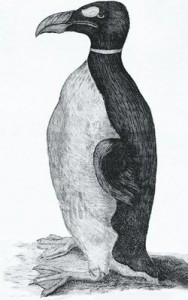 The book homes in on species specific extinctions, such as that of the Great Auk. The ancestor of the penguin, the Auk once numbered in millions across the North Atlantic from Spain to Canada, Greenland, Iceland, the Faroe Islands, Norway, Ireland, and Great Britain. The flightless bird was easy prey for hunters and sailors who killed it for its meat and downy feathers on such a scale that in 1844 the Auk became extinct. (Seen here is the only known illustration of a Great Auk drawn from life by Olaus Wormius 1588–1655. Public Domain.)

Kolbert reminds us that many other species are currently teetering on the brink of extinction. We read of ‘Suci’, a Sumatran rhinoceros, one of only a hundred individuals left as a result of poaching and habitat destruction.

A zoologist at the Cincinnati Zoo was delighted when an ultrasound detects a healthy egg in one of Suci’s fallopian tubes. The bitter truth then unfolds that females of this species ovulate only when they sense the presence of a male nearby. The nearest male Sumatran rhinoceros was 16,000 kilometres away.  Suci died without offspring.

Death of a pollinator

In another instance of humans’ role in species extinction, Kolbert participates in a population census of the North American Brown Bat in a cave in New York State. Biologists found hundreds of bats dead or dying, the cause being a fungus unknowingly carried in by visitors’ clothing and contaminated caving equipment. At least six million bats have died of the fungus since 2006.  Like bees and birds, bats are pollinators fertilising plants on which humans and other species are dependent.

Kolbert makes a compelling case for us, the cleverest species on Earth, to commit to major change to at least stem the scale of extinctions now well underway. In her characteristically vivid, direct, almost conversational style she ends with a crystal clear enunciation of the problem, it’s cause and how to begin to address it:

“When the world changes faster than species can adapt, many fall out. This is the case whether the agent drops from the sky in a fiery streak or drives to work in a Honda. To argue that the current extinction event could be averted if people just cared more and were willing to make sacrifices is not wrong, exactly; still it misses the point. It doesn’t much matter whether people care or don’t care. What matters is that people change the world.”