Skip to content
You are here
Home > Editorial / Opinion > Around the Web > A tale of two Hunts: Greg, Jen and an awkward family Christmas 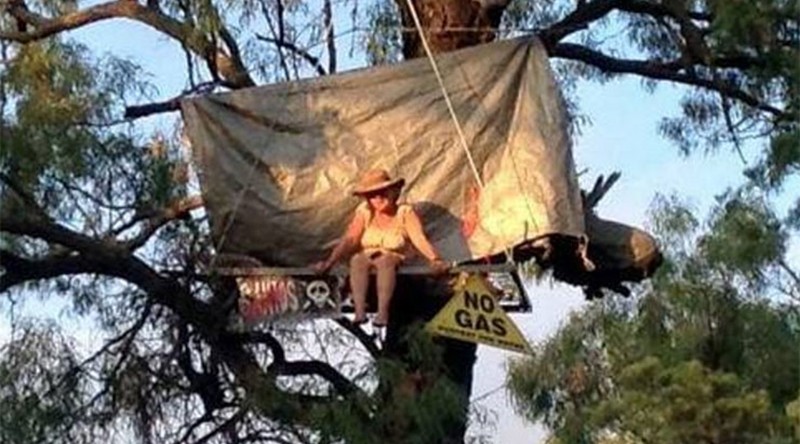 Federal Environment Minister Greg Hunt is a powerful man, but apparently, even he can’t choose family.

With his first cousin Clarity Greenwood – or, more formally, Jen Hunt – said to be hugging a tree in the Pilliga State Forest to protest against a coal seam gas project that Minister Hunt will have to approve – the festive season may have been a little awkward this year.

According to activists blockading Santos’ Narrabri (coal seam) Gas Project in the Pilliga State Forest, in north-west New South Wales, Greg Hunt’s cousin has been amongst their number for a month or so now.

Activists are fighting against Santos’ plan to develop a massive coal seam gas field – the largest in NSW – which protestors argue would compromise the Great Artesian Basin and further endanger threatened wildlife.

If the project is to proceed, Hunt will have to disagree, and give it the green light under national environmental law. If he does, there’s no doubt Cousin Jen will be questioning the clarity of his judgment.

“She’s blocking the access to Leewood [water treatment facility]. She’s blocked the road that leads to both access gates, so no vehicles are able to enter the site. She’s suspended 12 metres up a tree on a platform, and the ropes that are tensioned off holding her there are across the road so that vehicles can’t go through,” said a spokesperson for the blockade camp, Naomi Hodgson of the Newcastle branch of the Wilderness Society.

The story is eerily reminiscent of one of the government’s own, who appeared in a counter-terrorism pamphlet distributed to school children.

‘Karen the environmentalist’ was a fictitious conservationist who got involved in radical activism, and, presumably, vigilante law fare of all sorts. Bad Karen.

Let’s review: “Karen grew up in a loving family who never participated in activism of any sort. When she moved out of home to attend university Karen became involved in the alternative music scene, student politics and left-wing activism….”

In time, “Karen was arrested on numerous occasions for trespass, damaging property, assault and obstructing police. She said at the time she felt like she was ‘a soldier for the environment so breaking the law didn’t matter’. It became all consuming for Karen and she became totally cut off from her family and previous set of friends”.

Not so for Jen Hunt (who, it’s worth noting, is part of an entirely peaceful protest movement). But Jen still maintains some contact with her cousin Greg, it appears.

According to Hodgson, the retired 51-year-old social worker had been involved in earlier protest action which saw Santos staff continue to work around activists who’d chained themselves to machinery, in a move which they argue endangered their safety and contravened Workplace Health and Safety Laws.

According to Hodgson, Jen got straight on the blower to Greg, who returned her call to chat about the incident. While the two Hunts obviously take a very different approach to their environmentalism, in fairness the Minister couldn’t be accused of hypocrisy on that front. There’s a first for everything.

New Matilda was unable to reach Jen Hunt this morning, and Greg Hunt’s office has declined to comment on ‘family matters’.

But in a pre-prepared media release, Jen Hunt is quoted as saying “I’m up this tree today to call on my cousin to use his powers under Federal [environmental law]to reject Santos’ application for the Narrabri Gas Project in the Pilliga for its unacceptable risks to our precious groundwater resources”.

“We do not need this expensive gas which is destined for export, we certainly don’t need it at risk of destroying one of the most critical water resources we have in Australia.

“With love, I’m asking my cousin to start putting the people before the polluters,” Jen Hunt said.

“I salute Jen for bravely standing up to protect the Pilliga forest and climate from the threat of coal seam gas,” he told New Matilda.

“The fact that she is Environment Minister Greg Hunt’s cousin highlights just how spineless Hunt has been at protecting the environment. I wish Greg Hunt had a smidgen of the bravery and vision of his cousin Jen and all those committed to stopping coal seam gas.”