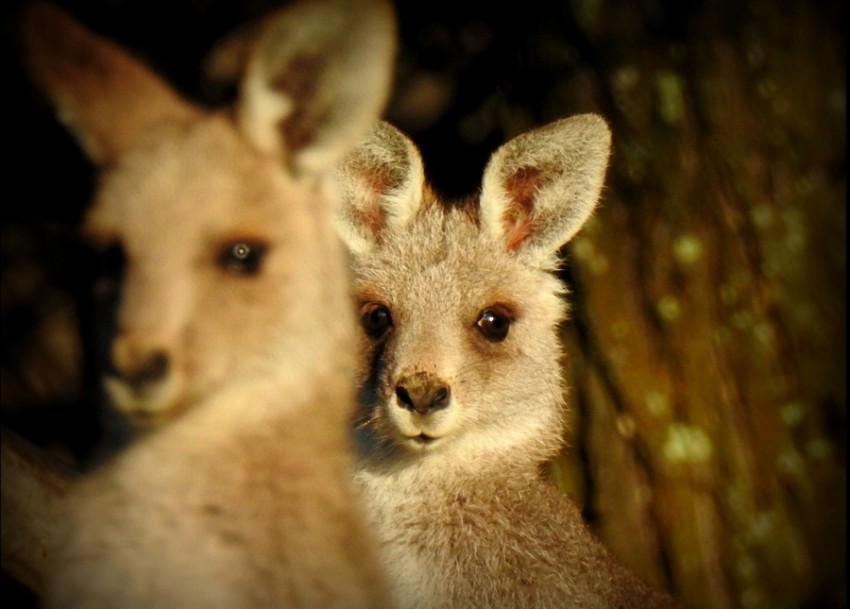 Since animal protection activists began their nightly vigils on and around the reserves where the ACT government conducts its annual kangaroo slaughter, they have observed dozens of dependent kangaroo joeys, unattended by any adult kangaroos, lining the nearby roadsides. Most of these joeys will never be claimed by their mothers because their mothers have been shot.

The fate of this multitude of unclaimed young animals is death in most cases due to myopathy, hypothermia, starvation or car-strike.

The Code of Practice requires that dependent young be killed rather than left to die. However, because dependent young are not permitted to be included in the shooters’ ‘kill counts’, there is no incentive for the shooters to pursue and kill fast-moving joeys, code or no code.

The Animal Protectors Alliance (APA) was compiling a complaint to the ACT government about the way government officials were failing to prevent or alleviate the suffering of these thousands (counted over seven years) of joeys, when a new and equally serious failure by the government’s kangaroo killers suddenly emerged: the dangerous and unlawful shooting of kangaroos on unleased public land.

In June 2015, members of the public protesting the kangaroo slaughter at Wanniassa Hills Nature Reserve (WHNR) noticed that kangaroo shooting was taking place on the adjacent horse paddocks (the Rose Cottage Horse Paddocks, RCHP), close to the Centenary Trail.

This is public land that remained open to the public night and day throughout the shooting season, while the WHNR (like other Reserves of the Canberra Nature Park) was closed for shooting. No public announcement was ever made that shooting would take place on the RCHP and no signs were erected. This shooting occurred while protestors, cyclists and dog walkers were within 100 metres of the shooters.

The shooting near the Centenary Trail was observed to occur on 23 and 24 June 2015.  FOI material obtained later revealed that on these dates no licence had been issued to permit shooting on this part of the RCHP. The day after the illegal shooting was reported to the police, an existing licence was extended to include this area.

On 24 June, believing the shooting outside the Canberra Nature Park to be illegal, one protestor, Chris Klootwijk called the police. The police arrived in the company of a government ranger who assured Chris (and had, presumably, already assured the police) that the shooting was legal.

[Dr Klootwijk was later arrested and found guilty by a magistrate for obstructing a government official by blowing a whistle.  His arrest was overturned on appeal in July 2016 when the Supreme Court found that the ACT failed to have a legal license for its shooting activities in both 2015 and 2016].

FOI documents show history of government buck passing and use of privacy protocols to mask public endangerment near shooting sites.

The APA has spent a year trying to get to the bottom of the shooting on the RCHP, and redress the suffering of the orphaned joeys. The dossier of their correspondence with government officials reveals a story of utter laziness by some government officials, buck passing by others, and use of privacy protocols to excuse public endangerment by others.

Without any form of censure for 2015 illegal behaviour, government kangaroo killers went from bad to worse in 2016. At Isaac’s Ridge Nature Reserve in both May and July, kangaroos were shot within 30 metres of Mugga Lane where protestors stood outside the fence watching them, and hundreds of cars drove past, most of them on their way home from work, never realising their danger.

A dossier assembled by APA shows a triple betrayal: betrayal of thousands of baby animals left to die of myopathy, hypothermia, starvation or car-strike; of numerous human bystanders whose lives were put at risk without their knowledge or consent; and threats to democracy itself as every government review process declined to even acknowledge, let alone try to right an obvious wrong revealed by the government’s own documentary evidence.

ACT failed to have valid license to shoot wildlife

Defendant Dr Chris Klootwijk’s response to his acquittal: “It’s great! I’ve been promoted from ‘crim’ to ‘pest’.” Klootwijk had been charged with interfering with a public official when he blew a whistle on public land next to the kangaroo shooters in 2015.

The appeal ruling that saw him acquitted – that the 2015 killing licence was invalid – did not stop ACT parks from killing nearly a thousand kangaroos under the same licence in 2016.

Get more information about this story.

BIG KILL A local wildlife advocate group, Regional Friends of Wildlife, have learned that in the past two years at least, and arguably for much longer, the ACT Conservator of Flora and Fauna has been handing out some 80 licenses to rural lessees and other undisclosed recipients (citing privacy legislation) as well as to reserve managers, to annually kill about 20,000 kangaroos (a ‘protected’ native species). This begs the question whether the ACT’s underlying agenda is kangaroo eradication – to please a certain viewpoint that the countryside belongs exclusively to domestic stock, and possibly to please the insurance industry?