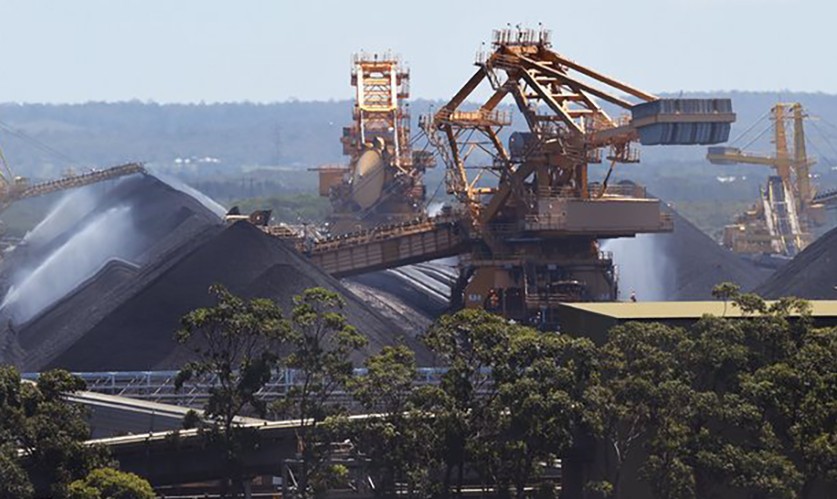 Amid dire warnings for the future of coal, the lenders signed off on $5.5bn worth of deals for the sector in 2015, according to analysis by activist group

The Commonwealth, Westpac, ANZ and National Australia Bank signed off on loans totalling $5.5bn to coal, oil, gas and liquefied natural gas projects in 2015, a figure that is higher than three of the preceding eight years.

Among the deals were eight loans for coal projects signed in Australia in 2015, with a total value of $4bn, including for struggling Whitehaven Coal, operator of the controversial Maules Creek mine. All of the projects had some financing from the big four banks, with their contributions totalling $995m.

The Commonwealth, Westpac, ANZ and National Australia Bank signed off on loans totalling $5.5bn to coal, oil, gas and liquefied natural gas projects in 2015, a figure that is higher than three of the preceding eight years.

Among the deals were eight loans for coal projects signed in Australia in 2015, with a total value of $4bn, including for struggling Whitehaven Coal, operator of the controversial Maules Creek mine. All of the projects had some financing from the big four banks, with their contributions totalling $995m. 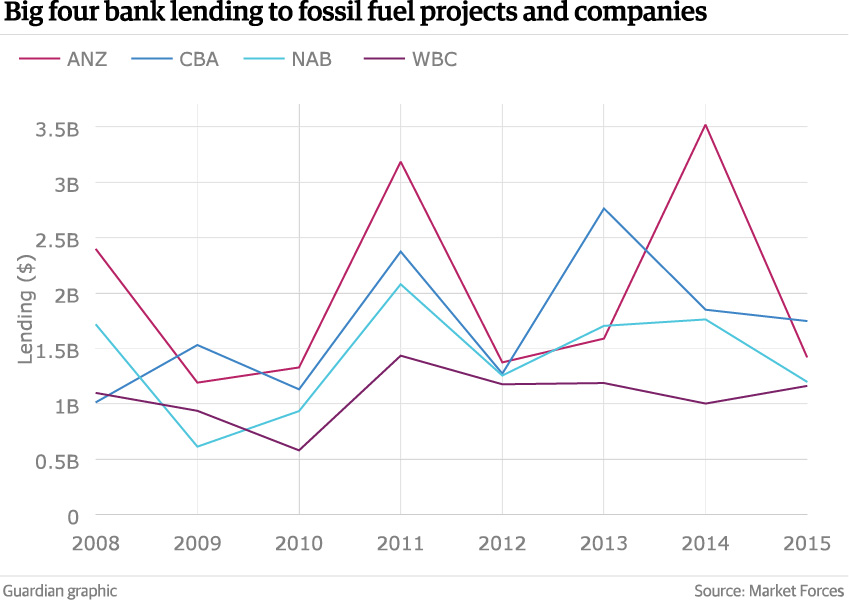 “It’s pretty much business as usual for the big four,” said Julien Vincent from Market Forces.

It comes amid a series of dire warnings for the future of coal, with consumption declining in major economies such as the US and China. Last week, Goldman Sachs forecast that coal may be in terminal decline, with the fall in demand possibly being irreversible. 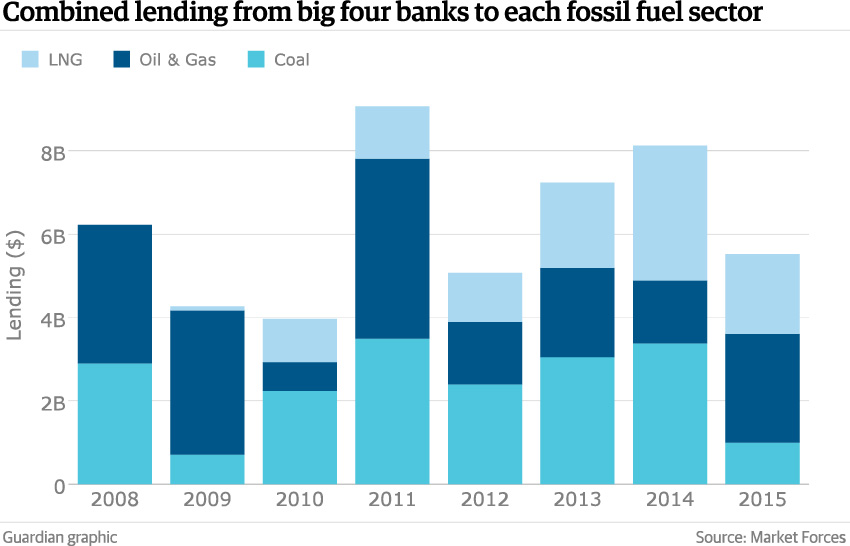 All big four banks have made statements supporting a 2C target and they have acknowledged the need to play a role in achieving a shift away from fossil fuels.

After the Paris climate accord of December 2015, Westpac went so far as saying it would take “concrete action to ensure our lending and investing activities support an economy that limits global warming to less than two degrees”.

ANZ’s statement acknowledged worries that lending to fossil fuels was in conflict with the need to reduce greenhouse gas emissions. It committed to not lend to any new coal-fired power plants that didn’t use high-quality coal.

The data was collected from public announcements made by the banks since 2008 and shared with Guardian Australia by Market Forces.

Vincent said it showed the banks’ actions were not consistent with statements about climate change because continuing to exploit fossil fuels would blow the carbon budget, increasing warming beyond 2C.

Among the $5.5bn of financing from the big four banks, there were 21 fossil fuel projects, including $300m for the struggling Whitehaven Coal, which had its loan refinanced by ANZ, Westpac and the Commonwealth Bank.

Under the new terms, Whitehaven Coal was given a lower interest rate, despite its share price plummeting to a quarter of what it was when its controversial Maules Creek mine was first approved in July 2013.

When the refinancing was announced last year, Whitehaven Coal’s chief executive, Paul Flynn, was quoted in Fairfax Media trumpeting the support from the banks as a mark of confidence in the coal industry.

“For those who think the coal industry is part of the past, they may need to rethink their views, because that is certainly not the view of those who have just funded the deal,” Flynn said.

“To have all the major banks represented in our syndicate and for them to sign up again, on even better terms than what we had before, obviously their belief in our business and our industry is very strong.”

Since that deal was announced less than a year ago, the company’s share price has fallen 65%. Tim Buckley, an analyst from the Institute for Energy Economics and Financial Analysis, told Guardian Australia the banks immediately started trading the debt in secondary markets and lost 20% on it in the first few months.

Buckley said the bad performance of that loan was an “a-ha moment” for the banking industry. He said he was sure that next year similar analysis would show a drop in fossil fuel lending but not because of environmental concerns – simply because they are realising fossil fuels are a bad bet.

“The financial markets have realised that [the Paris accord] was a massive aha-moment for everyone … They are saying, ‘Look, we know that policy action globally is inevitable,” Buckley said. As a result they were beginning to be more cautious about financing fossil fuels and that would be reflected at the end of this year, he said.

In response to the Market Forces figures, the big four banks all sent statements to Guardian Australia emphasising their lending to renewable energy projects.

Westpac and the Commonwealth Bank provided links to some publicly available data on their exposure to the fossil fuel industry but it was not possible to compare the figures over time or against other banks. ANZ has similar data available.

ANZ said that since 40% of the world’s energy comes from coal and it remains the cheapest fuel, a transition from coal needed to be “managed responsibly over time”.

NAB said that, to secure Australia’s energy needs, renewable energy will play an increasing role but “fossil fuel will continue to be a major energy source for the foreseeable future”.

The big four Australian banks were involved in 70% of the deals but were not alone in financing coal, gas and LNG projects. Their deals made up a quarter of the $22bn in loans to fossil fuel projects that were signed-off on in 2015 from both Australian and international banks.

Top 10 Lenders to fossil fuels in Austrlian in 2015

The figures do not give a complete picture of how much the banks are lending to fossil fuels overall – their “exposure” – because many of the deals that were signed were refinancing, so are not necessarily increasing the amount of money lent to fossil fuel companies. Refinancing is a process where one loan is replaced with another under new terms.

But Vincent said while banks were starting to become more transparent, they still did not provide enough information for shareholders and other stakeholders to calculate their overall exposure to fossil fuels over time and compare them.

Vincent said that refinancing can also extend the length of a loan, or improve its terms, so refinanced deals are not always simply a continuation of the status quo.

“And in light of statements supporting a move away from fossil fuels, banks could always choose not to refinance a loan,” he said. “The Whitehaven deal is a good example. Any of the big four could have turned around and said ‘all those activists climbing on your project and delaying it, and the decline in share price, it’s just too hot to handle and we’re going to exit this’.”

“The banks are desperate to stay in a position of business as usual. What this shows is an intent and a willingness to stay involved in the industry and to be exposed to it.”

Vincent pointed out some banks have done exactly that on Abbot Point, leaving continuing doubts about whether the project could receive the loans it needs to proceed. 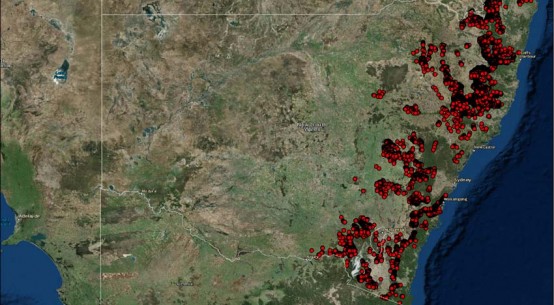 What clean fuel can replace coal in NSW with no down time?