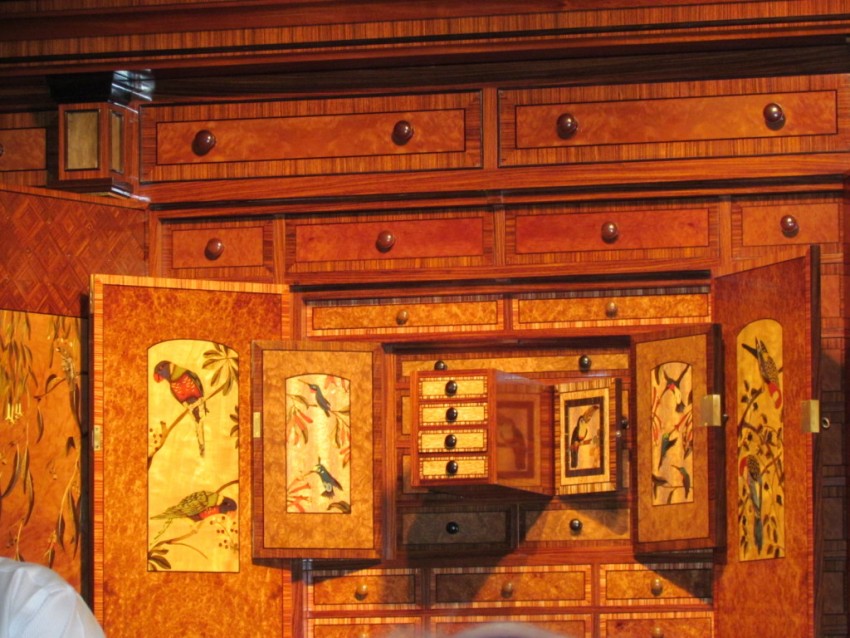 Geoffrey S. Hannah is pure Australian. It’s in his humour, his easy-going manner but also in his meticulous dedication to his craft.  This life-long northern NSW resident has devoted his mature years to producing a unique series of cabinets that leave the viewers of his work spellbound and incredulous at their detail and perfection.

Awarded a Churchill Fellowship to travel to Paris, Versailles and London, Geoff studied the furniture in those venerable places from the period 1635 – 1850 to help derive his unique approach to producing four cabinets over a 27-year period.

The cabinets describe facets of Australia and its natural treasures. The timbers come from dozens of Australian trees. Ebony came from New Guinea on the latest work, the Hannah Cabinet.

A typical bit of Geoff Hannah humour emerges as he describes his near heart-attack at the cost of a single piece of ebony: $10,000. That piece became the carefully-turned pillars on the Hannah Cabinet and, wasting nothing, thin strips lining cabinet sections.

Flora and fauna – birds, bees, butterflies, fish and flowers – emerge from his marquetry work. Precious and semi precious gems also feature progressively through the evolution of the cabinets.

The Churchill Fellowship demanded that he endeavour to pass on his newly acquired skills and design approaches to other Australians on his return. As a result, he has become a renowned teacher of his craft to many hundreds of aspiring woodworkers both young and old, whether in his home-based workshop in Lismore or through his many travels in Australia.

Workshops range from university campuses to specialist woodworking schools and have included those who enjoy the relatively new community-based social phenomenon known as ‘The ‘Mens’ Shed’.

His cabinets are a palpable expression of his devotion to the Australian way of life and the bountiful beauty of his country.

How he began and the value of an old-time apprenticeship

Geoff treasures the earliest memories of his parents. His mother, Ruth, worked on the end of a cross-cut saw in the 1950s, helping his father David, a sleeper and girder cutter, to cut down trees for processing.

Growing up as part of a simple bush lifestyle left a lasting impression on Geoff.  He began his working life as an apprentice cabinetmaker at Brown and Jolly, a typical main street store catering for everything for the home in country towns all over Australia in the 1950s and 1960s.

There, he revelled in the experience passed on by traditional woodworkers. He learnt about furniture repair and restoration, piano maintenance and repair, curtain manufacture and many other skills now usurped in Australia by foreign imports, mass production and the inevitable decline of the value of fine craftsmanship.

In 1973 he went into business for himself, and now takes commissions from people while still developing his skills to become a living example of the epitome of the term ‘master craftsman’.

His first major cabinet was built for Australia’s bicentenary and was completed in 1988. That cabinet still resides in the Hannah household.

He dedicated his second cabinet to his father and it was affectionately known as ‘Dad’s Cabinet’. Purchased by the Australia Fund, it is now permanently displayed in the private entrance hall at the Governor General’s residence at Yarralumla and has since become known as ‘The Yarralumla Cabinet’.

His ambitions soared and the sale of the Yarralumla Cabinet financed the making of ‘The Australiana Cabinet’, a much larger, major piece of work. Despite seven years of trying to sell the cabinet to an Australian entity, it was bought by a private collector from Antwerp, Belgium.

Now there is the Hannah Cabinet, a six-year labour of love. Completed in 2008 and dedicated to his family, this most ambitious project has resulted in a 2.4m wide by 2.4m high masterpiece that sits in the entry foyer of Bungendore Wood Works Gallery until early November.

The cabinet has been attracting levels of interest rarely experienced in Bungendore. 34 timber species, 17 precious and semi-precious gems and stones, 4 rare shell varieties and 23-carat gold leaf make up this unique work.

It has 18 doors and 140 drawers, a small number of which are hidden and only accessible via the secrets of their locking devices known only to Geoff and eventually to be passed on to the owner.

In several demonstrations for enthralled audiences at the Wood Works Gallery, what comes over most from this gentle, unassuming Australian is the underlying and undeniable level of passion that this craftsman employs in his quest for excellence.

The Hannah Cabinet deserves wider recognition and should remain in Australia in a national public institution to thrill Australians and visitors to this country for decades, if not centuries, to come.