Skip to content
You are here
Home > Living Today > Science > Azaria Chamberlain: he held vital key to the case, but was ignored 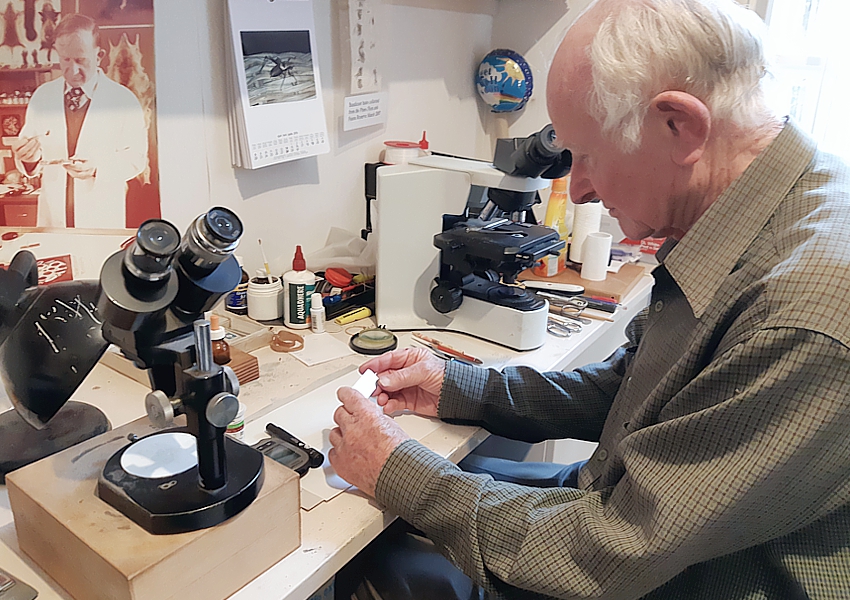 I FIRST MET Swiss-born Hans Brunner, a biological scientist and author at a community meeting at a local wildlife sanctuary. Brunner was refreshingly passionate about wildlife, in particular, the Southern Brown Bandicoot — a small ground-dwelling marsupial that had become extinct on the Mornington Peninsula.

He loudly lobbied government for decades for the establishment of predator-proof sanctuaries for the species. I was impressed. After the meeting, we chatted and discovered our mutual love of singing. At nearly 90 years of age, he was still a fabulous yodeller. He proudly handed over a CD recording of him leading a Swiss choir.

A friendship began and what I learned about Hans and his life’s work, including the most famous miscarriage of justice in Australian history, was intriguing, to say the least.

Lover of flowers and animals, and a world expert on mammal hair

I travelled to the seaside suburb of Frankston to talk to Hans about the long and complicated case of 2-month-old Azaria Chamberlain who disappeared from a tent in Alice Springs in August 1980. 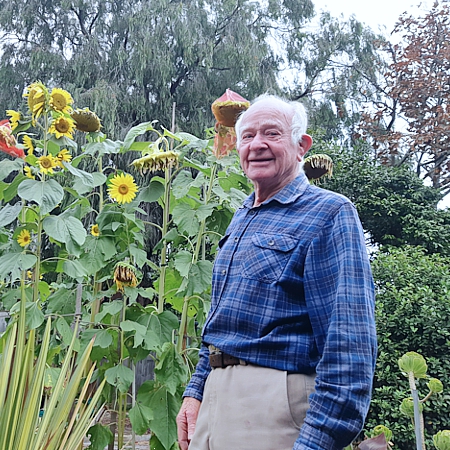 In October 1982 Azaria’s mother Lindy was wrongly convicted and sentenced to life imprisonment for her murder. Her father Michael was given an 18-month suspended sentence as an accessory after the fact. An incredible injustice had taken place.

Hans’ forensic evidence about the animal hairs found on Azaria’s clothing was a vital key for Lindy’s eventual exoneration.

Hans shuffles to his locked screen door to greet me into his home, a large detached house in a quiet leafy street. We tour his garden, adoringly curated with long-stemmed roses, hanging cactus, potted orchids and the most impressive sunflowers I have ever seen!

He likened the sunflowers’ faces to massive showerheads that he pretends to shower under on a sunny day. Like his sunflowers, Hans stands lean with a bright, happy face and is more than willing to share his wares with the locals. He later gives me a plastic bag full of sunflower heads filled with seeds for my pet parrots.

We settle in his spacious lounge room. The passing years haven’t reduced his passion for the Chamberlain case. He prepared for the interview laying out documents, books and paper clippings on the sofa.

The dingo done it

In 1980, Brunner was working as an ecological scientist at the state government-funded Keith Turnbull Research Institute. The institute was lucky to have him work on their feral species eradication program. His development of mammalian hair analysis had made him a world leader in the field. In 1974, he authored a textbook of his findings The Identification of Mammalian Hair.

Environmentalist author Eric Rolls described Brunner in Norman Young’s book Innocence Regained: The Fight to Free Lindy Chamberlain as ‘the world authority on identification of mammals by hair’ and ‘singularly brilliant’. Young himself thought him highly relevant to the Chamberlain case due to “the fact that in the course of his career he has examined hundreds of dingo hairs…when it comes to animal hair, he is quietly unapologetic about the superiority of his knowledge”.

When baby Azaria went missing, Hans wondered what the police were doing with the baby’s bloodied singlet and jumpsuit found near Uluru one week after her disappearance. Expecting that there would be hairs found on the jumpsuit he called the Northern Territory police and asked if he could examine the clothing.

The policeman’s reply caught Hans off guard: “Ah no, it can’t be done…she’s done it anyhow”, and he hung up the phone. “He never even said goodbye” Hans exclaims in his thick Swiss accent. “That policeman didn’t want me to find out anything that would have linked the dingo with the disappearance of Azaria”. He recounts how he hung his head for a bit before he tried, in vain, to contact them again. Unbeknownst to Hans that was not the end of his involvement in Lindy’s bid for justice.

After the Chamberlain’s convictions in 1982, their solicitor Stuart Tipple continued gathering evidence for an appeal. There had been animal hairs found on Azaria’s clothing. Young outlined in his book that at the trial the Crown had claimed these hairs were probably cat hairs and when pressed by the judge the forensic scientist working for the prosecution concluded the hairs were not dingo hairs.

The Crown pushed this conclusion in the final address to the jury. The defence was keen to have the hairs tested again by an independent scientist and set out to find one. They were elated to discover that such a world expert not only lived in Australia but also answered the phone as soon as they called.

In September 1984, Brunner attended the High Court in Canberra to examine the jumpsuit. He brought his Olympus microscope with him. Brunner remembers “they took me down to the ‘dungeon’. It was a storage room under the court where they held evidence”. The room contained boxes of items including Azaria’s jumpsuit, singlet and the Chamberlain’s camera bag.

He held the jumpsuit and remembers how profoundly moving the moment was. “Here was the thing that the poor baby was in when she died, it still gives me a feeling of sadness”. The hairs, already removed from the clothing, were mounted between two glass slides. Within seconds he exclaimed they were not feline hairs after all. Within the hour he concluded that both slides contained canid (dog) guard hairs.

Young, retelling the story in his book, noted Brunner had no doubt about the accuracy of his conclusions. Brunner assured Tipple that the identification was unequivocal.

The website lindychamberlain.com carefully time-lined the case including Lindy’s eventual release in 1986 after they found Azaria’s jacket during a search for the remains of a man who had fallen at Uluru. Brunner’s evidence was presented to the Morley Royal Commission into the case in 1986–87.

The commission cleared the Chamberlains of any involvement in Azaria’s disappearance. However, it took 32 years for Azaria’s death certificate to be officially changed, in 2012, as ‘death by dingo’.

Hans met the Chamberlains at one of their many court appearances. They shook his hand and sincerely thanked him for his efforts with the case. When the Northern Territory Supreme Court exonerated the Chamberlains, in 1988, Hans was “totally relieved for her and for justice to be done. I was very sad that she had to go to jail for three years and that I could have possibly helped her avoid that”.

He lives with some guilt that he didn’t insist on the police taking his advice but admitted: “I always learned in my life that if I wasn’t wanted, I wasn’t going to push myself on anyone”. It was only when the defence found Brunner during Lindy’s imprisonment that he was able to give his expert opinion. “They [the prosecution] didn’t give me any credit for my opinion; it didn’t suit their story that she was guilty.”

As we say our goodbyes in his front garden and rejoice to the beautiful song of local magpies, Hans breaks out into a high-pitched and exquisitely clear yodel. Indeed these intelligent birds have no hesitation in responding to the beckon of a master — if only all humans were the same.