Skip to content
You are here
Home > Environment > Battle for the bush: NSW Government accused of failure to act on alleged illegal land clearing 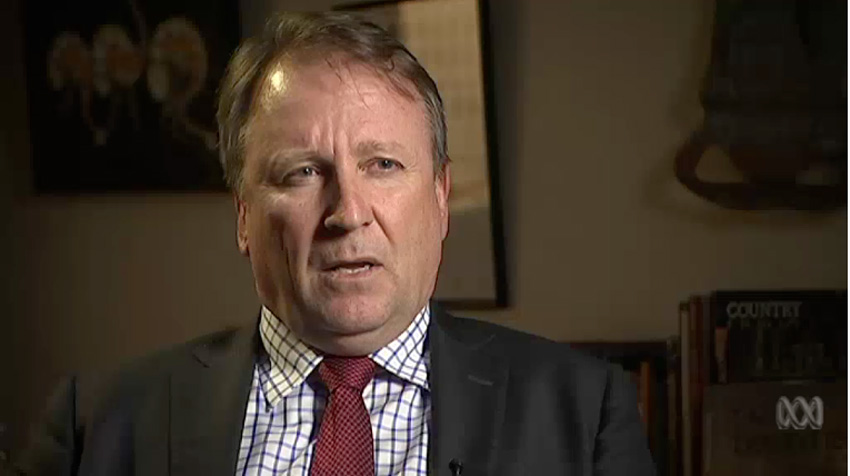 The shocking 2014 murder of environment officer Glen Turner by farmer Ian Turnbull highlighted the ongoing battle being waged in the bush, where huge economic pressure for higher returns clashes with the need to conserve native vegetation.

Australia now has the 5th highest rate of land clearing in the world.

In 2015, a study by NSW Parks and Wildlife found that 60,000 hectares was being cleared per year in the state — a four-fold increase on previous State Government figures.

Since losing their properties to the bank, the Priestleys say they have watched with growing anger and disbelief as native vegetation has been cleared — they claim without permission — to expand wheat fields.

For two years until end of 2015, the Priestleys collected evidence of alleged illegal clearing and sent it to the State Government watchdog, the Office of Environment and Heritage (OEH).

Last year, without explanation, the OEH halted its investigation.

“I’ve grown up on that land, I’ve been out there my whole life. It’s devastating to see that a large conglomerate can come into this community, it seems like they have a special privilege to just clear what they want.”

Mr Priestley has photographed what he claims is the aftermath of broadscale land clearing, including images of several bulldozers and piles of smouldering native vegetation.

“You can virtually clear the size of the moon and get away with it but you can be in trouble for trespass by taking photos.”

Approvals for native clearing are required to be on a public register.

The NSW Environmental Defenders Office recently searched for any approvals given to the Harris business to clear land on its properties west of Walgett.

“We have searched those registers. They’re complex registers. You navigate through them by GPS coordinates,” EDO chief solicitor Sue Higginson told Lateline.

“With the resources we’ve had available to us we have searched those registers and we have not turned up any approval for the native vegetation clearing that the Priestleys have witnessed on the Harris properties.” 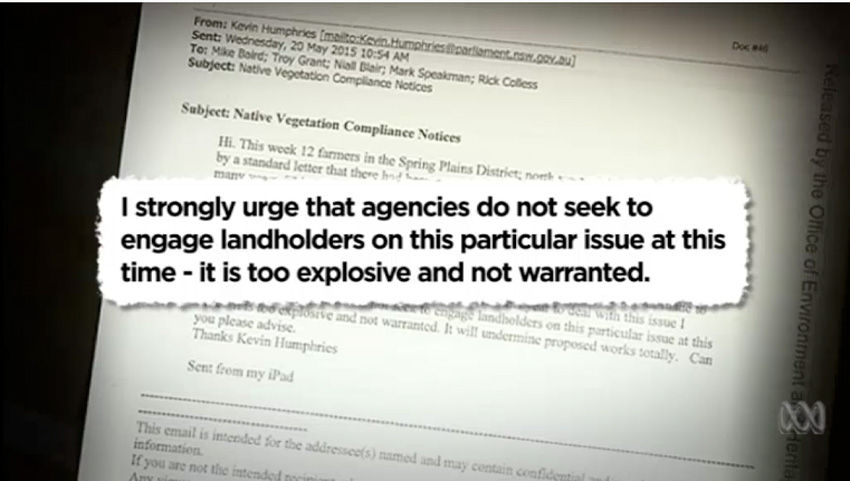 Lateline can also reveal that the Office of Environment and Heritage dropped an investigation into alleged illegal clearing by 12 farmers in the nearby Wee Waa area due to what it believed was the risk of a “catastrophic consequence” if environment officers entered farmers’ properties.

The decision to suspend the Wee Waa investigation was the result of an email sent in May 2015 by Nationals state MP Kevin Humphries, urging the investigation be dropped because it was “too explosive” and “not warranted”.

Mr Humphries, the Member for Barwon, warned that farmers were looking to blockade any attempt for an on-site visit by OEH and if the visits went ahead it would be “the start of something that will escalate very quickly between farmers from around the state and the authorities”.

Despite Mr Humphries’ email, there is no evidence that the farmers were planning to blockade OEH inspectors.

Mr Humphries denies the email perverted the course of justice.

“That doesn’t uphold anywhere. I mean how long ago was that action? I’ve not had one complaint from anybody, any jurisdiction, any agency, any media outlet to say that we didn’t get to a good outcome there where people didn’t have to confront each other.” 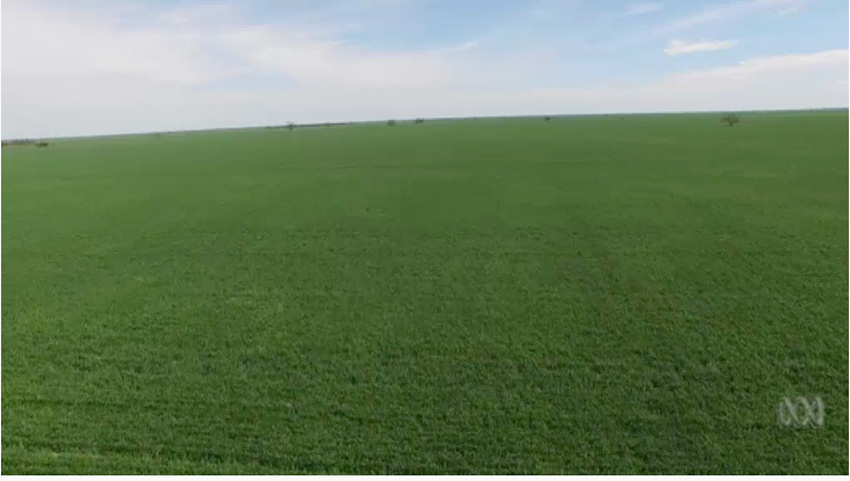 Former station manager Bill Keene has accused the OEH of being unwilling to stop big players in Australia’s agricultural industry.

“No doubt they’re monitoring it, they’re just not doing anything. They’re all noise,” he said.

He was invited by the OEH to be a witness in an investigation of the Harris company’s alleged illegal clearing before the Priestleys complained to the agency.

Mr Keene claims he provided information of illegal clearing on Brewon station to the OEH based on satellite imagery of the property.

He left the area a decade ago but he has reviewed recent aerial footage of the Brewon station obtained by Lateline which he compared to a 2013 Google map.

“I’ve seen from one end to the other and I know the country inside out. All this country to the west has all been cleared and sown under wheat.

“There’s been a massive expansion of clearing and to the best of my knowledge it’s been done without permission.”

“It’s all wheat now. That country’s fragile out there and I don’t see why people should blatantly illegally clear things like the TSRs [trade stock routes].

“They’re there for a reason, they’re Crown land. They don’t own them so why can they try and squeeze an extra few bags of wheat or whatever?”

Tony Graham, the manager who succeeded Bill Keene on Brewon, said the previous station owners would have loved the opportunity to farm more country.

“We did contact the relevant authorities to try and get that done but no permits were ever issued and under no circumstances was I aware we’d be able to do that.

“That’s the reason why the Native Vegetation Act was put in place, just for the protection of that native vegetation.”

When the Harris business bought the property in 2010, Mr Graham was told his service was no longer required.

A year later, the Office of Environment and Heritage asked him if he too would be a witness against the business.

“I was asked which country we had set aside for farming and for grazing and it was pretty obvious from those aerial images that it was chalk and cheese as to what had occurred to the country post my time as manager of Brewon.

“Just on those aerials in excess of 5 to 8,000 acres that we certainly didn’t have anything to do with, country that I believe had been cleared.”

After two years of consultations, Bill Keene and Tony Graham were told the Harris investigation would not go to prosecution.

Tony Graham: “I was very upset. I was very angry given the time myself and another of the previous managers put into it.”

It denies all allegations of illegal land clearing.

It dismisses Chris and Claire Priestley as bitter losers, accuses the family of waging a vicious hate campaign, and highlights the fact the siblings’ mother apologised for earlier defamatory statements, which she also retracted.