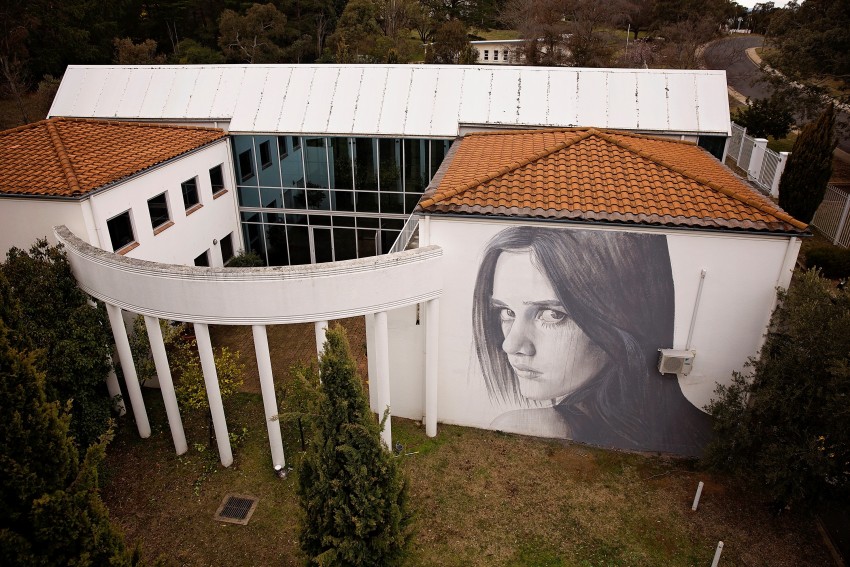 As you approach the Spanish Embassy in Yarralumla, it is hard to miss what Melbourne street artist Rone has added.

On a dreary Monday morning as I drove up, the eyes were staring straight at me from a nine by six metre mural newly added to the side of the embassy, the winner of the inaugural Urban Art Prize.

The prize was launched this year by the embassy for ‘street art’ made by Australian artists, or those who reside here.

Painted over the weekend of the 22 August, ‘Sarah’, now adorns the wall facing the street – the first thing you see as you pull up to the gates of the Embassy. This was a key consideration, as Deputy Head of Mission Cesar Espada explained.

They wanted something that could be shared. The elegant, intimate style of Rone, which is a street art paradox compared to the usually harsh styles adorning walls, achieved this.

In discussing ‘Sarah’, Rone said that “This work of Sarah is about creating something in a public place that has this intimate feel to it.” Having avoided painting on white walls for years, Rone said it was a personal challenge, to “get a tonality and depth on something that is white”.

Rone is originally from Melbourne, and has progressed from being at the forefront of Melbourne’s street art in the early 2000s as a part of the Everfresh Crew. He now travels the globe, leaving his indelible mark in cities such as New York, Paris, Tokyo, Christchurch and Port Villa. He would like to see more street art in Canberra, particularly more legal spaces where the city’s artists can express themselves.

A big part of Rone’s work revolves around the concept of decay and wearing away. His work blends into the environment and begins to fade away naturally. The artist prides himself on this, as he “would love it if it was fading off the wall; the perfect point before it disappears”. You can see this in his dripping style of painting, as “it could almost wash off the wall – it’s got a delicate nature to it,” and that is where you find the fine line.

“It is the exciting nature of street art … that it is not going to last forever”, He used the metaphor of having your favourite band play down the road from you. If it were to be a once off, you would go and see them, and love it. But if they played there every night, you would only go occasionally, and grow tired of them. Therefore he sees this as making his street art “far more special and important, as it won’t last”.

Rone’s involvement means a lot to him, as there is a personal connection to Spain. His mother was born in Madrid, and she was “over the moon” and she has been sending photos back home to family and friends. He describes it as a “great honour”.

After this piece, Rone is moving on to works in Milan and then Detroit. Follow his work at www.r-o-n-e.com