Skip to content
You are here
Home > Living Today > Living with Nature > Birdbath, food or water? How to attract your favourite birds to your garden 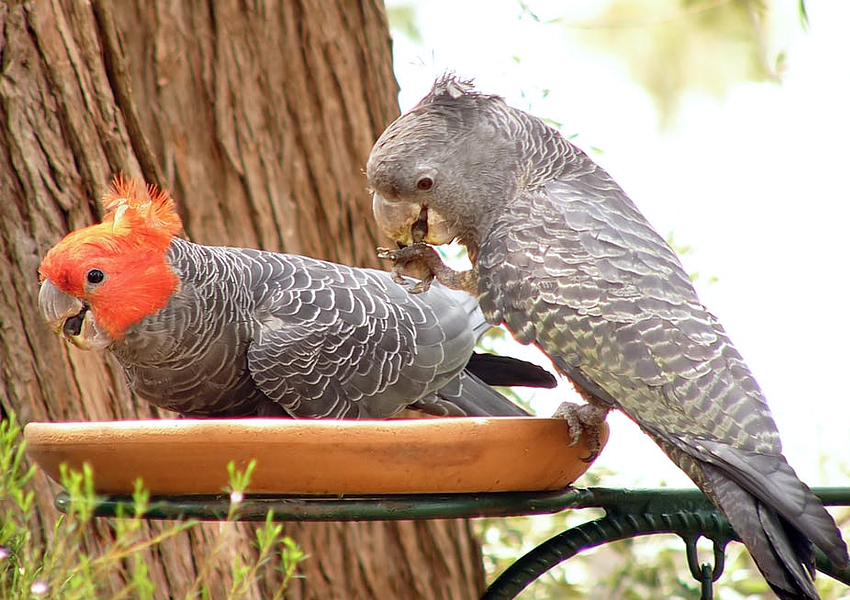 THIS SUMMER, when a rainbow lorikeet or kookaburra comes to visit your home, what will you do? Will you offer them a slice of apple, or simply watch until they take flight?

It brings many people joy to provide food and water for birds, to encourage them to stay a while and be given the chance to observe them more closely. But some people are reluctant to interact with birds in this way because they’re worried it might damage the birds’ health.

In contrast with other countries, little research has been done on the effects of feeding birds in Australia. As a result, there are no established guidelines around how to feed and provide water for local birds.

That’s why we ran the Australian Bird Feeding and Watering Study. We asked nearly 3,000 people to monitor the birds that visited their feeding areas and birdbaths. We wanted to know if there was a difference in the species that visited different types of gardens.

We examined the numbers and types of birds visiting:

The early results from the winter stage of the Australian Bird Feeding and Watering Study suggest that if you provide food and water, you will get more birds in your garden. But the species you attract will depend on what exactly your garden has to offer. 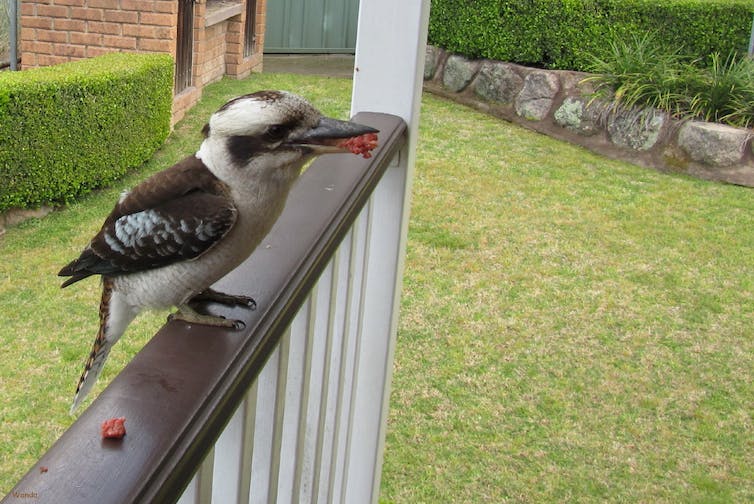 Kookaburra having a snack. (PHOTO: supplied by Wanda Optland, provided by author.)

Granivores are seed-eating birds. They include species such as parrots, crested pigeons, sulphur-crested cockatoos, crimson rosellas and galahs.

We noticed a spike in the number of granivores in gardens where both food and birdbaths were provided. But when food was on offer, fewer granivores chose to use the birdbath. We don’t yet know exactly why this is, but it could be because these seed-eaters need less water, or they can get it more easily from other sources than they can food.

Also, most of the bird food sold in shops is seed-based. People who buy these products will naturally attract more seed-eating birds to their garden.

We were, however, surprised to see crested pigeons visiting gardens where food was provided. These birds are only recent urban arrivals, and were previously restricted to semi-arid environments as opposed to the more urban areas where most of our citizen scientists lived. But crested pigeons are very adaptable and now compete fiercely for food and territory with the introduced spotted dove in some Australian gardens. 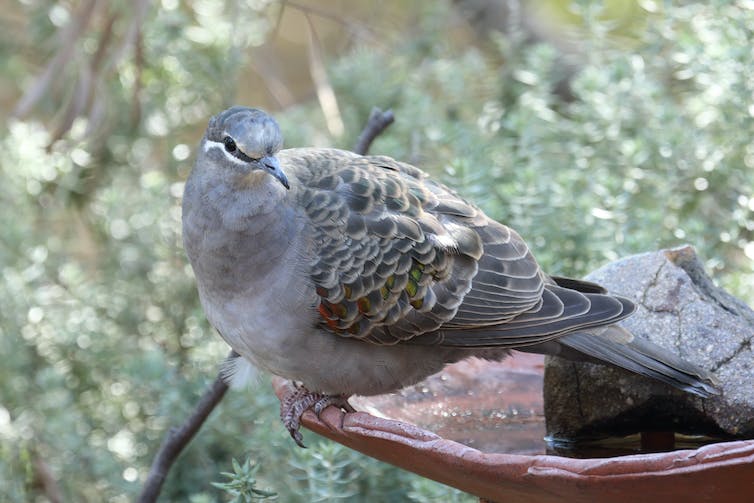 “Small” nectarivores are nectar-eating birds that weigh less than 20 grams. The main birds in this group are New Holland honeyeaters, eastern spinebills and Lewin’s honeyeaters.

“Large” nectarivores are nectar-eating birds that weigh more than 20 grams. These species including noisy miners, rainbow lorikeets and red wattlebirds – seem to prioritise food over birdbaths. This may be because they’re looking for a source of protein that they can’t easily find in their natural environment.

Honeyeaters – such as Lewin’s honeyeaters, blue-faced honeyeaters and noisy miners – will forage on nectar but will eat insects as well. They switch from one to the other, but once they have found their meal they will defend it vigorously from other birds.

Insectivores feed on insects, worms, and other invertebrates. Some insectivore species include superb fairy-wrens, willie wagtails and grey fantails.

Insectivores are most attracted to gardens where both food and water are provided. While superb fairy-wrens were frequently found in gardens where food was provided, willie wagtails and grey fantails preferred to visit gardens where only water is provided. 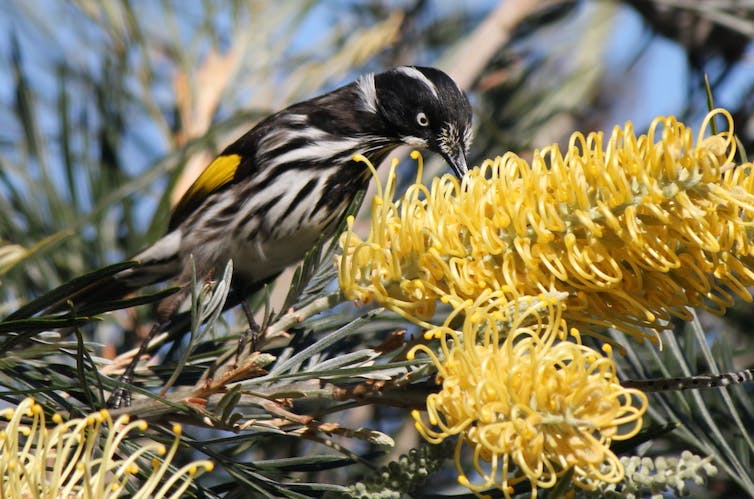 Honeyeaters will forage on nectar but will consume invertebrates as well. (PHOTO: Wanda Optland, supplied by author)

Many people have told me how confident fairy-wrens and willie wagtails can become around houses and gardens. These tiny birds can be bold and aggressive, and can work together to get what they want. A mum and dad fairy-wrens will conscript their older children into looking after younger ones – and siblings who refuse to help find food and defend territory may even be kicked out of the family. So these tough breeds have a competitive advantage in their new urban environments, and aren’t afraid to mix with or even chase off bigger birds.

You may be wondering exactly what type of seed to put out to attract which granivore, or which meat attracts a carnivore like a Kookaburra. I’m afraid we can’t yet say for sure, as we are yet to analyse the data on this question. Watch this space. 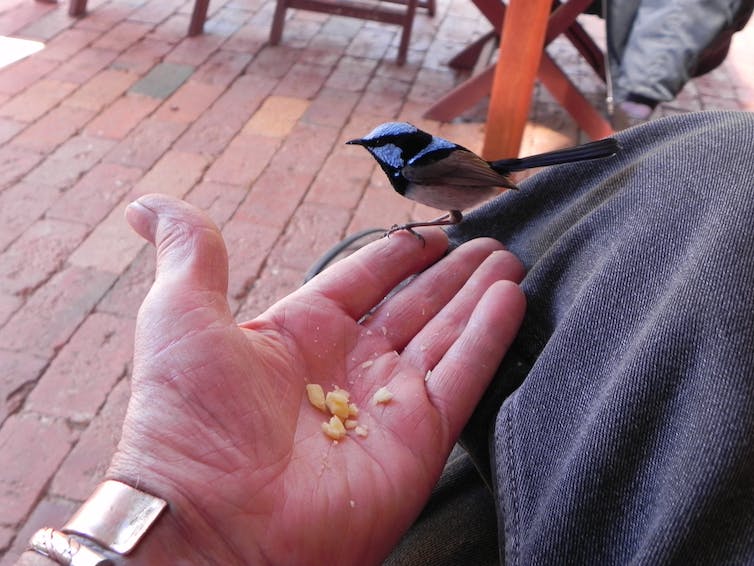 Bolder than they look – a fairy wren eats from a citizen scientist’s hand. (PHOTO: Peter Brazier)

Could birds become reliant on humans for food?

Many people worry that birds will become reliant on humans to provide food for them. But this mightn’t be as big a concern as we once thought.

The birds turning up at feeding areas and birdbaths are species that are highly adaptable. Many Australian birds live long lives, and relatively large brains when compared to their European counterparts. Some experts have argued that some Australian birds have evolved a larger brain to cope with feast and famine conditions in the Australian environment.

Of course, Australia also has birds that have highly specialised diets or habitats, and they’re the ones usually most threatened or limited to one territory – birds like the regent honeyeater or ground parrot. In this study, we’re concentrating on birds that are adapting to urban areas and turning up at birdbaths and feeding areas in gardens. 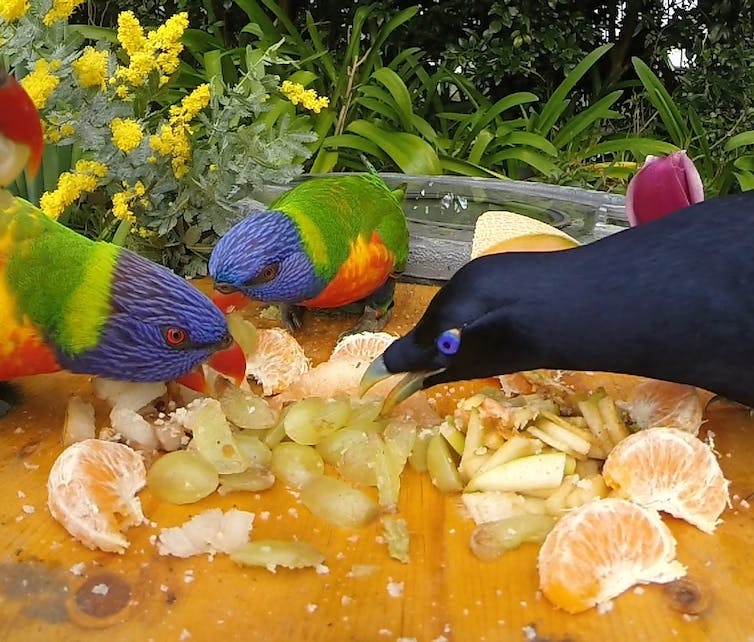