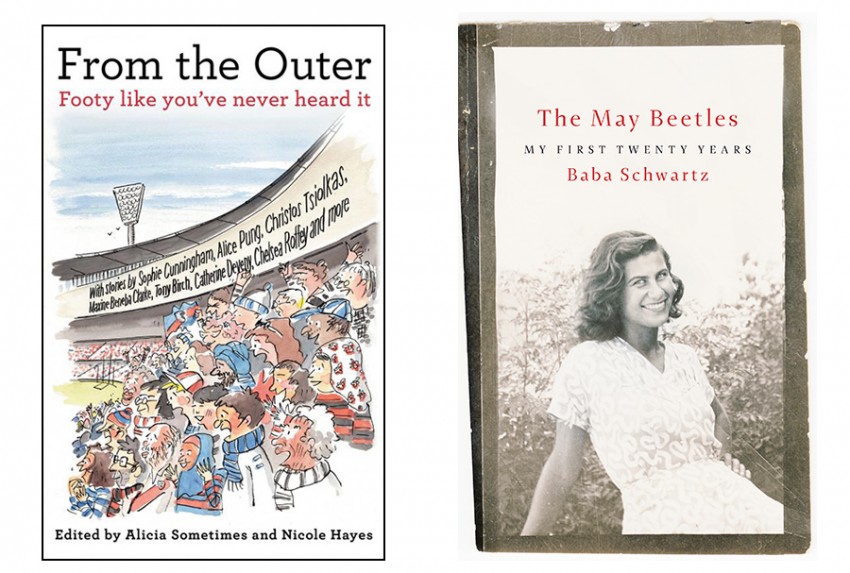 A day at the footie

Mention a writer called ‘Flanagan’, and your average reader will reply: “Ah yes, Richard Flanagan, the Tasmanian novelist!” – but the one I mean is Martin Flanagan, his brother, a newspaper columnist who happens to write brilliantly about Australian football.

I’m not a footie follower, but I always enjoy Flanagan’s writing, and I was pleased to note that he was acknowledged as one of “a huge range of literary folk” who assisted in some way in the writing or editing of From The Outer (Black Inc 2016), an anthology.

Indeed the story by Nick Cadle, Footy Dreams in Struggle Town almost had me persuaded that Australian Rules is truly THE Australian sport, not just a Victorian oddity. He has an ingenious theory involving the Indigenous sense of place, which translates into the free-flowing formlessness of AFL.

There’s a lot in this book, much of it from writers who are not obviously footie fans. To start with, Chelsea Roffey, who isn’t really on the Outer as she was the first woman to be appointed a professional AFL umpire, and umpired the Grand Final in 2012.

Then Miriam Sved, who wasn’t interested in football at all, but fancied – her word – “a funny, small intense woman, another Pies supporter” whom she subsequently married (in San Francisco) and who got her into the game. Another view is from the Purple Bomber, Jason Tuazon-McCheyne, a footy fan from way back, who through sheer persistence persuaded Essendon Football Club to establish a LGBTI supporter group.  Other clubs have followed suit.

Jason was particularly incensed when someone behind him started abusing the umpires, shouting: “Poofters! Faggots!” Very bravely, Jason, who describes himself as not a confrontational or antagonistic person, caught the guy’s eye: “’Look,’ I said quite calmly, ‘I’m gay and this is my husband. Can you please not use the words poofter and faggot? They’re really offensive.’ He didn’t say a word for the rest of the game.”

This is a fine varied collection of essays, with a couple of poems, remarkable for its variety, and given the place that footie occupies in the plumb centre of mainstream Australia, remarkably non-mainstream: gay couples (of both sexes), dedicated young girls out-marking their brothers; Indigenous heroes and Indigenous unknowns, but according to Carlton supporter Rebecca Lim not many Chinese. (Is this true of other codes? Local rugby names like Ah Wong come to mind, but perhaps this is Chinese by way of the Islands).

Thirty writers contribute to the book, so inevitably there is some unevenness of tone: Stan Grant, for example, whose serious piece on the booing of Adam Goodes first appeared in The Guardian. But there’s nothing which attempts to fly over the boundaries, even Catherine Deveny’s characteristically spirited iconoclasm. (“Melbourne is the love of my life. But I hate football.”)

“How did I ever think this code was chaotic?” asks Pommie import Alan Duffy, now a Hawks supporter. Up there, Cazaly! Grand final day is the highlight of the year.

In an interview, songwriter Leonard Cohen explains that his quite jaunty song Dance Me to the End of Love was written when he learned that a string quartet had been pressed into service to play classical music, as Jewish camp inmates were herded into the gas ovens.

This horrible story was in the back of my mind as I read The May Beetles, My First Twenty Years, by Melbourne writer Baba Schwartz.

In a small town in eastern Hungary, in a time of innocence, Jews and Christians lived amicably as neighbours. Young Baba and her two sisters were part of a warm, loving and cultured family, faithful in their observance of Jewish customs, keen on reading, writing and music: good citizens in a peaceful community.

This was in the 1920s and 1930s. Baba was born in 1927, attended kindergarten, a Jewish junior school and a non-Jewish high school. By this time Hungary had already passed laws prohibiting Jews from attending university.

In 1944, when Baba was sixteen, the Germans were in Budapest, and ferocious endemic Hungarian anti-semitism was unleashed. The family was sent first to a featureless rural ghetto, then a three day northward train journey into Poland, crowded into cattle-trucks, destination Auschwitz.

“What I did not know, what I could not have known, was that we had come to the gates of hell.”

Surprisingly, Baba and her mother and sisters survived, though their father died in the gas chamber. The little party of four was transported hither and yon, from one camp to another, and on a terrifying death march to keep ahead of the advancing Russian army. They survived even this, and after the first wave of horror, managed to achieve a sort of security working for the Red Army as seamstresses and medical orderlies.

Three thousand Jews were taken from their town in Hungary – one hundred and thirty three returned.

In 1947, Baba married a handsome young Hungarian Jew called Andor Schwartz, and in 1948 gave birth to her first son, Moshe. It was Moshe who became Morry Schwartz, who writes a postscript to the book. He is today the publisher of The Quarterly Essay, The Monthly, The Saturday Paper, and the manager of publishing company Black Inc.

It was in 1949 that the Schwartz family decided to leave Hungary, and – with the aid of people smugglers – walked under cover of night, through the forests, to the Czechoslovakian border. From there, by way of Austria and Italy, they sailed to Israel, and in 1958 to Australia.

The book finishes with a poem to Baba’s father: “Father, do you hear me? / I am here to greet you, a content old woman, / By my side my husband of fifty-seven years …”

And, chillingly, pages of photocopies of family documents found at Auschwitz and Buchenwald.