Skip to content
You are here
Home > Region > Comment > Bungendore Park to high school grounds? Unhappy residents tell why this is a bad (and unnecessary) plan. 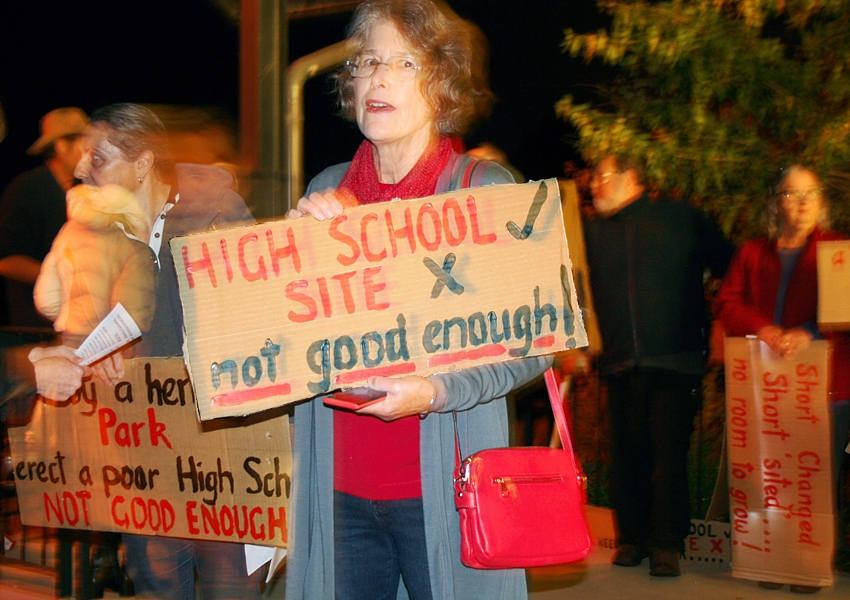 Her article ‘In Don Harwin’s Sydney, what should be a project of sacred trust is a problem to be fixed’ is a more recent contribution.

This zeitgeist of “progress is more important than preservation” is being played out in Bungendore.

Members of the Bungendore Park Action Group have taken up the call to prevent local member John Barilaro and an enthusiastic Queanbeyan-Palerang Council from handing over to the state for a school a central crown land park (Bungendore Park) and a portion of the Common — in this case a large proportion of the dog off-leash area, as well as various other community assets.

The Bungendore Council Chambers, Bungendore Community Centre, the 30- year-old community-built local swimming pool, and the block of land reserved for a future Abbeyfield site, will be sold by Council for a tidy sum (so-far undisclosed millions — a windfall for Council) to the Department of Education for a high school. That section of a major town centre arterial road, Majara Street, will also be closed off and demolished.

“But we are going to preserve the heritage railway precinct, the cenotaph, the Osborne Memorial,” is the cry from the proponents of the school’s siting.

These heritage landmarks, as well as others — such as the old Post Office, the original Primary School building, the School of Arts — will be dwarfed and diminished.

Planned roundabouts at the eastern end of Gibraltar Street will encroach on a lovely 19th century town plan, and importantly, what is left of Bungendore Park will be out of bounds to the public during school hours.

The only traffic study published on the school Infrastructure site is three pages long (two pages long if you discount the illustration on page 2) and simply concludes: “Accordingly, it is expected that the new high school in Bungendore will have a negligible impact on the operation of the adjoining road network.” Residents believe this is blatantly wrong and patently ridiculous, and just one more bureaucratic skirt around due process.

Residents speak loudly but who is listening?

Most older country towns have a central park. At a public meeting on 28 April in Bungendore over a hundred residents voted to preserve their park.  (Dedicated Crown Land, 3 October 1884.)

On 4 May, at a Council community meeting, about 30–40 protestors with placards came to voice their concerns that the high school would be more adequately and generously built on the outskirts of Bungendore, on a greenfields site. Council CEO Peter Tegart’s response was “If we sell these assets, you will get a new swimming pool”.

Then, on 11 May 2021, The Department of Education, specifically School Infrastructure, held an ‘Information Hub’ which was much publicised as a venue at which people “could have their say” about the future school.

Again, Bungendore residents who wanted to be heard about a less cramped and disruptive siting for the school, turned out in force. Despite the fact the department in the past had let people register their opinions (objections or approvals) of the school siting in writing, this time, they neither took, nor kept any records.

Our Save-the-Park group clearly outnumbered those who came to defend the Barilaro/QPRC plan. Despite this overwhelming “Please don’t destroy our park” input, two days later, on 13 May, the web journal, About Regional, declared the Hub received ‘overwhelming approval’ for the plan and cited Deputy Premier Barilaro with particular reference to the Information Hub:

“Member for Monaro John Barilaro said he had received lots of positive feedback from the local community following this week’s community meeting.

“This is a project that has been talked about for years and the majority of the community is excited that we’re getting on with delivering this commitment,” Mr Barilaro said. “I’ve spoken to parents and even kids who will be attending this high school and they can’t wait for their new school to open. This high school will be a game-changer for Bungendore and surrounds and will benefit generations to come.”

Majority? We witnessed the opposite community sentiment at the Hub, which About Regional referred to as the ‘community meeting’.

And then they brought in the police

The deliberate misinformation about the feedback the Information Hub received was one thing, but another was the police presence. About 45 minutes after the hub session started, a police car pulled up and parked haphazardly, and two policemen, one armed with a tazer, jumped out strolled into the gathering. They did look amused, when instead of finding a tribe of bikies, they came across a bunch of gossiping, mostly harmless residents. The policemen finally took up a post at the School’s Gibraltar Street entrance.

Were they sent there to intimidate us?  We were angry about that. A security guard was also present. We are not used to such a police presence in our country town.

Here’s a win-win and a question

Mr Barilaro could appease all of the community and place the school on Bungendore’s outskirts. It would certainly cost the Department of Education a lot less money.

Why the determination to press ahead, despite so much community opposition? Residents are asking: Could it be the National Party/Coalition member for Monaro is trying to please a politically-sympathetic Council [that will financially benefit]? The local member, it can at least and most generously be said, is spending money hand over fist. Some people believe it is to convince residents that the council amalgamation was a good thing.

Many believe the amalgamation of Queanbeyan and Palerang councils has resulted in the disenfranchisement of former Palerang residents. This high school project is a perfect example of decisions being made in Queanbeyan without consultation with Bungendore residents. The disregard for heritage and amenity in Bungendore, in this instance, is of epic proportions.