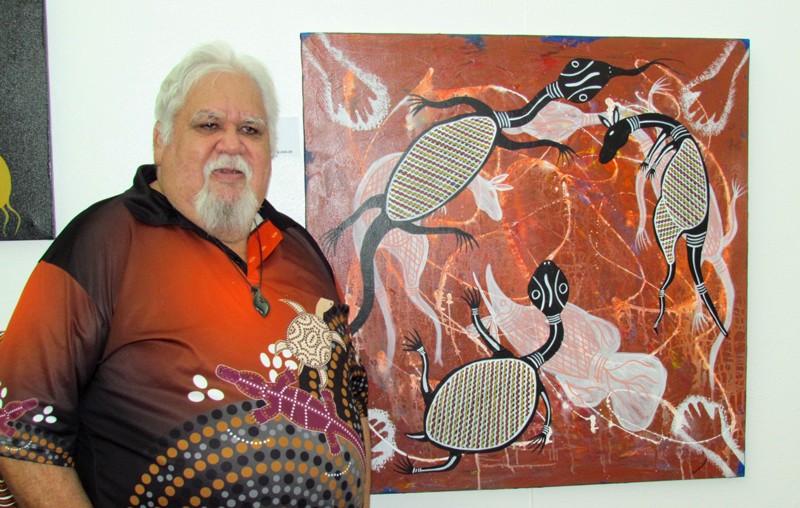 The Burrunju Aboriginal Arts Gallery on the shores of Lake Burley Griffin (west of the ANU) is of the region’s better kept secrets, something the Huddleston family would rather were not so.

Michael (Garmarroongoo) Huddleston, resident of Queanbeyan, whose paintings are in international collections, has just held a major exhibition of his latest works there. Some remain on the wall.

Huddleston and his niece Linda, also an artist and coordinator of the gallery’s arts and culture program, chatted with the Bulletin about the gallery and how it came about.

“It was my father’s dream to open an art gallery in Canberra run by Aboriginal people,” said Linda. Bob and Margaret Huddleston realised that dream in 2008 with the assistance of the ACT government and arts grants funding.

The gallery now exhibits 40 artists and also uses the space for art workshops for young people. The next exhibition will be the work of Karen Riley from Sydney. She is related to the Wiranjuri group from the Dubbo area, one of the biggest in NSW.

The ACT government owns the site and the Burrunju Aboriginal Corporation leases the gallery part (there is also an under-used theatre and a function/conference centre in the complex).

In the downturn of arts funding, this gallery and its endeavours like others are finding life harder. Commissions from the sale of paintings “just pay the rent” and grants have paid the minimal staff, says Linda.

Mick Huddleston draws his inspiration for his paintings both from his mother’s and his father’s art traditions.  Linda’s work also tells stories.

“Wave Hill in central Australia was Mum’s side where they practiced more dot painting,” says Mick.  He mentions the strike. His father’s tradition was from south-east Arnhem Land with cross-hatching and stylised forms of animals.

An 11-year strike and land rights struggle by Gurindji Aboriginal pastoral workers at Wave Hill was a major step to Indigenous land rights in Australia. The strike educated a generation of Australians. The traditional arts blossomed with the return of land and other rights in recent decades.

The Vestey family’s Wave Hill station showed how bad things were for Indigenous people after Europeans came. The cattle station was stocked in 1883 and Gurindji and other groups found their waterholes fenced-off or fouled by cattle which also destroyed fragile desert plants such as bush tomatoes.

“Dingo hunters regularly shot the people’s invaluable hunting dogs, and kangaroo, a staple meat, was also routinely shot since it competed with cattle for water and grazing land. Gurindji suffered lethal ‘reprisals’ for any attempt to eat the cattle – anything from a skirmish to a massacre. There was little choice but to move onto the cattle stations.” (source: Wikipedia)

Aboriginal people became the backbone of the cattle industry, working for little or no money, minimal food and appalling housing. Gurindji lived in corrugated iron humpies where the occupants had to crawl in like the dogs, without floors, lighting, sanitation, furniture or cooking facilities. (Think We of the Never Never.)

The Whitlam and then Fraser governments legislated the start of land rights as a result of Gurindji and other acts of resistance. 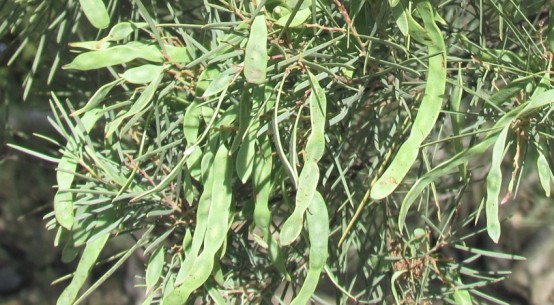 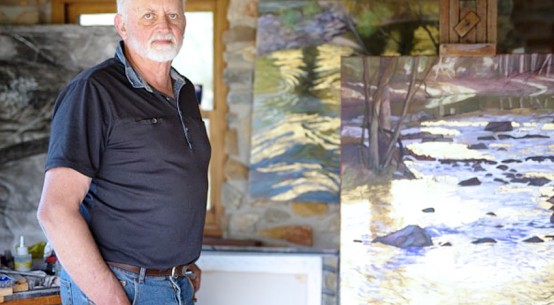 Reflecting on the treasures of the Deua and gold mining

One thought on “Burrunju Gallery celebrates Spirits of Place”