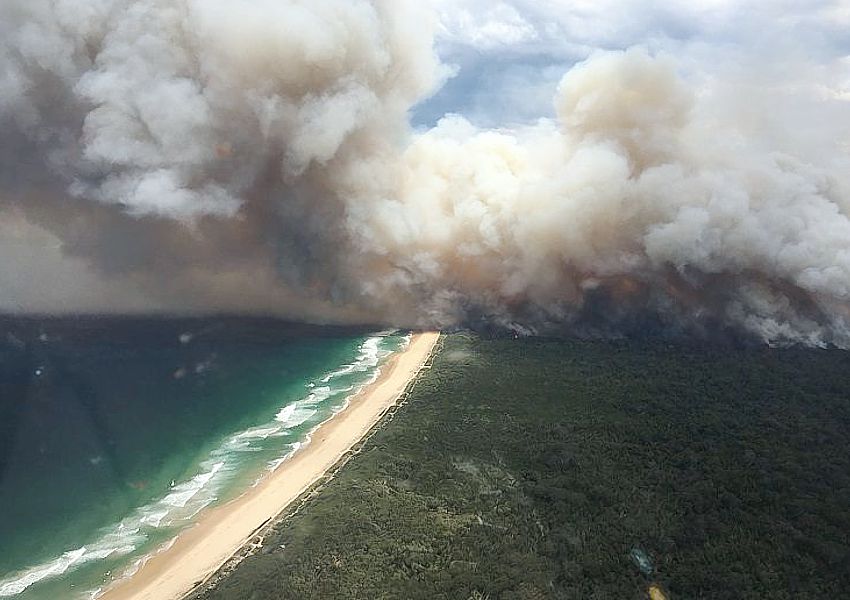 MAYORS FROM THIRTEEN thirteen councils have signed a statement calling on the federal government to acknowledge the link between climate change and the catastrophic fires that have swept through NSW and Queensland.

The federal government has so far refused to acknowledge that climate change may be central factor in the bushfires, which have destroyed hundreds of homes and claimed four lives.

ABOVE: Mayors from bushfire-ravaged councils are calling on the federal government to acknowledge the role of climate change (Ash Hogan).

“The catastrophic conditions for these fires were, at least in part, fuelled by climate change,” the statement says. “Now it is time to honestly and bravely address one of the major causes of these fires.”

The mayors call on the federal government to heed warnings from the front line and stop the blame game.

Time to talk about ‘the new normal’

Bellingen Mayor Dominic King said it was time to start talking about “the new normal”.

He said the fires breaking out in traditionally wet rainforest were unprecedented, with a dry winter and spring causing trees to shed leaves and limbs that created fuel for the fires.

Cr King accused the state and federal governments of ignoring the science around climate change.

“What we’re seeing in local government and around the world is people standing up and saying, ‘this can’t continue’,” he told Government News. “We are facing ten years of record breaking temperatures, low rainfall, diabolical drought, and now on top of that catastrophic fires.”

He said he was particularly concerned about the loss of biodiversity, the impact on the local koala community and the potential threat to four 100-year-old fig trees in the area.

“The word ‘unprecedented’ keeps popping up,” he said. “What that demonstrates it that we are experiencing fire and weather conditions that are very different to what we’ve been accustomed to.

“Obviously there is a pattern in the change of weather and that can only be attributed to climate change.”

Simon Richardson, Mayor of Byron Shire, said storms, heavy rainfall and flooding were the usual extreme weather events to affect his sub-tropical LGA. But he said changing weather had seen hotter temperatures, Melbourne-style humidity and a landscape “as dry and brown as Victoria in Summer”.

He said the government’s response that now isn’t the time to talk about the cause of the fires was nonsensical.

“If there’s a big car accident of course it’s time to talk about speeding or drink driving. There’s moments of crisis where yes, it may be uncomfortable … but as a wider community we’ve got to discuss it. Because when things quieten often the interest does.”

The joint statement is an initiative of the Climate Council, which has 115 Australian councils represented on its local government climate program and recently released a briefing paper which found the fire conditions currently facing eastern Australia have been exacerbated by climate change.

Climate change had contributed to drought, created an abundance of dry fuel and lengthened the fire season.

The paper, which draws on data from CSIRO and the Bureau of Meteorology, as well as a range of peer-reviewed scientific papers, calls on the government to develop a plan to rapidly phase out fossil fuels.

“For well over 20 years scientists have warned that climate change would increase the risk of extreme bushfires in Australia,” the paper says.

Dr Annika Dean, a senior researcher with the Climate Council, says climate change has driven an increase in temperatures across Australia, shifted rainfall patterns and made some areas drier.

“Fire danger ratings are influenced by dryness, temperature, humidity and wind speeds. When conditions are dry and hot, fuels are more flammable, and when the winds are strong, fires can spread quickly,” she told Government News.

Dr Dean said fast-tracking the elimination of fossil fuels to drive down greenhouse gas emissions as part of a global effort to tackle climate change would help mitigate the risk and severity of bushfires in the future.

— Coming to you this week from Government News; written by Judy Skatssoon.

The District Bulletin asks:
Where is Queanbeyan Palerang Regional Council on this topic?
So far keeping its ratepayers in the dark. Rumour has it that some discussion will arise at the Nov 27 council meeting.  Stay tuned.

One thought on “Bushfire mayors want climate change on the table”