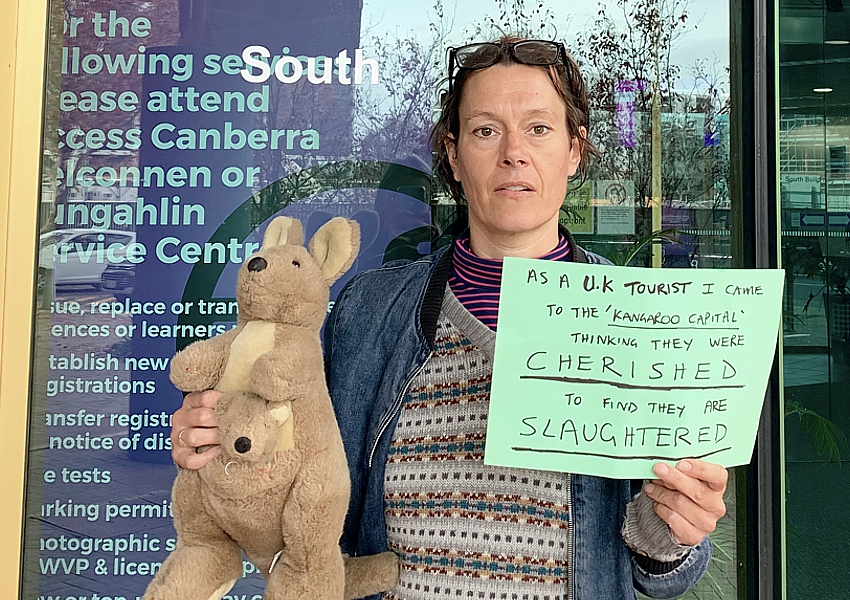 JENNY ELLIOT is a UK resident who has held peaceful vigils outside the Australian Embassy in London, hoping to educate prospective tourists about Australia’s culling of our kangaroos.

She recently visited Canberra again (seen above, pictured by Crystal Bevan) to raise her voice against the kangaroo culling happening in the ACT this winter as it has for a decade.

“It’s interesting that Canberra promotes itself to tourists as the ‘bush capital’ while they hide the real truth from tourists about the killing and culling of kangaroos”, she says, shocked that residents and local ecologists are not more concerned about the culls.

In 2018, the government reported 1,822 Eastern Grey Kangaroos were culled in the ACT with an additional 1,431 at the Googong Foreshores in NSW (parts of which are under ACT control for the water catchment). Frankie Seymour from the Animal Protector’s Alliance says the numbers reported are not easily believed as there are so few kangaroos left in the ACT.

“It is impossible to know how many are actually killed. There is nothing to stop them shooting on government land that isn’t reserve land. They do not have to tell the public about killing on non-reserve land, even though the land and the animals on it are legally public property.”

The ACT government tells the public a shifting story about why the culls are necessary, but basically dog-whistles pest management.

Speaking of how she initially got into activism against kangaroo culling, Jenny recalls that the Australian documentary film Kangaroo: A Love, Hate Story had a lasting impact on her. That film also exposes a massive commercial slaughter in Australia of kangaroos for their skins and for meat.

[The commercial slaughter, called a ‘harvest’ by the government and the kangaroo industry, has been going on since the 1960s, is promoted to benefit graziers, and seems largely unacknowledged by other Australian citizens.]

“After that, I wanted to go back to London and do something. I’ve shown images to people, both comforting but also quite graphic, and most have no idea of the culling that’s happening in Australia.”

While some prospective visitors are choosing to boycott visiting our country completely due to the treatment of kangaroos, Jenny believes that real activism speaks louder.

Why not eco-tourism instead of killing?

“I’ve let the government know that I’ve considered boycotting. When I’ve travelled all this way, I’d like to see the kangaroos in their native habitat and not in a zoo or a wildlife park. The greatest joy I get out of seeing kangaroos is when I can see them run in a field, free.”

In late May Jenny visited the ACT’s Environment, Planning and Sustainable Development Office to deliver a hand-written letter expressing outrage at the slaughter of kangaroos.

“Australia has the world’s largest massacre of land-based wild animals and it’s not talked about. The shooting is not quick and you have joeys getting bashed to death.”

Frankie Seymour reports that for every one female kangaroo killed (which usually make up half the numbers culled) represents three kangaroos, as joeys are not officially counted.

“Pouch joeys (that are bashed to death) are counted as joeys, not kangaroos, and at-foot joeys don’t count either. The killers are supposed to shoot the at-footers when they orphan them but, in our experience, they generally can’t find these mobile babies after their mothers warn them to run, so they just starve. At any time of year a female kangaroo usually has one of each, an at-foot joey born the previous year and a pouch joey born this year.”

Another long-time kangaroo defender in the ACT, Robyn Soxsmith, fears we have reached the tipping point on Canberra kangaroo numbers from which they may never recover.

Jenny says that the Canberra government makes it difficult for wildlife conservation actions like hers to be heard, but that her letter to the ACT government is one small step in her plans to continue speaking out against kangaroo culling.

“I’d really like to do some informal talks and show people some film and pictures about kangaroos and the culling, open the floor for questions and get people talking,” Jenny explains, speaking about her future ideas.

Ultimately, she would like to speak at the United Nation’s Animal Rights Conference in Luxembourg with a friend of hers, exposing the issue to a wider international audience.

For now, Jenny will continue her vigils at the Australian Embassy in London as she believes that educating people and shifting their perceptions will lead to greater change.

Bulletin editor Maria Taylor’s upcoming book about Australia’s colonial and ongoing lethal relationship with its wildlife, highlighted by the present persecution of kangaroos, includes a story from Jenny’s homeland.

VIVA! the British vegan and animal welfare organisation has conducted a decade-long successful campaign to inform and dissuade the British market and the public from selling  and using kangaroo products.

That included convincing celebrity athlete David Beckham he can live without kangaroo leather for his football boots — leading to a successful alternative product being developed. Find out in this linked extract how and why this campaign proceeded, with many internal links that help tell the story.

READ IT HERE:
• VIVA! — successful campaign for kangaroos, here’s how it unfolded 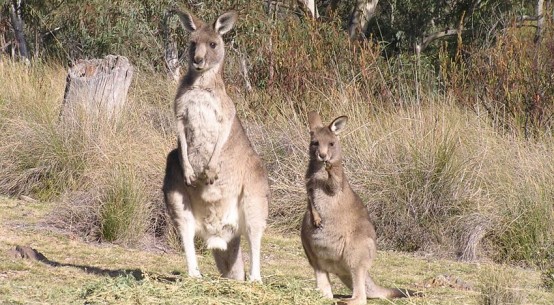