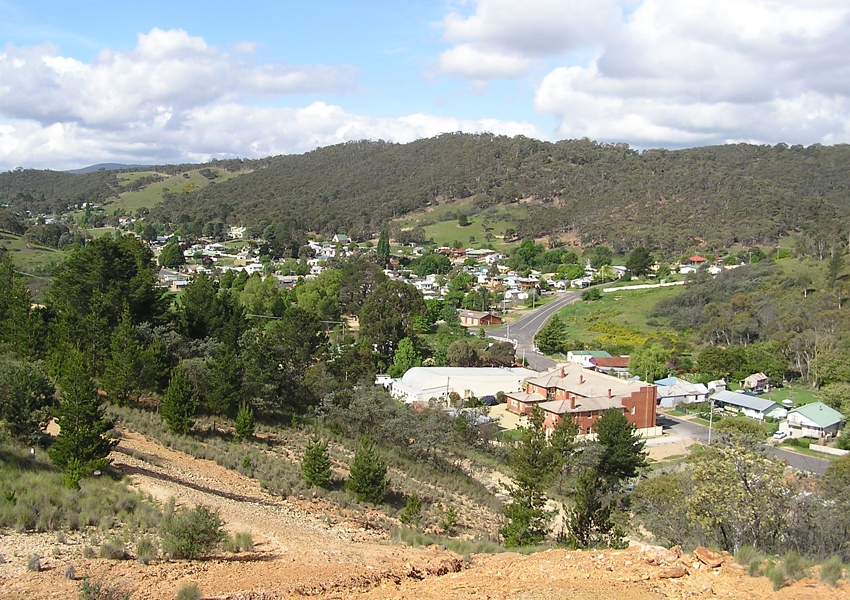 SOMETIME IN 1962, councillor and staunch union leader Tom Kerr posted the following poem in a shop front window on the main street of Captain’s Flat:

The ginney wheels no longer turn,
Up on yonder hill,
The wheels that pulled the miner’s ore
For crushing at the mill.

Now at last the mine has died,
Like many mines before,
So what’s the use of crying now,
for the days of yore.

We’ll have no ghosts like other towns,
For we’re too tough to die,
Happy Christmas to you folks,
From Barb, the kids and I.

The Flat had bravely thrived and survived a number of mining boom and busts over its 100-year history, but by the 1960s the ore ran out and the hoists creaked to a stop. By Christmas of that year most of the town’s families and businesses had gone.

The struggles of the Flat resonate still, and for me it has a lot to do with the destruction of my own community where my family and I lived for over 20 years before the bushfires decided our time was up. Our destruction was violent and terminal, and we were swept away, trading our connection to “place” for a harsh lesson that a community is much more than the sum of its roads and houses.

Captain’s Flat has faced a lot and though it may be a bit faded now, it has not been swept away. Despite many booms and a final devastating bust this tough little community still hangs on.

Throw in recent discoveries of more heavy metals in its topsoil, and the double whammy of a pandemic, and many communities would turn up their toes. Not so Captains Flat; the town remains positive and looks forward to better things. The tenacious existence of such places around Australia is something that warrants our admiration, affection and support.

My first connection with the town was in the early 1980s and came after a long hike up the Molonglo River. I was doing water quality studies in the river, monitoring the presence of invertebrates, and trying to see whether the river was recovering.

It was a stinking hot day, and by the time I had flogged my way up to an abandoned adit [technical term for an old mine shaft] somewhere above Copper Creek I was ready to throw my stupid little sampling net away and chuck the whole thing in. I sat down on the side of a hill and, ignoring the mine waste behind me looked down on the town, was thinking what a pretty and perfectly located little place it was.

There is definitely something special about the Flat. There is the history of course, its vibe — its “Mabo” — for those of you who remember that great Aussie classic The Castle. The history of the town is very well documented and I have included some references below, but there is something else. A forgotten vision perhaps, of what the place could still be. It just makes perfect sense to me that despite its many misfortunes, people still want to come here, raise their kids and plan for the future.

MAIN IMAGE: Captains Flat from Mine Hill. The elongated building in the foreground is the old 400-seat picture theatre which is now the Community Centre. Source: AYArktos, Wikimedia.

For Faye Grunsell, president of the Captains Flat Community Association, it was the peace of the place and the willingness of the locals to accept newcomers that first impressed her. Faye came to the Flat several years ago from Murrumbateman.

“I was going through some troubles in my life at the time and people when I arrived here were just fantastic”, she said. “The bloke next door leaned over the fence when I got out of the car, offered me a beer, and helped me settle in. To me the Flat feels like the real Australia.”

Faye is a bit saddened now to see the little town park taped off after recent studies revealed higher than expected levels of soil toxicity. The pre-school was relocated in June and the EPA has also been advising residents in similar legacy towns around NSW on how to safely “live” with contaminants; exhorting them to wash their hands frequently; don’t drink the tank water (the Flat has town water); and make sure to grow vegetables in raised beds.

Obviously, everybody is hoping for more permanent solutions, especially those who have had to move out while remedial work is being undertaken on their properties.

Work around the mine since the closure has been extensive and almost continuous. It includes protection and upgrading of water quality in the Molonglo, erosion control, capping and revegetation, removal of contaminated materials, sediment control, desilting and dam maintenance, spillway repair and stabilisation.

This is a lot of very expensive work, and although some of it in the early days was not always effective, Captains Flat is now listed on the NSW Legacy Mines Program website as a “case-study” project. There is further work coming up, including sealing of Mine Road above the town to deal with windblown contaminants, replacement of the lower bridge into the town, and more ongoing water testing.

Faye is hoping that the results of further testing will give people more confidence regarding the safety of water in the dams and creeks around the town. “It will be good to get more assurance,” said Faye, “because kids being kids, you can’t stop them swimming in the dams or playing around the creeks.”

Faye remains upbeat about the future and feels confident that the town will survive. “The pub has been sold and the new owner will be talking to the community soon about local expectations and employment opportunities,” she said.

Reopening hospitality, PO, and hopefully a rail trail to come

“The old restaurant across the road has sadly gone now since the owners retired, but the bowling club has been renovated, and after COVID will be open for meals on Thursday, Friday and Saturday nights.”

Faye is also hoping that the Molonglo rail trail project will get the final go-ahead soon because it will bring in more visitors and income. “The post office has also reopened, and it is possible to get a coffee there,” she said.

How it was in the old days

Shane Radburn was brought up in Captains Flat and remembers the town in its heyday. “My dad was a miner, and my mum worked at the Captains Flat Hotel which was really a sight to see in those days when the mines were working full time,” he said. “I would poke my head in the door after school and try and talk to mum but she would be too busy. She would give me a packet of chips and send me out to play.”

Shane remembers playing on the hills above the town with his mates, looking down at the pub when the shift whistle blew. “It was an amazing sight,” he said, “The whistle would blow and the men coming off shift would pour out of the mine and make their way down the hill to the pub. At the same time those inside the pub would come out and head slowly back up the hill. It was like watching an army of marching ants.”

For a short time the Captains Flat Hotel boasted the longest bar in Australia with 32 tap stations along its length. The length of the bar back in 1937 was over 30 metres. It was stretched out in the 1970s and listed in the Guinness Book of Records at 91 metres, then it was shrunk back down to 32 metres in the 1990s to fit in some poker machines. These days, who knows, it might still come close to being the longest bar in the country.

The following cartoon from Smith’s Weekly in 1939 humorously sums up the vibe in the old hotel.

Shane is somewhat laconic about the current dangers of mine waste contamination. It is something he has learned to live with since his young days. “What do you expect?” he said. “It is an old mining town after all.” Despite this, he is positive about the future of the town and says it is growing slowly all the time.

“The best thing about living here now is the peace and quiet. The lifestyle is relaxed and friendly,” he said. “It is a great place to bring up kids and everybody keeps an eye out for each other.”

“Tom Kerr called us the town too tough to die, and he was right,” said Shane. “After the mines closed and most of the town’s buildings were sold up and transported away it took us a long time to recover, but we turned around and clawed our way back.”

Shane explained that there are about 600 people in the town now, 700 if you count the families living in the countryside around. With crazy real estate prices in the surrounding region towns people are now finding the Flat an affordable place to settle down and raise their families.

Visit the Flat when the COVID cloud lifts

When the current restrictions lift around our region and we can safely get out a bit more, I would like to encourage Bulletin readers to have a think about the Flat and add the town to your list of regional destinations. Here are some destinations.

Have a drink in the Captains Flat Hotel when it opens up again; or a meal at the bowling club; chat to the locals, and experience the “Mabo” of a Town too Tough to Die.

(Personally, I will still be wearing a mask and distancing long after we are told these measures won’t be needed, it will be my choice.)

If you are looking for a bright and cheerful gift, drop into Captain’s Treasure, an op shop located in the historic Anglican Church at 21 Montgomery St.

Once restrictions have lifted, they should be open on Wednesdays between 1pm and 4pm, and on Saturdays between 10am and 1pm.

Check them out for homewares, clothes, toys, books, DVDs and plenty more beneath the high wooden beams and stunning stained-glass windows of the little church.

Be sure to check the Captains Treasure’s Facebook page first for updates before you go:  Captain’s Treasure | Facebook

Just down the road from the Captain’s Treasure is the Captains Flat Mens Shed and Russell Dandridge, the manager, is as upbeat as Faye about the town’s future.

“We will be resuming our car boot sales in either October or November, or whenever COVID restrictions lift for us,” he said. “Our café is up and running again with barista style coffee, and we will be offering our famous egg and bacon rolls.”

The Captains Flat Men’s Shed is now located in the old Rural Fire Brigade HQ on the corner of Captains Flat Road and Foxlow Street and after COVID it will be open on Saturday and Sunday between 9am and 2pm.

Drop into the old movie house which is now the home of the Captains Flat Community Association and find out about the heritage trail.

Copies of the following books about the Flat are available at the Community Centre and at the Mens Shed. They are a great read.

Riches Beneath the Flat — A history of the Lake George Mine at Captain’s Flat: Ross Mainwaring. Published by Light Railway Research Society of Australia Inc. Melbourne 2011.

Touring maps of how to get to the Flat and other towns nearby are featured on the Queanbeyan Palerang Treasure Trail.

Many thanks to everybody at the Flat who helped put this article together and supplied photos.

4 thoughts on “Captains Flat — the town too tough to die”