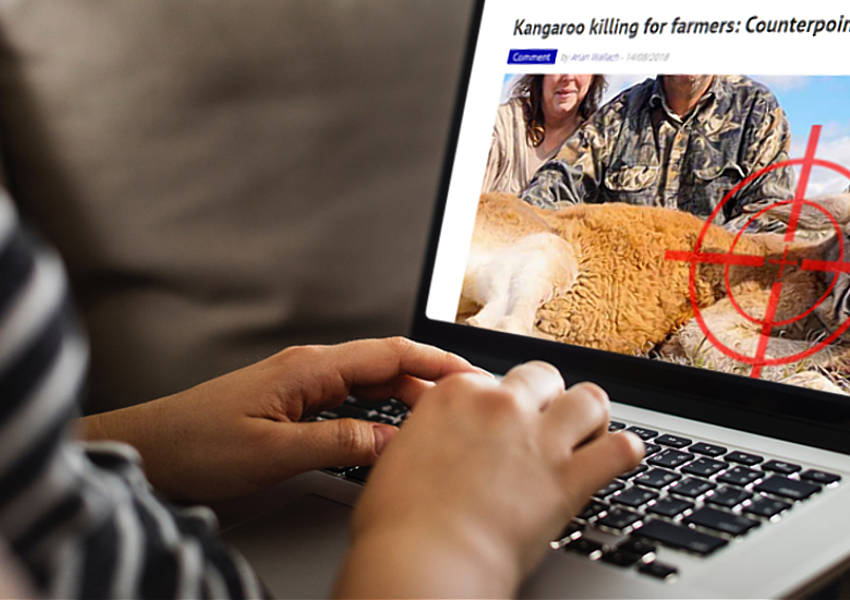 AS AN INDIGENOUS Woman, an Initiated Teacher I’m sickened and appalled at the level of unsustainable farming fuelled by greedy Colonialism engulfing Country.

Farming is a gift not a right and we Indigenous People farmed for thousands of years co-existing with The Dreaming of Country who are Kangaroo. The destruction that unsustainable farming has and is causing is irreversible and the situation here in Western NSW in the open slaughter of Kangaroos who are a Sacred Totem Animal shows a twisted disconnected mindset of complete ignorance and greed — all facilitated by the NSW State Liberal National Party and their cohorts, who also claim that Kangaroos are in plague proportions. Which of course as anyone with ANY basic knowledge re Kangaroos knows is biologically impossible … especially during drought.

I engage with many International Tourists in my business and thankfully here no Kangaroos are shot or “managed”. The Groups I take out on Country can see Kangaroos in their own natural environment; they are constantly voicing their disgust at the bloodlust mentality when it comes to Kangaroos and with an average of about 90% stating they’d never return here to Australia given the destruction of the environment and in regards to the way Wildlife especially Kangaroos are treated. That signifies a massive blow to the tourism industry which contributes more to Australia’s Direct GDP 10.9% (WTTC 2017 Annual Report) than the entire Australian Agribusiness Industry 3% (NFF 2016–17) with Eco Tourism alone generating $1.11B 2014–15.

Australians are the first to condemn other countries for the way they treat and slaughter their wildlife, yet exactly the same is happening here.

As a grower of Bush Tucker I sell at the farmgate, Kangaroos play an essential role in my sustainable food production and indeed have been a part of sustainable farming for thousands of years. Roo Pooh is gold in terms of a natural fertiliser. It’s time people moved out of this blinding Colonial mindset of ignorant greedy persecution of Kangaroos that arrived over 200 years ago; its already done enough irreversible damage.

In closing, Kangaroo are The Dreaming of Country, they once bounded freely across this THEIR Ancestral Home the thuds of their bounds connecting with Country sending out vibrations that heal and regenerate Song Lines and Dreaming Tracks. Now however as a direct result of the relentless slaughter of these Sacred Totem Animals many Song Lines and Dreaming Tracks are now (after millions of years) laying silent, as in many areas of Western NSW the blood of the Sacred is the only thing left staining the decimated landscape, where overstocked mobs of sheep and cattle continue to be bred and fed, Country continues to be decimated via land clearing that itself facilitated drought all for the greed of unsustainable farming, financially propped up by the NSW Govt and taxpayers dollars.

Country needs to heal and it never will whilst this greedy take continues; and be assured, if this destruction of Wildlife and Country doesn’t stop a Natural Breaking Point will come, unlike anything ever seen before.

The destruction caused by greedy take is a very sad distressing state of affairs.

One thought on “Colonial mindset on kangaroos: land and tourism’s loss”