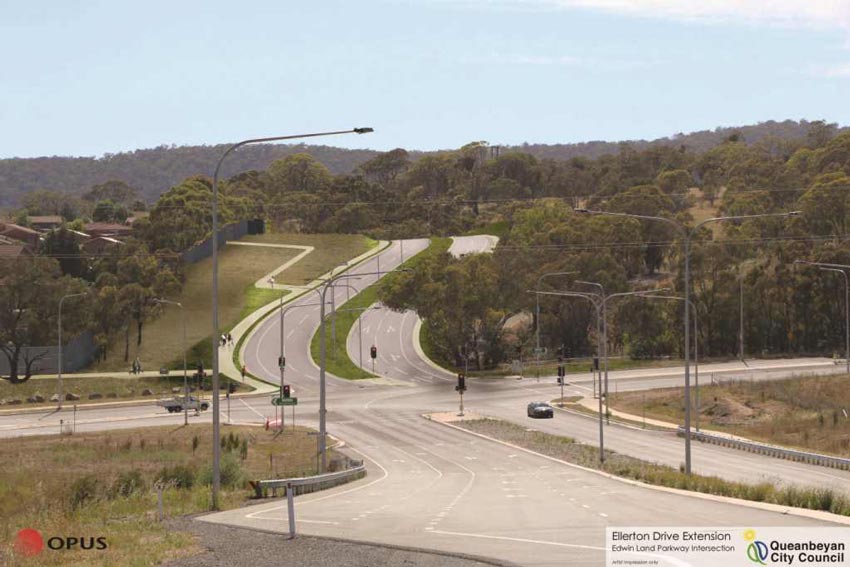 BACKGROUND: The EDE has been controversial and contested by resident groups in Jerrabomberra, Karabar, Greenleigh and Googong since at least 2009 when planning began in earnest.  Issues in affected suburbs are about amenity: car and truck noise and pollution with a new road next to houses. Environmental destruction along the city’s escarpment wildlife corridors and greenspaces is a big issue.  And, plans for further development in the river corridor that will be facilitated by this road are frequently noted.

Over the years, residents and former councillors have contested the assumptions and projections outlined in the council case that follows below: For example former Queanbeyan councillor Kenrick Winchester who is a Googong resident noted:

“The survey I requested QCC conduct of residents south of Edwin Land Parkway clearly showed people who live there much prefer a Dunnes Creek Road (solution) over EDE, and residents of Googong in particular, want the link direct to the Monaro – as we all know, by sending traffic straight to the ACT and them not entering the QBN traffic is surely preferable to what is planned.”

Palerang residents, who will be affected long-term by loan and maintenance costs, were not consulted before a final decision was made as requested by a majority of the soon-to-be-sacked Palerang council.

Preliminary work commenced this week on the Ellerton Drive Extension – the most vital piece of the puzzle to ensure the Queanbeyan road network can handle the growth that will occur in the city over the next 10-15 years.

The Ellerton Drive Extension has been ‘on the maps’ since the 1970s and has been supported in some form by eight successive councils. In recent years, the Extension has been subject to many studies, reviews, modelling and community consultation, with approvals provided by State and Federal Government departments.

Googong, located in the south of Queanbeyan, currently has around 400 occupied houses. In 10-15 years, that will rise to 5,500 – meaning an additional 15,000 residents within the Queanbeyan area. The impact these additional 15,000 residents will have on the Queanbeyan road network is significant and the Ellerton Drive Extension will play a major role in ensuring the new residents, along with our current residents, can travel to their destination without unacceptable delays.

Modelling, undertaken by industry experts, shows that main arterial roads such as Cooma St, Monaro St (Queanbeyan’s main street) and the Queens Bridge would suffer network failure well before Googong reaches its full capacity without the construction of the Ellerton Drive Extension.

The Ellerton Drive Extension will allow traffic travelling from Googong, Jerrabomberra, Karabar and many other areas of Queanbeyan to central and northern Canberra, the coast, Bungendore and Braidwood to bypass the Queanbeyan CBD.

The Extension will also provide an alternate route for trucks travelling to and from the quarry on Old Cooma Rd, in fact it is a requirement of the quarry’s development approval that when the Extension is complete, trucks must use this route.

In 2009, Council developed the Googong and Tralee Traffic Study (2031) which looked at the impact the increased population would have on the road network. The Study looked at many options, including Dunns Creek Rd and a Northern Bypass. Traffic modelling showed that the Ellerton Drive Extension provided the best solution to ease pressure on central Queanbeyan and main arterial roads.

That’s not to say Dunns Creek Rd is not required if further residential development occurs beyond that already planned at Googong and Tralee, however the Ellerton Drive Extension is the priority. Council has identified a preferred route for Dunns Creek Rd and will continue planning, however any construction is not expected until after 2036. Early estimates suggest Dunns Creek Rd would cost well over $200m to construction. The Study also recommended a number of other road improvements, including the duplication of Old Cooma Rd from Googong to Karabar and some intersection improvements around Queanbeyan.

Some will point out that the Ellerton Drive Extension will dump additional traffic on to Yass Rd. The fact is, the traffic that will travel along Yass Rd is going there anyway, the Ellerton Drive Extension will allow it to get there much quicker. Council has been in discussion with the ACT Government to duplicate Pialligo Avenue to handle the increased traffic and planning is already underway to duplicate the first section of Pialligo Ave from the NSW/ACT border towards the Canberra Airport.

The environmental impact of the road has been addressed via the Species Impact Statement and Review of Environmental Factors which were approved by government departments. The road will include rope crossings and underpasses for fauna.

While the exact cost of the EDE will not be known until the tender process for the major construction component  of the work is concluded, the current estimate for the project is about $86m. The NSW and Federal Government have contributed $50m towards the construction. The remaining $36m will be funded via a long-term, low interest loan taken out by Council which will be fully repaid by developer contributions, including interest. This is standard practice by councils across Australia to ensure infrastructure is built well before the road network fails. There will be no increase to rates to fund the construction of this project and maintenance costs will be built into Council’s existing budgets.

Major construction of the project is expected to commence around mid-2017 and will take about two years to complete.