I SHARE THE Bulletin’s concern over the reaction of our newly elected leaders to the vegan protests which committed the grievous crime of holding up traffic, and trespassing on farms and slaughter houses in order to expose the ghastly practices carried on there.

It is very disheartening when the Minister for Agriculture in the federal government threatens what she calls a “hard line” on animal activists, and the Prime Minister who pledges to bring all Australians together dismissing banner-waving protestors as “vegan terrorists”, without considering who they are and the reasons for their actions. 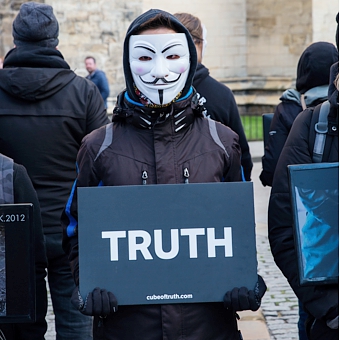 These activists are not terrorists but compassionate humans who care very much about the often barbaric conditions under which they believe farm animals are kept, caged, transported and slaughtered. They are men and women who believe that the means justify the end if their relatively harmless protest gives a voice for the voiceless, and provides incentive for more humane treatment of farm animals.

We need to know the truth about the inhumane practices revealed in the film Dominion so that changes will be made to the way commercially-bred animals are often mistreated and exploited as a result of ignorance, greed and lack of regulations in order to maximise profits and increase production. 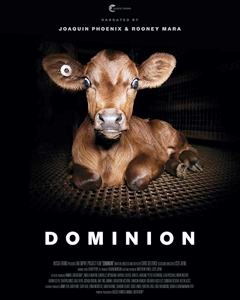 Animal production on industrial scale invisible to most

Science has enabled modern firms to subjugate cows, pigs and chickens to more extreme conditions than those prevailing in earlier times as they aim to increase production and maximise profits, regardless of animal suffering.

This can lead to cruel results such as turkeys stuffed with hormones to make them so fat they lose the use of their legs; cheeping chickens being hurled into mashing machines; cows grieving the loss of their calves almost immediately after they have given birth to them; and pigs being confined to crates.

The Honourable Michael Kirby, a former High Court Judge, and a patron of Voiceless, said in an article on the ABC’s Environmental portal:

“It needs to be acknowledged that farming has changed dramatically over the last 40 years. Industrialised farming practices are largely invisible to Australian consumers and the implications are appalling for the welfare of animals. These emotionally complex beings are packed together in such large numbers that they struggle to find space to move or reach their food. Baby animals are mutilated without pain relief, and many live their lives without seeing the sun or feeling the earth beneath their feet.”

The Victorian Animal Justice Party MP, Andy Merrick has complained to the state’s meat industry regulator of animal cruelties reported to him as a result of undercover footage by activists of sheep having their throats cut without first being stunned. (Is this inhumane treatment illegal? If it is not, shouldn’t it be made so?)

The ACT government is currently considering legislation that would enshrine animal “sentience” in the law, which means for the first time an Australian jurisdiction will consider animals’ feelings as well as their physical well-being in matters of Animal Welfare.

Farmers, slaughter houses and factory farms should not fear public scrutiny if they have nothing to hide.

Why are federal and state governments concerned to implement much harsher laws, not for perpetrators of animal cruelty, but for the activists who oppose it?

The first step to overcoming animal cruelty is to know that it exists, and then do something about it, according to Chris Delforce, the producer of Dominion. He should be pleased to know that in spite of the government’s abrupt dismissal of the protestors’ cause, the film Dominion has been viewed an estimated 55,000 times.

Speaking for the activists Delforce says: “We believe this industry needs to be more transparent so consumers can make informed choices about what they want to support because we think most consumers are opposed to animal cruelty.” 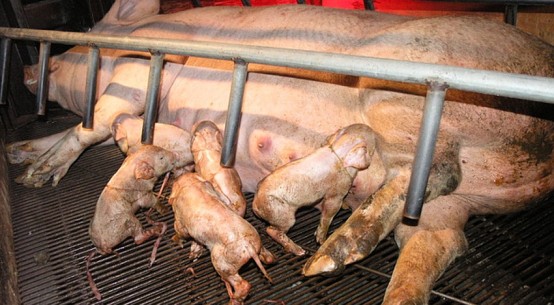