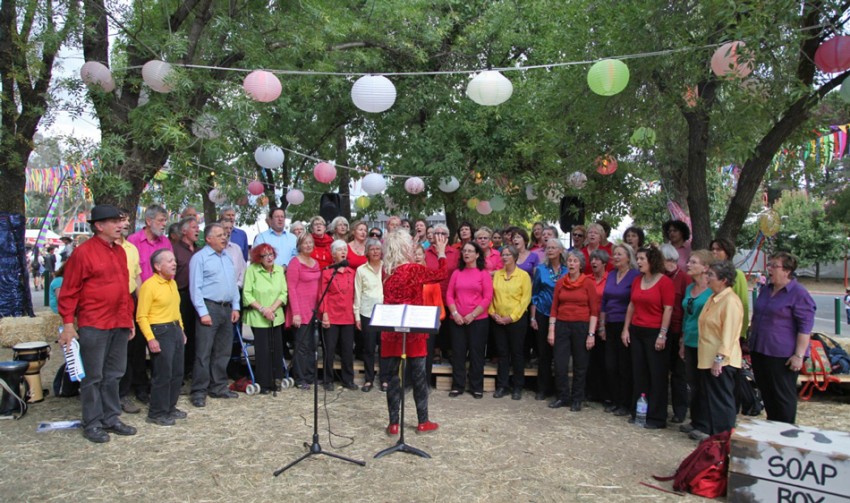 As I settle down to write about communal singing, aka choirs, and the benefits to your health and wellness, what should come on the radio but a spontaneous mass singalong in an opera house somewhere to the strains of  Those were the days my friend, we thought they’d never end… Impulsively, I raised my voice and joined in.

“I get a real buzz out of performance that doesn’t require me to stand out. It provides an opportunity for joy, laughter, challenge and commitment.”

Even though half the population swears they can’t sing and haven’t sung since primary school, in fact everyone can sing, says Moya Simpson, one half of Bungendore’s acclaimed cabaret and satire duo Shortis and Simpson.

Moya, often accompanied by John, has led choirs over the years, particularly a’Capella, world music and folk music variants where people are likely to be singing in a foreign language and need to memorise the words while creating fabulous harmonies.

As we learn from research, memorising music is wonderful therapy for aging brains or for distracted unhappy brains. The singing in group exercise is therapeutic on a number of levels we’ll get to in a minute. Whether it’s a church choir, a popular music choir like Sing Australia, Music for Canberra choirs, or an a’Capella folk music group, there is likely a choir for you. And Canberra’s public service has produced more office choirs than any other city in the country.

One of Moya’s choir members put it this way, “When I sing, it gives me energy and makes me stand tall. I feel as if oxygen is travelling right through my body to my brain. I feel an emotional rush from the sheer beauty of the sound generated by all those eager voice.  I get a real buzz out of performance that doesn’t require me to stand out. It provides an opportunity for joy, laughter, challenge and commitment”.

Said another, “It costs so little to make music. No oil or batteries or computers needed. It’s a doing thing not a talking thing and it’s like gold. I treasure it”.

In fact there is a body of research and networks of practitioners who note the primal cultural origins of group singing in different societies across the world and from ancient times. Ceremonial singing, wedding songs, funeral dirges, lullabies, war chants, they all stem from the same urge to vocalise together in community. Singing and playing music in family or group were still the main source of entertainment not so long ago before the advent of the gramophone and the television.

(Similarly older cultures, including most European cultures, used to think of  dancing as a normal part of life, while now it induces terror in half the population (wonder which half?)

Moya, from Britain, remembers singing happily as a child in a musical family that knew how to harmonise. That all stopped for her in high school when at age 13 she unconsciously sang a harmony in a class singing exercise. The teacher said: ”What do you think you are doing?” and sent her out.

She didn’t sing for 20 years after that, she said, starting again at age 35. “A lot of people tell me similar stories. ‘Can’t sing’, ‘flat’, ‘embarrassed’, but I firmly believe there is a universal voice.”

Research and anecdotal evidence is claiming an amazing range of benefits derived from communal singing – from the enjoyment of being part of a community, to helping overcome a physical condition like asthma or a psychological trauma like post-traumatic stress, anxiety or depression, while building confidence. It’s been called the musical equivalent of yoga or meditation.

Physically, music, whether singing or playing, has been credited with improving breathing, lowering blood pressure, improving cardiac output and relaxing or exercising muscles, like the abdominal muscles. What’s not to like!

British researchers have reported that there is an anatomical response from the ear to the brain that registers pleasure when you sing. A University of Melbourne study detected the release of endorphins, which, as sporting people know, makes people feel happy.

And a study at the University of California reportedly measured a remarkable boost to the immune system in members of a choir. They found the production of Immunogloblin A (IgA) – a vital part of the immune response system – increased markedly during choral singing.

The wellness benefits of choirs are thus many and varied.  One interviewee who was coming out of a depressing life experience told a reporter: “For two hours a week I did not think about the crap in my life. I was completely focused on breathing lyrics and music,” adding, ”we also sounded really good and you can’t help feeling pleased with yourself when you rock the room.”

Residents of Bungendore and nearby communities: Moya Simpson would like to offer a singing workshop for people who would love to sing. If you haven’t sung for years, or you’ve always wanted to, come and discover the joy of making noise in a group of people. Who knows? It could even lead to a Bungendore choir!