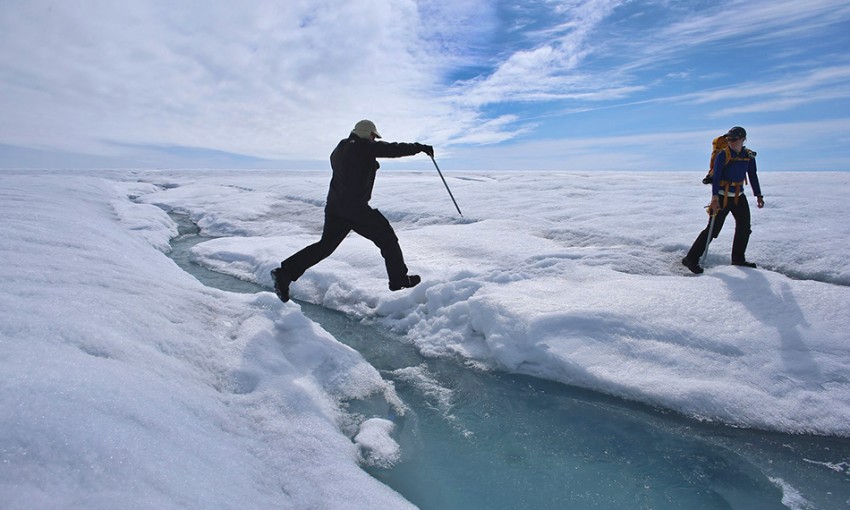 A scientist leaps over water during a trip to the Greenland ice sheet, which saw melting over more than 50% of its surface last year. Photograph: Joe Raedle/Getty Images

By oliver Millman, The Guardian

The world is careening towards an environment never experienced before by humans, with the temperature of the air and oceans breaking records, sea levels reaching historic highs and carbon dioxide surpassing a key milestone, a major international report has found.

The “state of the climate” report, led by the National Oceanic and Atmospheric Administration (Noaa) with input from hundreds of scientists from 62 countries, confirmed there was a “toppling of several symbolic mileposts” in heat, sea level rise and extreme weather in 2015.

“The impacts of climate change are no longer subtle,” Michael Mann, a leading climatologist at Penn State, told the Guardian. “They are playing out before us, in real time. The 2015 numbers drive that home.” 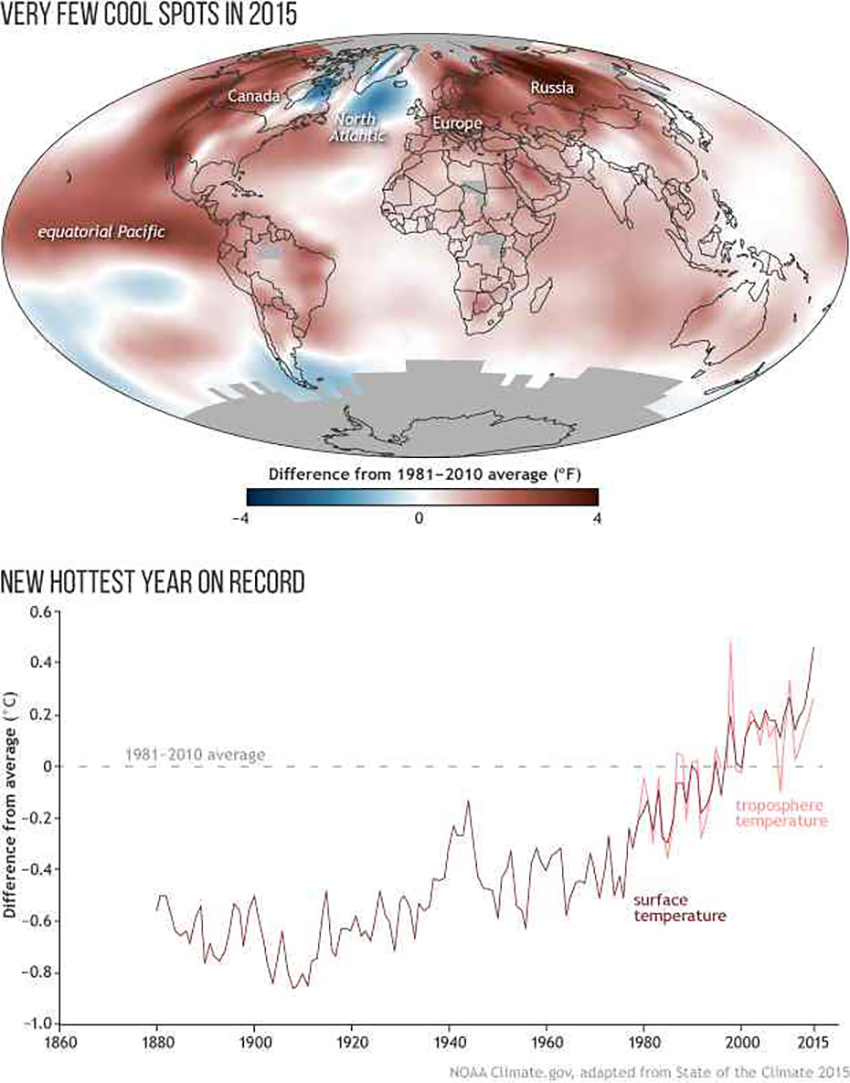 Last year was the warmest on record, with the annual surface temperature beating the previous mark set in 2014 by 0.1C. This means that the world is now 1C warmer than it was in pre-industrial times, largely due to a huge escalation in the production of greenhouse gases. The UN has already said that 2016 is highly likely to break the annual record again, after 14 straight months of extreme heat aided by a hefty El Niño climatic event, a weather event that typically raises temperatures around the world.

The oceans, which absorb more than 90% of the extra CO2 pumped into the atmosphere, also reached a new record temperature, with sharp spikes in the El Niño-dominated eastern Pacific, which was 2C warmer than the long-term average, and the Arctic, where the temperature in August hit a dizzying 8C above average. 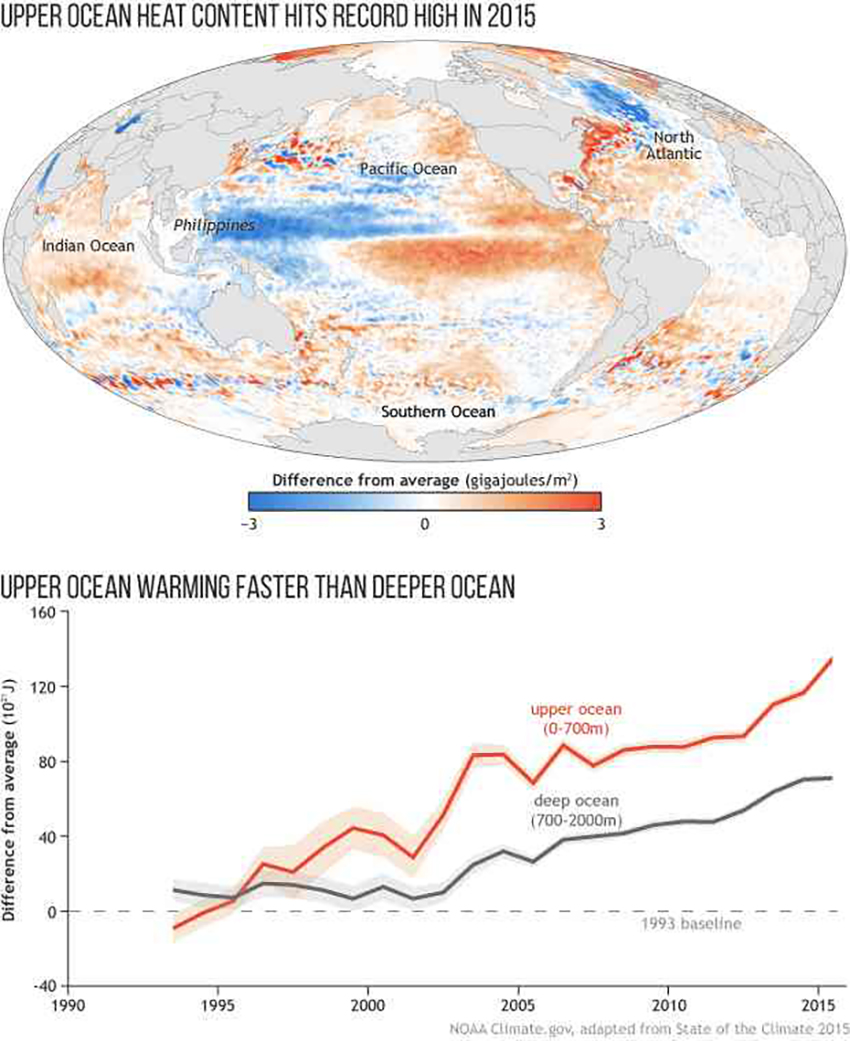 The thermal expansion of the oceans, compounded by melting glaciers, resulted in the highest global sea level on record in 2015. The oceans are around 70mm higher than the 1993 average, which is when comprehensive satellite measurements of sea levels began. The seas are rising at an average rate of 3.3mm a year, with the western Pacific and Indian Oceans experiencing the fastest increases.

These changes are being driven by a CO2 concentration that surpassed the symbolic 400 parts per million mark at the Mauna Loa research station in Hawaii last year. The Noaa report states that the global CO2 level was a touch under this, at 399.4ppm, an increase of 2.2ppm compared to 2014. 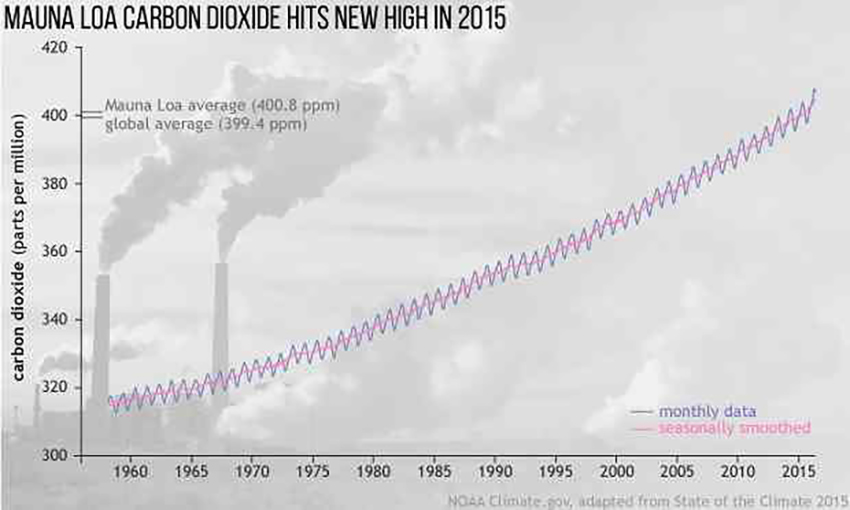 Noaa said other “remarkable” changes in 2015 include the Arctic’s lowest maximum sea ice extent in the 37-year satellite record, recorded in February 2015. The world’s alpine glaciers recorded a net annual loss of ice for the 36th consecutive year and the Greenland ice sheet, which would balloon sea levels by around 7m should it disintegrate, experienced melting over more than 50% of its surface.

The rapid changes in the climate may have profound consequences for humans and other species. In June last year, a severe heatwave claimed over 1,000 lives in Karachi, Pakistan. Severe drought caused food shortages for millions of people in Ethiopia, with a lack of rainfall resulting in “intense and widespread” forest fires in Indonesia that belched out a vast quantity of greenhouse gas.

Diminishing sea ice is causing major walrus herds to haul themselves out on to land. Arctic marine species, such as snailfish and polar cod, are being pushed out of the region by species coming from further south, attracted to the warming waters. A huge algal bloom off the west coast of North America harmed marine life and fisheries. 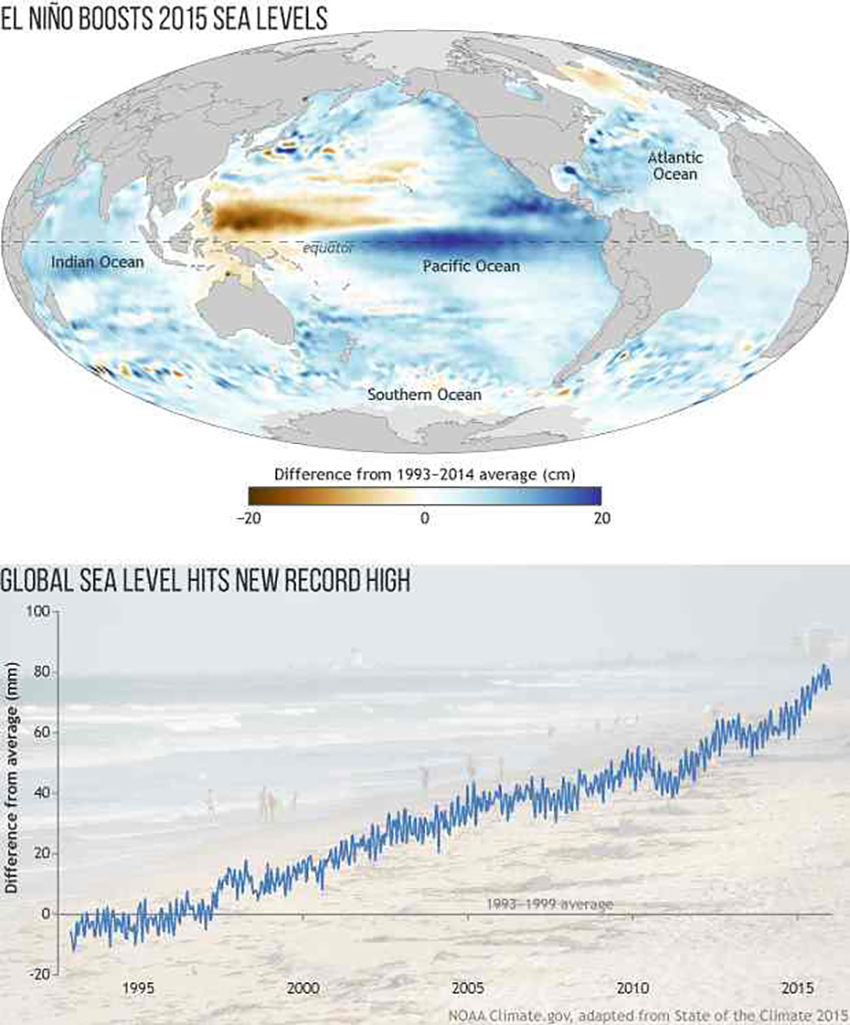 Scientists have said there were underlying climate change trends at play but last year was also influenced by the strong El Niño event, which is when equatorial Pacific waters warm, leading to an array of weather effects around the world. El Niño has also helped spur searing heat in 2016 but has now petered out.

Thomas Karl, director of Noaa national centers for environmental information, said that last year’s climate “was shaped both by long-term change and an El Niño event. When we think about being climate resilient, both of these time scales are important to consider.

“Last year’s El Niño was a clear reminder of how short-term events can amplify the relative influence and impacts stemming from longer-term warming trends.”

Kate Willett, a senior scientist at Britain’s Met Office, said that there was a 75% annual increase in the amount of land that experienced severe drought last year.

“Looking at a range of climate measurements, 2015 was yet another highly significant year,” she said. “Not only was 2015 the warmest year on record by a large margin, it was also another year when the levels of dominant greenhouse gases reached new peaks.”

The state of the climate report is now in its 26th year. The peer-reviewed series is published annually by the American Meteorological Society.