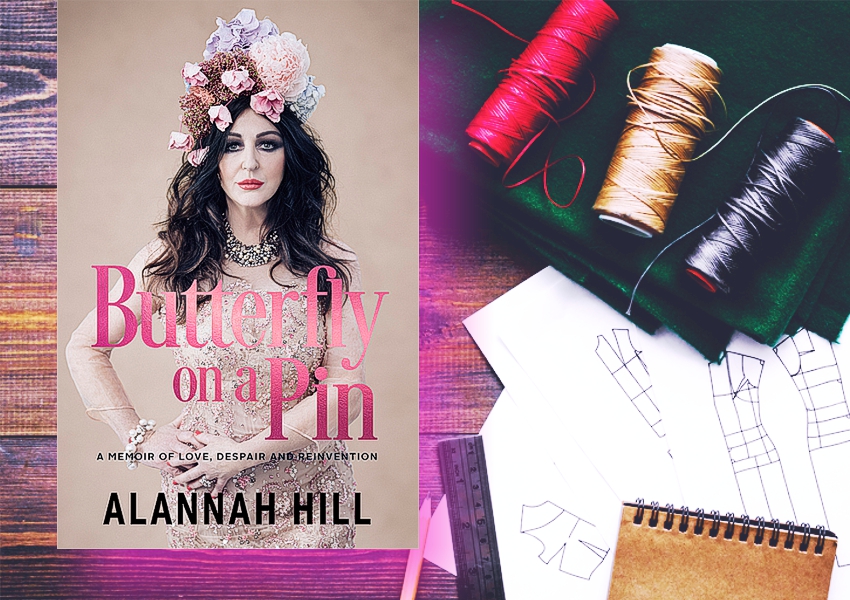 “People whispered into my chandelier hairdo that my story could give a voice to other unjoined, abused girls lost in the dark shadow of life. It was time, dear reader, for me to write my truth.”

BUTTERFLY ON A PIN  was published in May 2018 and is Australian fashion designer Alannah Hill’s riveting tell-all memoir about rising from a rural upbringing in Tasmania to creating one of our country’s iconic fashion brands. Most prevalent and emotional in her memoir is Hill’s recount of the abuse and violence she experienced within her own family as a child.

She writes about being 15 when her own brother molested her. “The thought of Joseph’s hands doing anything good left me in a state of total darkness. To tell somebody what had happened meant that I would have to remember it all over again; giving a voice to what he did would make it too real, and my feelings of helplessness around him made me feel angry and abnormal”.

Hill also experienced domestic violence within her parental home, writing about her mother and father’s abusive, alcohol-fueled relationship. “The taxi driver would speed up as we neared the milk bar, Dad drunkenly squinting ahead to see if Mum was standing at the back door wielding a poker. He’d forget where he was for a moment when he fell onto the lino floor, Mum standing over him like a demon, waving the poker around. She once hit Dad so hard that blood spurted out into a sack of rotten potatoes, casting them with a rather spectacular red glow”.

Hill’s traumatic past forced her to rely on the idea of re-inventing herself from a young age. After being sexually abused by her brother (who was also the subject of parental neglect and violence, as were all the children), she “went looking for a new family that I thought might understand me: a family I’d spied scavenging from the Penguin tip”.

The traumatic past that Hill experienced made it a challenge for her to accept the good fortune in her adult life. She writes in her memoir that, “I understand I bring the spirit from my past with me like a floating contagion”.

For many years Alannah Hill was on the up and up, having made a name for herself outside of rural Tasmania. From humble beginnings at the family milk bar in Penguin, to having her own apartment in Melbourne and being the go-to boutique for the Spring horse-racing season.

Alannah Hill started her brand in the small Indigo Boutique in Melbourne, eventually backed by strong investor, Factory X, and opening a number of her own boutiques across Australia. To fans of her designs and her employees, or ‘Alannah-ettes’, it’s surprising that a stylish, well-known designer could be haunted by such an unfortunate past.

Hill’s involvement in her brand ended when in 2013 it was announced that she would have no input into the designs and boutiques that bore her name. This was after Hill was a single mother with a son of her own, and when she realized that she and her company were going in two different directions, writing that she “felt pushed aside at work, disrespected and marginalized”.

Accepting the past in tale of redemption

In coming to terms with her past, Hill reached a turning point in accepting the mistakes she felt were made by her mother when he mother confessed that “she had known Joseph had molested me on that train years before”. When Hill’s mother died a few years after her confession, Hill was devastated that “a critical link to the past had been broken, along with the hope that she and I might achieve a real understanding, reconciliation or mutual redemption.”

When Hill was invited to read a letter at a Women of Letters conference in 2015 that she understood she had her own story to tell about accepting one’s past and re-inventing yourself.

Alannah Hill tells her life story with its myriad of ups and downs in a way that will keep you turning the pages. Infused with sorrow as well as uplifting messages and Hill’s unique brand of humour, Butterfly on a Pin is an emotionally wrenching ‘behind-the-façade’ glance at a famous face in the Australian fashion industry. Alannah Hill has written a touching and provocative story of her own life and career – the humble Tasmanian girl who made it, and persevered.