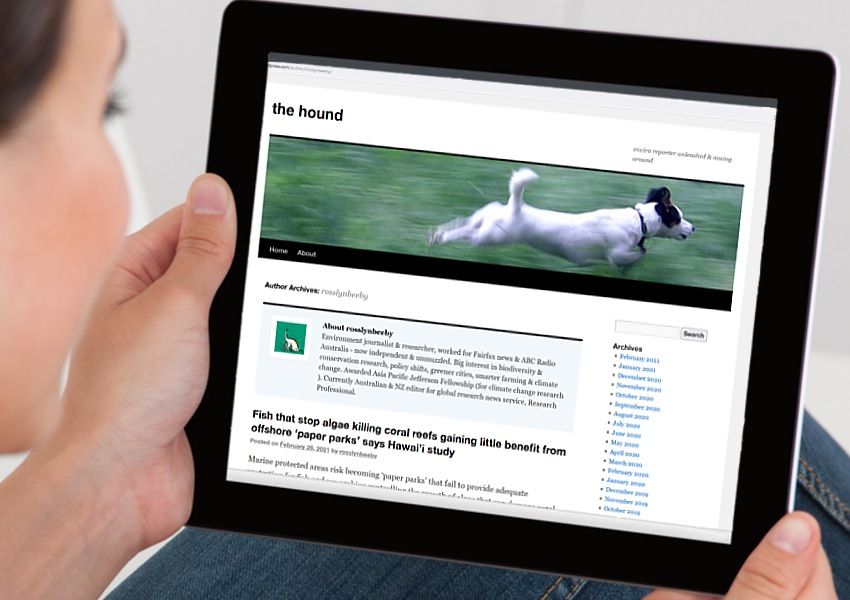 FORMER CANBERRA TIMES Science and Conservation journalist, Rosslyn Beeby died earlier this year at the age of 68. She was described by her friend and former colleague, Helen Musa, as having become “increasingly reclusive” since her retirement.

I first met Rosslyn Beeby after she interviewed me regarding a government consultancy report compiled by the organisation of which I was then director. The topic was sustainability in the ACT.

One of the conclusions we had drawn, in a report that covered the full range of environment and sustainability issues in the territory, was that the ACT’s annual kangaroo cull was neither effective nor necessary. This was what grabbed Rosslyn’s attention and her report on our findings made the front page of the Canberra Times the next day, drawing immediate fire from the Sustainability Commissioner and the Environment Minister — both of whom went public in favour of the cull and dismissed our report as biased and unbalanced.

When I contacted Rosslyn to tell her that her report had put me under a lot of pressure from the government’s hierarchy she was unapologetic, but she did offer to buy me a coffee.

A colleague who was a former ABC journalist warned me before I met Rosslyn that she was an “old environmental warhorse”, a description that I don’t think Rosslyn would have minded at all. She was not only passionate about the environment, she was well-informed and an excellent writer: a combination that made her a formidable figure in the Canberra Times newsroom and which, ultimately, led to her departure from the paper.

“No more wildlife stories,” was the edict from CT management, she told me after she’d abruptly left the paper. Rosslyn knew, had interviewed and was on good terms with some of the most respected environmental researchers in the country. Her stories were always factually sound and impeccably researched, and this, apparently, was drawing criticism of the paper from its major advertiser: the ACT government.

As a freelancer, however, Rosslyn was free to research and publish her own work, and this she did via her blog, The Hound, which is still available online at https://thehound2.wordpress.com/author/rosslynbeeby/  and holds many informative environmental stories.

Originally from Melbourne, Rosslyn moved to Queanbeyan from the Blue Mountains where she’d worked at Radio Australia and been on the media staff of the World Wildlife Fund. She used to joke that when she took the job at the Canberra Times and not knowing Canberra at all, she asked a friend where in Canberra she should look for a house. Her friend asked her where in Melbourne she’d come from. “Footscray,” she said. “Aah,” replied her friend, “then Queanbeyan’s the place for you.” She lived with her two cats in a house near the river in Queanbeyan, which is where she died suddenly some time over Easter this year.

Rosslyn Beeby’s experience as an activist as well as her knowledge and incisive writing is a big loss to the environment movement and the craft of journalism.

RELATED: Bulletin story (Kangaroos and biodoversity, District Bulletin) on Robin Tennant-Wood’s ordeal with the ACT government in the wake of the Beeby story in the Canberra Times, original headline ‘Burn the heretic’.