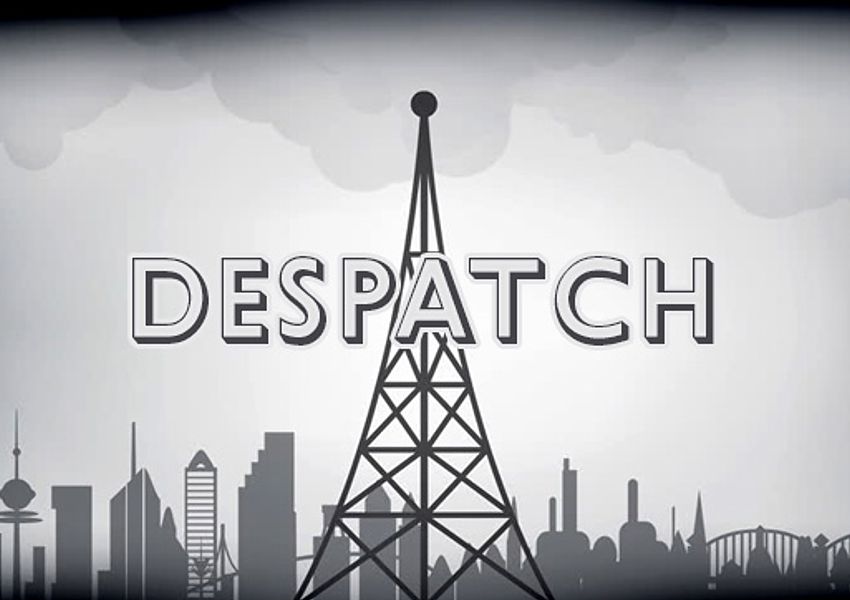 AS NINE NETWORK was hosting a $10,000 a head fundraiser for the Liberal Party at its headquarters last night, Nine and News Corp newspapers were putting the finishing touches on their upbeat coverage of the Government’s impending economic news.

Despite the incontrovertible evidence that the Coalition has doubled the country’s debt and has been presiding over an economy in a tailspin, the media spin is all about aberration. The June GDP figures are out tomorrow and they are furiously hosing down the prospect of negative press.

“Ignore what will be a poor growth number for the June quarter and focus on September, Treasurer Josh Frydenberg urges,” headlined the coverage in today’s Australian Financial Review. Although the numbers are supposed to be a secret until tomorrow, the AFR was faithfully predicting what will happen in another three months’ time: “Economy will pick up after “soft” June quarter”. 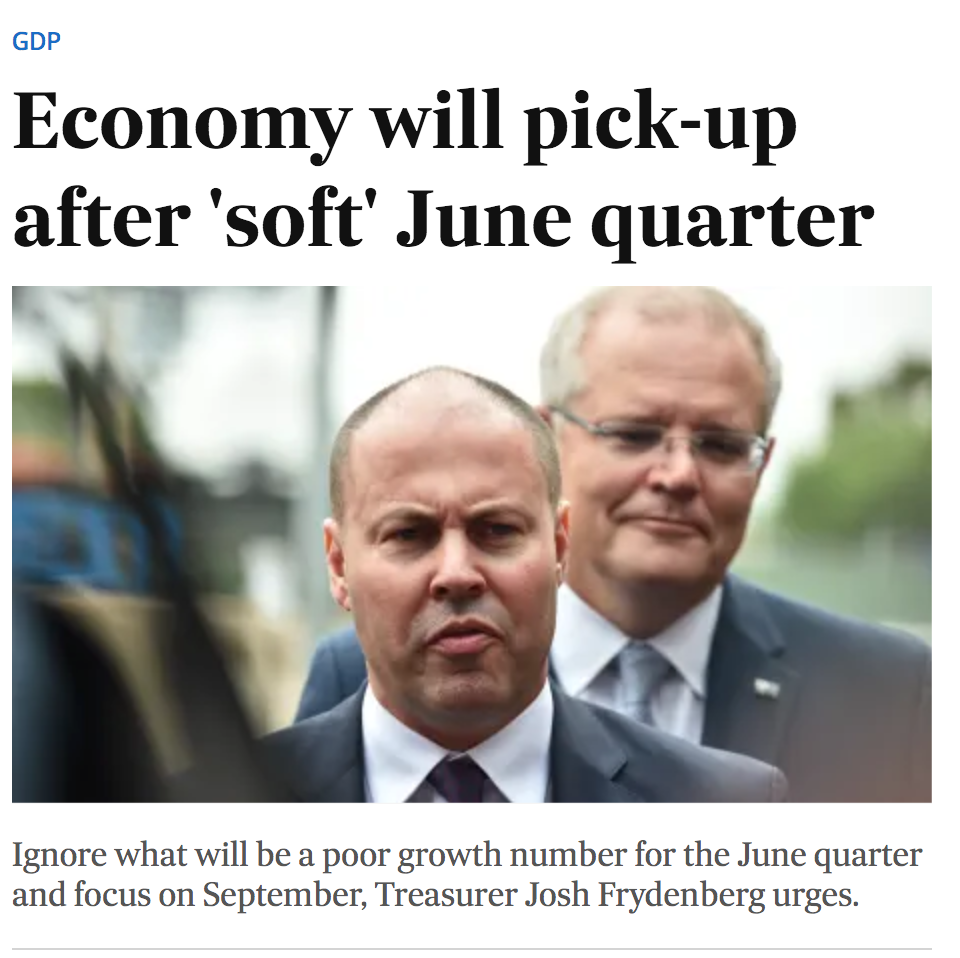 Soft is soft. Not only is the Nine media organisation publishing the government’s press releases a day early but it raised a reported $800,000 for Scott Morrison and the Liberal Party last night.

For it’s part, “The Government Gazette”, more commonly referred to as The Australian newspaper, didn’t even have the disastrous economic news on its Home Page. Rather, there was an upbeat yarn about the rebound in property prices.

There it was, the property news, right next to the apologetic coverage of the deportation of the Tamil family — and just above the inevitable stories about ABC political correctness, a Queensland Labor lobbying scandal and an indignant tale about the guy from Atlassian supporting his workers striking for climate — “Rebound is On — House Prices Rise Across Board”. 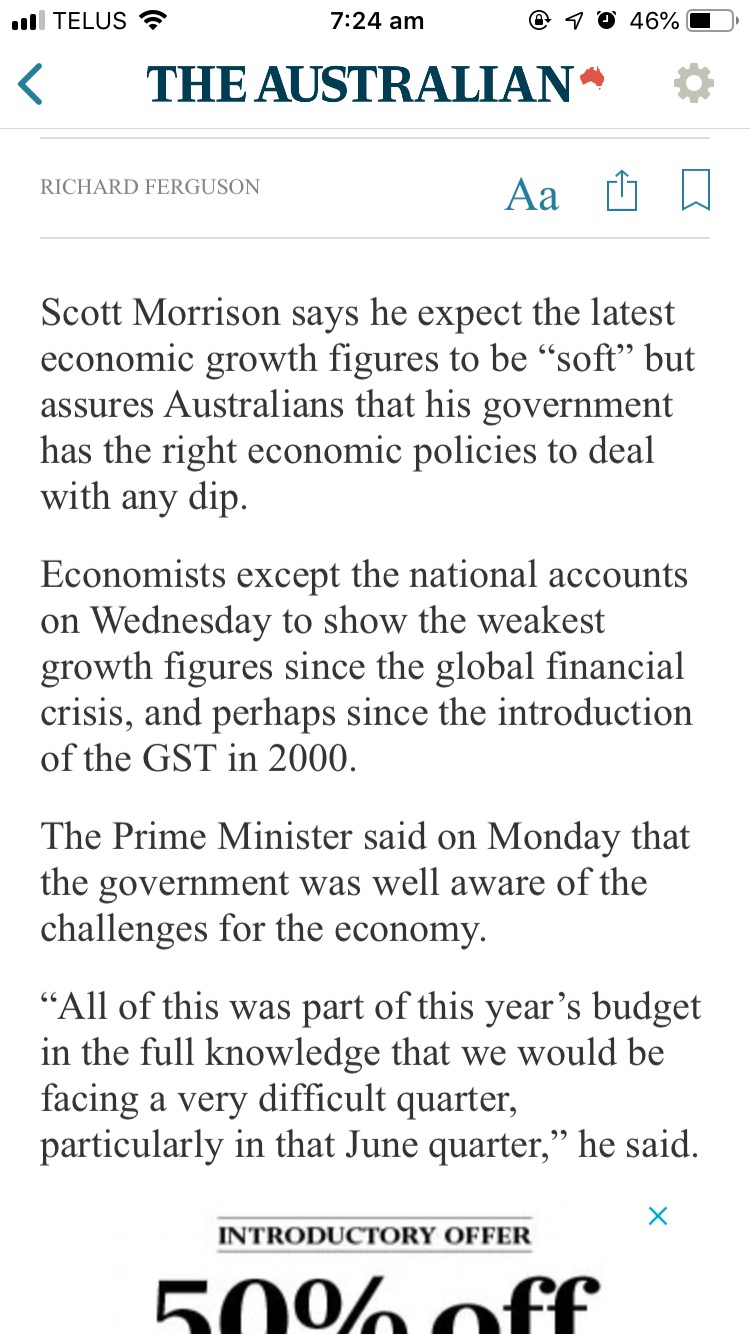 Lest there were any doubt the Government’s PR machine had worded up the Fourth Estate for some affectionate words about how the economy wasn’t in such bad shape, there it was, buried on the inside pages, the June quarter would be “soft” but there was nothing to worry about because the Government had just the right policies.

At least the Sydney Morning Herald had the decency to point out, “The economy on brink of worst slump in 20 years”.  Though it did hose it all down with a nice lead paragraph saying Prime Minister Scott Morrison was cautioning against a “knee-jerk reaction”.

Thank heavens for that; because it must have been about the same time that Scott – along with Trade Minister Birmo, Communications Minister Paul Fletcher, Education Minister Dan Tehan, Government Services Minister Stuart Robert and Assistant Financial Services Minister Jane Hume — were noshing it up with Hugh Marks and the Nine Entertainment crew (thanks for the Fairfax merger BTW), that the SMH and AFR editors were filing their stories. 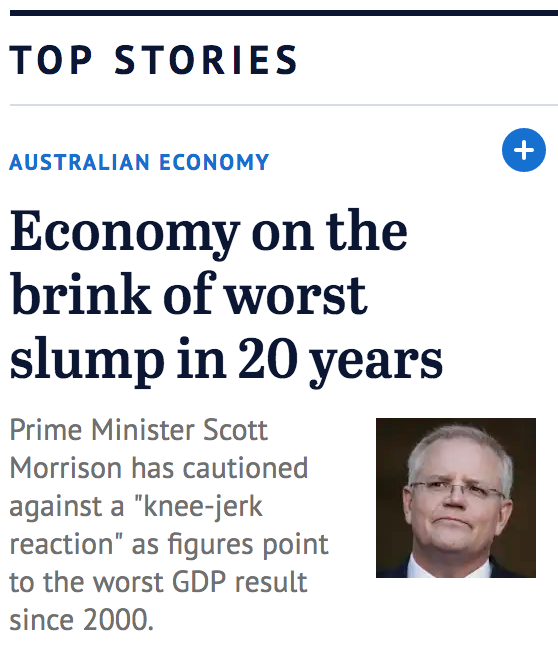 This economic stuff is just fun and games compared with The Australian’s front page the day before though. As outrage mounted over the treatment of the Sri Lankan family taken from their Queensland home and deported to Christmas Island, there was a massive photo of an asylum-seekers’ boat heading for Australia … packed with Sri Lankans apparently.

No matter that we are told so often that “on-water” operational issues are a secret, somehow a smacking big picture of the dreaded boat people turns up on the front page of the Oz — the quintessential scare campaign designed to whip up xenophobia and support for the Government.

The public’s confidence in government is so low these days, there will be plenty of people who could be forgiven for thinking it might even be a fake.

After all, the government’s narrative of “superior economic management” is a fake which has been propounded for decades. Here’s the proof: