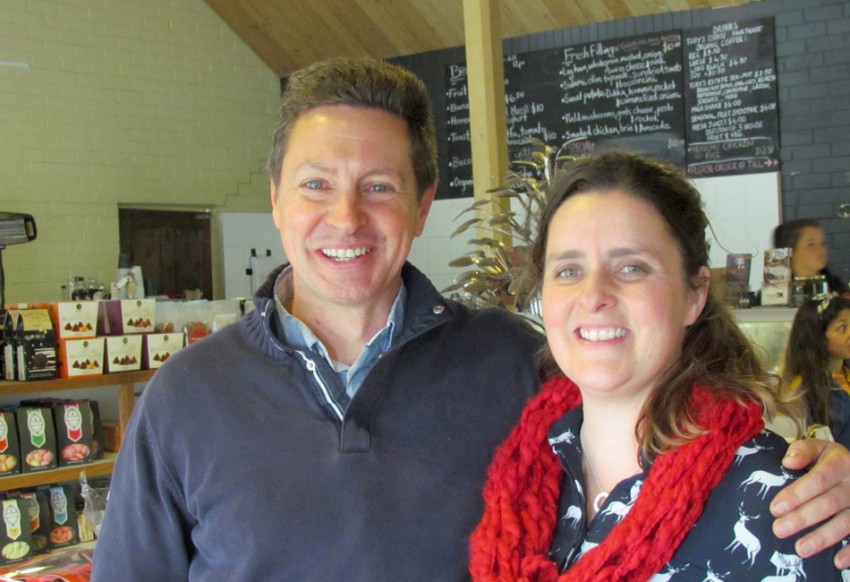 In a  series of regional interviews, Christine M Knight this month talks to Emma and Tony Booth of Food Lovers, Bungendore. The food store and cafe won the 2015 Service Excellence Award from Bungendore Chamber of Commerce.

While the day of the interview had been chillingly cold and the winds biting, I found Food Lovers to be warm in atmosphere and rich in camaraderie. I observed timely service given to customers in the store and a diverse group of patrons enjoying light-hearted conversation over coffee and cake.

The few children present enjoyed ice-cream in waffle cones. I was tempted to try the gluten and dairy free sorbet. The raspberry sorbet is delicious.

Emma Booth nee O’Brien was born and grew up in Yass, studied at the Australian Catholic University, Signadou campus. She became a primary school teacher.

Tony Booth was born in Singapore while his father served during the Vietnam War. Later, in New Zealand, Tony worked in advertising and media. Tony met Emma on a blind date when she was teaching in New Zealand. Later, they moved to Sydney.

For a long time, the Booths enjoyed the many benefits of living in inner Sydney with their occupations. However, they found that demands on them increased exponentially with the birth of their sons, Jackson and Hamish, and the upward movement of their careers.

Many readers will know all too well the way time evaporates and pressure mounts as parents attempt to dovetail family, career, and life’s demands. As their children grew, Emma and Tony decided to re-evaluate their life and made changes to it to ensure they lived their values and followed through to make what was important to them a living experience.

Their path back to country life in this region was more a winding route than a straight line. Ultimately, that route led them to buy Food Lovers, an existing business in Bungendore, about three years ago and to recently purchase a property at Mt Fairy.

Tree change, what they considered

As I have little commercial business experience, I was interested in the factors that needed to be considered when making such a change. Emma explained that before buying the business, they carefully analysed both the advantages and disadvantages, including the business’ history to determine the likelihood of its ongoing financial success.

While there was considerable goodwill associated with the business, the Booths were careful not to overestimate it in their deliberations. This was especially important given advice to them at the time of their purchase that a new and significantly larger supermarket was proposed for Bungendore.

Emma opted to manage the accounts and purchases associated with the deli and grocery lines while Tony took over sourcing and purchasing quality fresh produce, including some organic lines, and grass-fed cattle products for the store. “Grass fed beef is renowned for its excellent texture and flavour.” Tony sources products from local suppliers whenever possible.

Emma stressed that their apples are gas and wax free. “Cold storage gas-free fruit remains fresher longer. Sprays can be washed off wax-free fruit but not off wax-covered fruit.”

For fresh fruit sourced locally, research shows that buyers report the taste seems sweeter, the crunch crisper, and that juices explode in the mouth rather than being muted.

In taking over the business, Emma and Tony decided that it would be more profitable for them to provide non-supermarket lines that complement rather than compete with the local IGA.

The Booths also decided to provide for people with special dietary needs, gourmet lines such as local truffles, and trees and other plants associated with food lines. Their eggs are from authentic, free-range local suppliers. They also expanded their café and added Toby’s Estate Coffee to their barista service.

Food Lovers supports the Bungendore Community Foundation and other local groups by hosting fund raising events. It recently hosted a benefit night for People in Need over Winter.