Skip to content
You are here
Home > Recent News > Getting the trucks off Monaro St – What is wrong with the northern bypass? 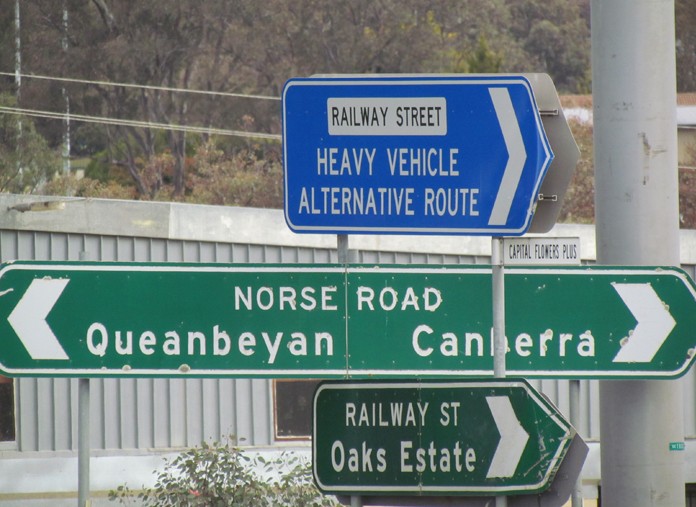 For many central Queanbeyan residents slowing traffic on Monaro Street and getting the trucks off, plus pedestrian friendly improvements, are the big issues for desiring a ‘bypass’ – not getting Googong commuters to Canberra via the Yass Road which has become the defacto reason for building the Ellerton Drive extension (EDE).

The RTA (now Roads and Maritime Services, RMS) has been blamed for Queanbeyan’s inability to calm Monaro Street traffic or put load limits on the bridge. But what about the existing heavy vehicle bypass to the north (from Canberra Avenue to the Yass road passing by Oaks Estate?) It gets short shrift in recent discussions about traffic planning.

Here is a bit of history about the northern heavy vehicle route. It was researched by Greenleigh residents Peter Kontis and Claire Cooper, who are admittedly concerned about the EDE as it would pass near their homes and those of many others in Queanbeyan.

The existing Queanbeyan heavy vehicle bypass (the northern bypass) was constructed in 2006. The $6.5 million bypass was funded by the NSW Government ($4.5 million) and the Australian Government ($2 million). All intersection and road upgrades were completed by April 2006.

Combining an upgraded northern bypass with a maximum load limit on Queens Bridge would very effectively (and more cheaply) divert most heavy vehicles out of the CBD and through industrial areas on the outskirts of Queanbeyan. A full comparative analysis of financial costs of each option is needed.

Prior to its construction, the then Deputy Prime Minister and Federal Minister for Transport and Regional Services, the Hon John Anderson MP, said ”the Queanbeyan heavy vehicle bypass will divert up to 45% of the heavy vehicles that use Monaro Street, Queanbeyan’s main street.”

If the current ‘heavy vehicle bypass’ is not working effectively, the RMS should encourage increased usage by further promoting it to the trucking industry, and working collaboratively with trucking groups to improve its alignment.

We note that the draft traffic study ruled out the northern bypass very early in its deliberations stating “options that included the northern bypass were not proceeded with. The Roads and Traffic Authority (RTA) advised that alignment issues made the bypass too expensive at this time’’ (p2).

We are aware that some years ago (mid 1990s), QCC contracted consultants to advise on a range of possible by-pass options and the outcome was that the northern bypass was considered far cheaper than the EDE/ELP by-pass option. However, no comparative analysis of financial costs for each road option were undertaken or included in this most recent traffic study.

The northern bypass would arguably be considerably cheaper than building a new ineffective bypass that has the additional failing of ruining the amenities of many Queanbeyan residents.

One thought on “Getting the trucks off Monaro St – What is wrong with the northern bypass?”