Skip to content
You are here
Home > Living Today > Health > Going to the beach this Christmas? 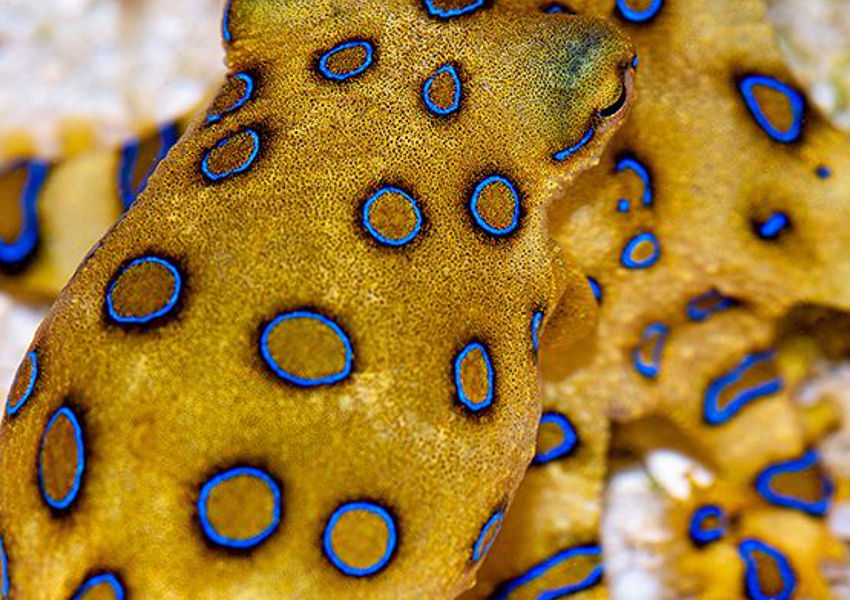 A blue-ringed octopus bite is rare but potentially deadly. Here’s what you need to know.

AARON HODGSON was collecting shells on a beach just south of Newcastle with his two young daughters when something unforgettable happened.

He was holding a bunch of shells in his hand when he felt a slight sucking sensation on his finger, which made him flick the shells back into the water.

And that’s when he saw it — a tiny blue-ringed octopus, which had been hiding in the shells and had just given him a bite.

ABOVE: Meet the greater blue-ringed octopus (Hapalochlaena lunulata) — while a bite from this stunning creature can land you in hospital, it’s easy to avoid. (Supplied: Lawrence Scheele)

Five minutes later, Aaron was hit by nausea and stomach cramps, and it felt like his chest was being flushed with cold water on the inside.

Then his vision went blurry, his heart started pumping hard, he felt faint and he thought he was going to die.

Aaron couldn’t move or talk, not even to comfort his distressed children, and just had to focus on surviving.

He ended up in hospital for the rest of the day and it took the best part of a week for him to fully recover from the bite.

Months later he’s having to see a psychologist as a result of the event.

“I’ve been having nightmares about it since,” Aaron says. “I’ve got like PTSD with a big octopus crawling on my face suffocating me in the night. It’s pretty weird.”

And his three-year-old daughter has been particularly affected.

“Any time I close my eyes and I’m not in bed, she tries to come over and wake me up because that’s how I was on the beach.

“She gets really worried when I go in the water,” says Aaron who is a keen surfer.

But it could have been a lot worse.