Skip to content
You are here
Home > Environment > Habitat, not demonisation, is the answer to species loss

Hold the front page! Stop the press! This week the government made an announcement on a grave matter affecting our nation’s future. This was an emergency requiring 10 flags, a minister and the prime minister. The nation has declared war on … cats.

Admittedly, this being one of the very few environmental announcements coming out of the current government and certainly one of the first times most of us have actually heard Environment Minister Greg Hunt speak, it did raise more than a ripple, but really? Cats?

Let’s put this into perspective. Cynicism aside, we all know that feral cats pose a significant threat to small wildlife species. Researchers have dated the existence of cats in Australia to around the same time as the arrival of European setters by looking at species of wildlife that were abundant up to that time but where populations declined or disappeared shortly thereafter.

Of course, the fact that the decline in many species of wildlife coincides with the spread of everything else the first Europeans brought with them, such as other species of animals, exotic diseases and a land management and farming system that required large scale clearing of native habitat, is conveniently ignored by this research.

Also ignored is the fact that as well as eating native wildlife and birds, cats also eat rabbits, baby foxes, pest species of birds such as Indian mynors and starlings, non-native rats and other vermin.

It is estimated that there are up to 75 million feral cats across Australia, happily munching their way through our wildlife population and Minister Hunt wants to kill 20 million of them by 2020. But what else is Mr Hunt doing?

Interestingly, all the research on cats is coming from scientific bodies that typically research very specific topics. The environment groups and peak bodies, while they acknowledge the damage done by feral animals, point to a far more wide-ranging and long term threat to wildlife: the loss of habitat.

The same government that has declared war on a single species of feral animal is not only failing to protect habitat, but is proactive in approving its destruction. Analysis commissioned by the Australian Conservation Foundation, Birdlife Australia and Environmental Justice Australia has concluded that habitat loss is driving the imminent extinction of up to 70% of the most at-risk species of Australian wildlife. Mining and logging are the biggest factors behind loss of habitat. 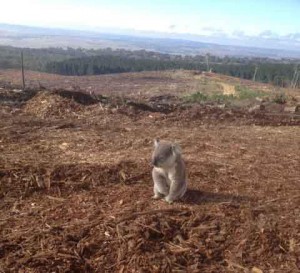 The government has no strategy at all for the protection of biodiversity. Demonising one feral species might make for a good media announcement, but a single swipe of a pen on a mining approval will do far more damage and for a much longer time period than 20 million cats.

I can almost guarantee that if the government succeeds in eliminating cats from some areas of Australia, within months there will be an explosion in the rabbit population of those areas. What will the government do then? Another 10-flag announcement and expensive program to demonise rabbits while they quietly approve some more mining licenses to destroy native wildlife habitat?

Biodiversity is about more than just targeting one introduced species that is doing damage. If that were the case, the majority of the Australian human population would have to leave.