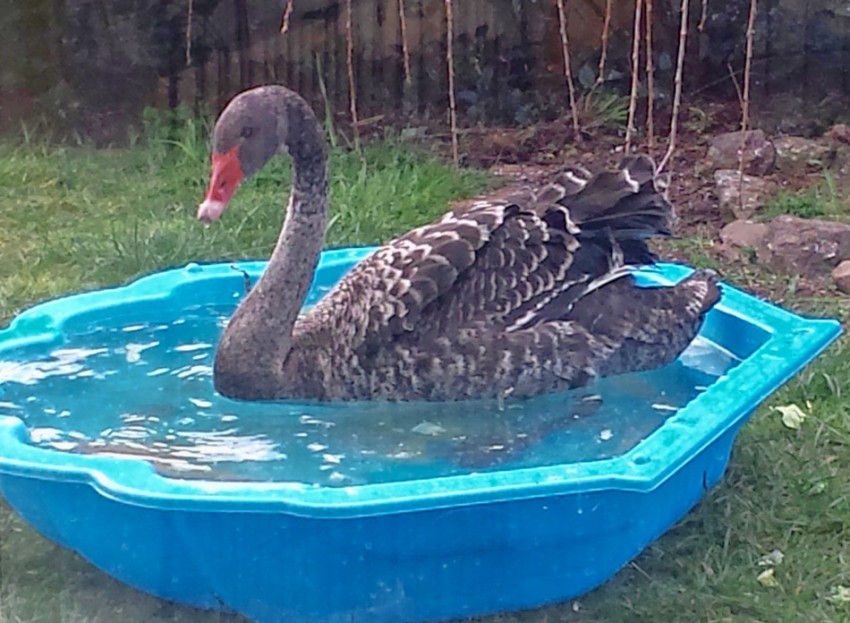 by Philip Machin for Wildcare

Wildcare gets many orphaned and injured animals coming through the door. They are all very special in their own way – ranging from venomous snakes, scaly shinglebacks, flying foxes only a mother could love, nervous roos, squawking magpies and cuddly baby wombats.

But some animals take your breath away with their beauty and majestic style. Such was the orphaned and injured black swan, Jerra, who was rescued from the bank of Lake Jerrabomberra.

Jerra would have hatched earlier this year. At some point the parents disowned her (that’s what happens) and chased her away. At about four and a half months, unable to fly and apparently injured she was rescued by Nicole, a Wildcare volunteer.

“I received a call from a neighbour that there was an injured swan on the bank of the lake. Fortunately, she was easy to catch and I noticed there was a problem with the wing,” said Nicole.

“I had the swan checked out by a local vet and an X-ray indicated a dislocated wing. In order to get the right advice, we sought out a specialist avian vet in Canberra to help treat the bird.”

Unfortunately, after several weeks, the swan didn’t fully regain use of the wing. Rather than euthanise such a majestic bird, it was suggested the National Zoo and Aquarium might be interested in caring for Jerra on a permanent basis and this is what has happened – with the necessary TAMS and NPWS agreement and paperwork in place of course.

“Looking after the swan was a great experience,” Nicole related. “She took over my small backyard and helped to keep the grass in check, as well as my flowers.

“Otherwise she was fed on lettuce, seeds, corn and a turkey starter. She was kept in a cage at night to keep her safe from foxes, but during the day she roamed around the backyard and enjoyed wallowing in a tiny clamshell pool.”

Jerra now has a permanent home at the zoo and is the only resident black swan. She has taken charge of three companion geese in her enclosure and may live the life of luxury for another 25 years or longer.

If you come across injured or orphaned native wildlife, or want information about becoming a volunteer, contact Wildcare on their 24/7 helpline – 6299 1966 or visit their website.

At the beginning of the colonial period, large flocks of Black Swans as well as abundant other bird and animal life were recorded at Weereewa/Lake George.