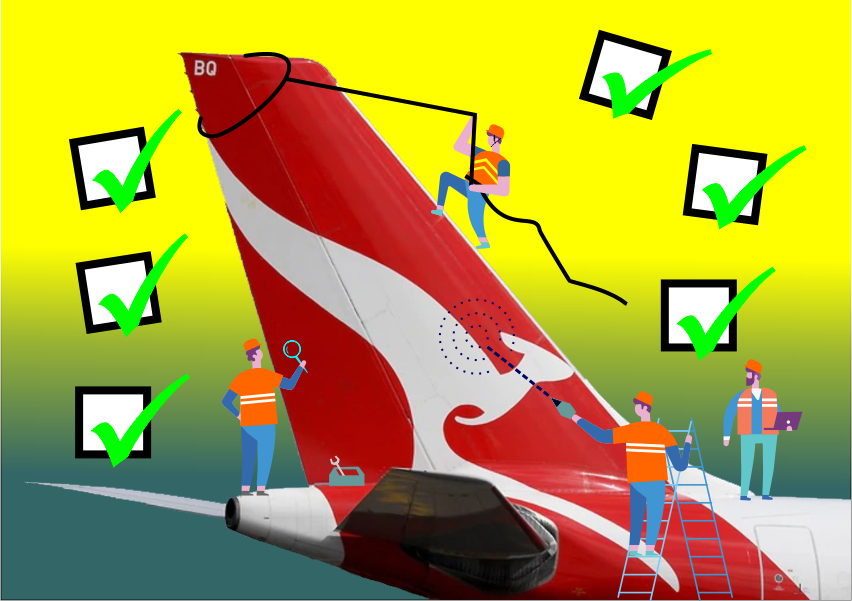 AFTER EVERY FLIGHT, Qantas pilots fill out a form, called a ‘Gripe Sheet’ which tells mechanics about problems with the aircraft. The mechanics correct the problems; document their repairs on the form, and then pilots review the Gripe Sheets before the next flight.

Never let it be said that ground crews lack a sense of humour. Here are some actual maintenance complaints submitted by Qantas’ pilots (marked with a P) and the solutions recorded (marked with an S) by maintenance engineers.

By the way, Qantas is the only major airline that has never, ever, had an accident.

P: Aircraft handles funny … (I love this one!)
S: Aircraft warned to straighten up, fly right, and be serious.

And the best one for last …

P: Noise coming from under instrument panel. Sounds like a midget pounding on something with a hammer.
S: Took hammer away from midget.

From the mouths of school children

Kids were asked questions (Catholic school test) about the old and new testaments. The following 25 statements about the bible were written by children. They have not been retouched or corrected. Incorrect spelling has been left in.

1. In the first book of the bible, Guinness. god got tired of creating the world so he took the sabbath off.

2. Adam and eve were created from an apple tree. Noah’s wife was Joan of ark. Noah built and ark and the animals came on in pears.

3. Lots wife was a pillar of salt during the day, but a ball of fire during the night.

4. The jews were a proud people and throughout history they had trouble with unsympathetic genitals.

5. Sampson was a strongman who let himself be led astray by a Jezebel like Delilah.

6. Samson slayed the philistines with the axe of the apostles.

7. Moses led the jews to the red sea where they made unleavened bread, which is bread without any ingredients.

8. The egyptians were all drowned in the dessert. Afterwards, Moses went up to mount cyanide to get the ten commandments.

9. The first commandment was when Eve told Adam to eat the apple.

10. The seventh commandment is thou shalt not admit adultery.

11. Moses died before he ever reached canada then Joshua led the hebrews in the battle of geritol.

12. The greatest miricle in the bible is when Joshua told his son to stand still and he obeyed him.

13. David was a hebrew king who was skilled at playing the liar. He fought the Finkelsteins, a race of people who lived in biblical times.

15. When Mary heard she was the mother of Jesus, she sang the magna carta.

16. When the three wise guys from the east side arrived they found Jesus in the manager.

17. Jesus was born because Mary had an immaculate contraption.

18. St. John the blacksmith dumped water on his head.

19. Jesus enunciated the golden rule, which says to do unto others before they do one to you. He also explained a man doth not live by sweat alone.

20. It was a miricle when Jesus rose from the dead and managed to get the tombstone off the entrance.

21. The people who followed the lord were called the 12 decibels.

22. The epistels were the wives of the apostles.

23. One of the oppossums was St. Matthew who was also a taximan.

24. St. Paul cavorted to christianity, he preached holy acrimony, which is another name for marraige.

25. Christians have only one spouse. This is called monotony.