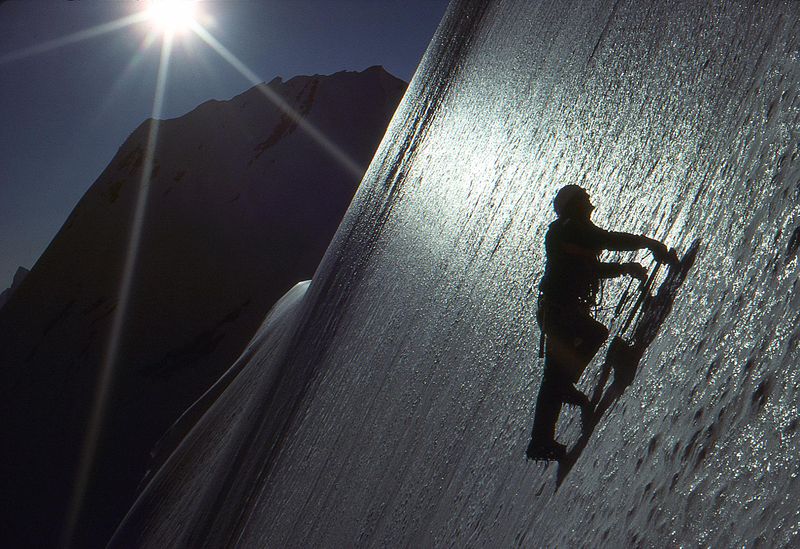 There are some moments in life when you look at the task before you and think, “why did I think this was such a good idea?” That was my precise line of thinking by the time I was partway up the Fox Glacier in New Zealand.

It had not been my thinking when I arrived at the guide company at 8 am that morning, excited and ready for anything. New Zealand was my first overseas holiday, and our ice-climbing expedition was to be the highlight of that trip.

With specialist gear loaded, we were taken by bus to the glacier carpark. After a pleasant half-hour’s walk down the glacier valley – first through rainforests, then barren dry rocks – we arrived at what was known as the terminal face: the very front edge of the glacier.

And then, our crampons on, helmets on, and picks at the ready, we began hiking over the ice.

After about an hour’s walking – climbing, really – I had my moment: why had I ever thought this was a great idea? When the guiding website says the ice-climbing adventure needs a “good level of fitness”, they weren’t joking. I had made a terrible under-estimation of the difficulty of the adventure and a dramatic over-estimation of my own fitness level.

Ice-climbing is like rock-climbing, which I had done a lot of when younger, except there are no pre-made hand-holds and turning your foot in any other direction than toes-in is a really bad idea. The guides had already climbed up the walls and set up ropes over the walls we would climb.

The actual climbing was hard work, but very thrilling. It was a challenge to look at the ice wall in front of you and work out where the pick should go, work out where your toes should go, and then make it work. At the top of the wall, the views were stunning; a landscape of white ice scarred with dark brown, and deep ethereal blue, and rainforests high up the walls of the valley.

On our way back down, we went through an ice cave, a truly magical sight…less magical was the freezing glacier waterfall we found in the middle of it! Crevasses and holes were now opening up everywhere, so the trip down required more concentration than the trip up.

And at last, muscles aching but minds imprinted with the memories of a lifetime, we arrived back at the township of Fox Glacier. The full-day trip was absolutely exhausting; I went to sleep soon after dinner, and woke up only a short time before lunch the next day.

My tip: stay somewhere with a spa. There was one at my hostel, and taking a soak that evening was probably the second-best decision I’d made all day.

The best, of course, being my decision to climb a glacier.