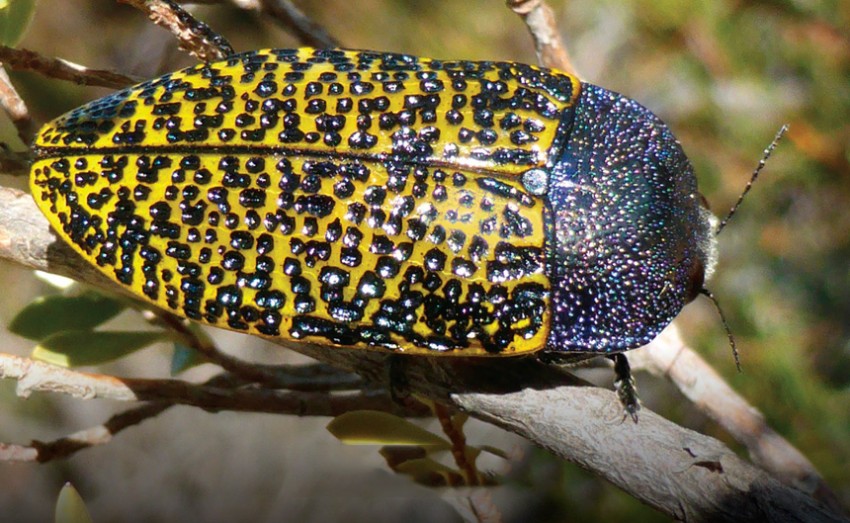 Returning from a fire near Berridale, we noticed a line of dead gum trees along a boulder ridge. “It was the drought,” said the Captain. “Dieback”, said one of the crew. “There’s been a fire through there,” I asserted.

Next day, Insects of South-Eastern Australia arrived in the mail, and there on page 141 was our line of dead trees, with the caption: “Dead manna gums (Eucalyptus viminalis) near Berridale following repeated defoliation by a plague of the eucalypt weevil (Gonipterus sp.) between 2008 and 2011, during a severe drought.”

CSIRO books are beautifully produced and occasionally rather too erudite for the average reader. This one hits the spot: production standards are as high as usual, and the author, Roger Farrow, who lives on a rural property at Burra, south of Canberra, is writing for you and me.

In fact this is the field guide that I wanted all those years ago, when people asked “what do you want to be, when you grow up?”

It’s not actually intended as a Young Persons’s Guide, but any Young Person with an interest in the world around them will love it. Most old persons will too.

Roger Farrow is well known to ACT people as he was for 25 years a stalwart of CSIRO’s Division of Entomology on Black Mountain. He’s also a Friend of the Australian National Botanic Gardens, and an active member of the Australian Native Plant Society. He calls on an impressive list of friends and academic colleagues in his acknowledgments.

The book is arranged in two sections: a general introduction to the world of insects, and a more detailed look at just some of the insects that we are likely to meet – from the 86,000 (and counting) species of insects in Australia. There are some useful pictures of typical regional environments: temperate grassland, grassy box woodland, snow gum grassy woodland, and so on.

A formidable academic career can make for formidable reading, but author Roger Farrow is always clear and approachable. Dealing with moulting and the stages of an insect’s life, he writes: “… the old skeleton is shed and a new one expands and hardens. Adult insects do not moult further, so that small adult insects cannot become large ones.”

He is not entirely one-eyed about the insects he studies so expertly. March flies, for example.  “March flies are particularly annoying and persistent biters on the tablelands and in the mountains.” This text accompanies a photo of a female March fly: “Scaptia clavata, probing the author’s shoe at Tinderry NR.” I hope he gave it a good smack.

The photography is outstanding, suffering only from the inevitable small format demanded by a paperback. As you would expect, this book has a glossary, a comprehensive index of common names, and of scientific names.

A book which would make a great gift. It should be in every glove-box and every school satchel.

Editor’s note: A well-versed amateur naturalist in Palerang has noticed considerable decline of various insects in the past years that would affect food supply for birds and others in the food chain.  If any readers can shed light on this phenomenon, contact us on media@districtbulletin.com.au