Skip to content
You are here
Home > Environment > Isaacs Ridge: ACT delivers bike trails and death in the afternoon 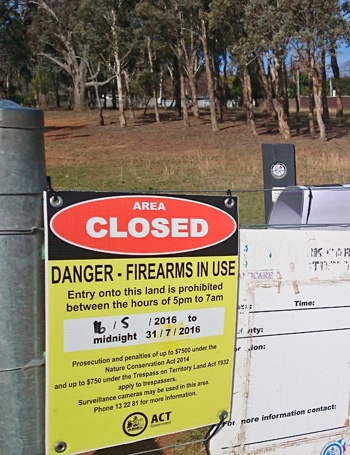 A holiday long weekend, the Queen’s Birthday. As Canberrans congregated to enjoy themselves, the ACT government death squads came again for the kangaroos.

No evidence of habitat or species requiring protection on Isaacs Ridge. “Otherwise the commercial pine plantation, orienteering events and the trail and outdoor adventure park would never have been established there”.

DATELINE 11 June,  5.23 pm: Christine Stevens from Isaacs Ridge was walking her dog at the time. She wrote [to a reporter]:

“I was just chased off by park rangers from Isaacs Ridge now at 8 minutes to 5pm at the top. They were there with two park ranger tray trucks, a 4wd buggy, a truck and a yellow digger.

“They are 200 meters from the most magnificent roos I had just been admiring them, the only ones remaining, the last cluster…maybe 20. It was like watching a shark approach swimmers and being helpless.

“I will send you photos of the roos. I was too scared to photograph the shooters as they were watching me and told me to go. One truck drove after me with its lights on. Very intimidating. If I had been there five minutes later, I might have been shot.”

On the same day the ABC published a story reporting that the ACT parks department admitted its contract shooters had ‘probably’ been using illegal silencers in its recent reserve culls, most of which take place within a kilometre of residences and all within three kilometres of residences [ said to be a  yardstick of  a shooting ‘danger/ safety’ zone].

Christine, who was very distraught about the events of Saturday June 11, wrote:

“We have walked Isaacs Ridge for 30 years and know the families of kangaroos. There is no greater number of kangaroos now than at any other time in the past 30 years.

“We have had kangaroos coming into our suburb for all those years to graze on our lawns. They are the perfect lawnmower. Never eating too low, nor up-rooting grasses and their soft feet never break the ground unlike horses, cattle, sheep.

“Those of us who have walked upon the Ridge several times each week for 30 years years can testify that kangaroos are not overpopulating Isaacs Ridge, nor causing stress to the grasslands nor to themselves.

“A cull is brutal to kangaroos who are herd creatures. There are many residents of the adjacent suburbs who are concerned each night at the thought of the trauma inflicted on these endearing creatures. They have interacted with them over a long time.

“And the distress to sympathetic residents is not short-lived. It is protracted over two and half months. And they are powerless to stop the cull.  We do not know if the cull is executed over a matter of days by way of coordinated effort. Or whether it is like duck season and shooters can enter and cull any time over the 2.5 months.

“Nor are we informed as to how the government keeps track of the number culled so as to ensure no more than 2000 are culled this year across the 10 [reserve] sites. Nor do we know if the count includes joeys in the pouch [who are bashed to death].”

Christine noted that the Director of ACT Parks Daniel Iglesias has said once again in a press release on the TAMS website that “ensuring the grasslands and woodlands are not overgrazed will protect threatened species and ecosystems, provide habitat for creatures such as lizards and ground-feeding birds, prevent excessive soil loss and maintain sustainable numbers of kangaroos”.

However, The ACT administration has admitted that it issues many more licenses to kill kangaroos than the 2000 quota for the reserves this year and similarly last year. Some 23,000 animals were able to be shot with ACT licenses by leaseholders and others in 2015.

In the event, half that number were recorded as killed, but the magnitude of the official slaughter strongly suggests the ACT administration is motivated by things quite different than saving endangered species. In addition to pleasing grazing leaseholders who don’t want to share grass, some plausible theories about what drives this narrative insult to thinking Canberrans were explored in ‘Roogate’, accessible on this District Bulletin website.

Indeed, events at Isaacs Ridge in the months leading up to the cull have convinced Christine Stevens and others that development and getting kangaroos out of the way is the subtext here as it has been at other sites like Lawson in the past.

“Isaacs Ridge is not a large area. It extends easterly from the backyard fence of homes abutting it to the top of the ridge, and from East O’Malley in the North to Long Gulley Road in the South. It is popular place for residents to walk, relax, exercise their dogs, cycle and run.  Many visitors to Canberra come to experience the ridge and its wildlife and views,” noted Christine.

However, the ridge is also home to a large pine plantation, is infested with weeds, suffered a major fire in 2003 and back burning since and is now the site for Canberra’s latest and extensive mountain bike competition course. None of which indicates that the ACT government thinks this is a site of sensitive flora and fauna in need of saving.

Christine takes up the story. “The Government is implementing across the Ridge the Isaacs Ridge Trail Plan: a recreational facility for mountain biking, cross country cyclists, equestrians and walkers. The plan was developed and implemented by Anthony Burton & Associates in conjunction with Off Road Canberra Off-Road Cyclists. The first part to upgrade the mountain biking trails is finished.

“There is still more extensive trail development planned through the entirety of Isaacs Ridge.  The plan acknowledges trail construction requires earthworks and vegetation clearing, both of which have the potential to result in environmental harm.

“No environmental impact study was done before commencing development in February this year. This indicates TAMS and the Parks and Conservation Service find no value in the land being conserved.” 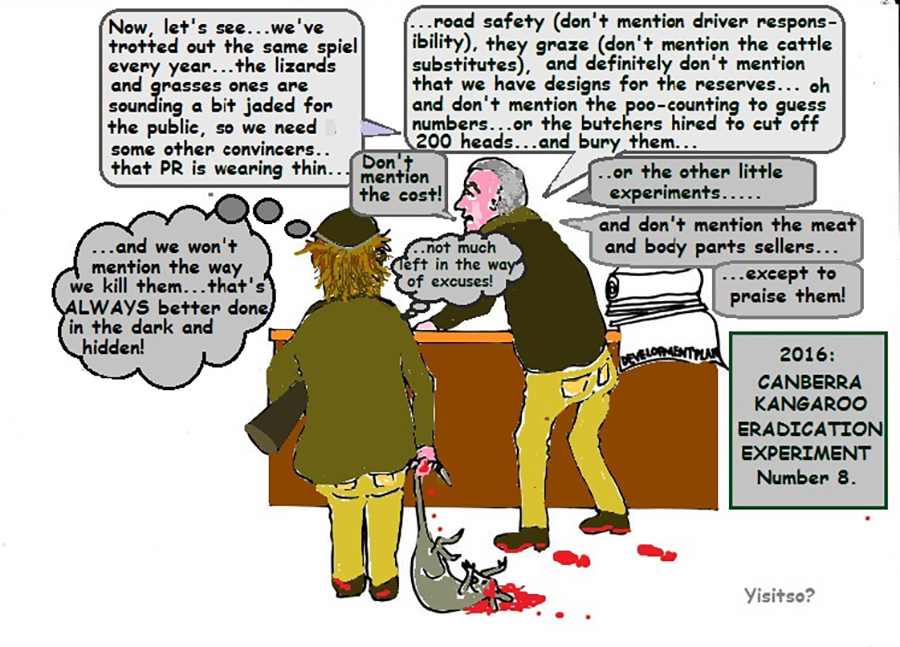 As with the cull that has followed, residents were not informed in advance about what was happening to their suburb, says Christine.

“Residents of Isaacs did not receive direct communication or invitation to consult prior to the Trail Plan being prepared.  It was not until after the plan was drawn and accepted that residents became aware. Since then there have been many concerned resident-initiated meetings inviting TAMS representatives to attend.

“The residents are concerned by the impact of parking in the suburb, particularly at Shepherdson Street, the lack of facilities, especially toilet and water, and the extension of the trails throughout the Ridge as proposed. Isaacs Ridge was the venue earlier this year for Round 2 of the National Orienteering Weekend which included a World Ranking Event for Elite Racers.

Christine has carefully referenced the whole saga in a letter to the Liberal’s ACT Shadow Minister for Transport Alastair Coe and says she is still waiting for any response.

She documented for the politicians the lack of communication regarding the trails and the cull and the safety issues involved with the latter.

The only cull information was a media release on the TAMS website three days before the shooting commenced. She wrote: “A link from that page provides more information and says: “Surrounding residents living adjacent to affected Nature Reserves will be informed of the cull and reserve closure via a letter. Signs will also be erected at all entry points to the reserves. The reserves will also be patrolled by rangers and security cameras.” More information on Territory and Municipal Services website.

“Residents were unaware because few people visit the TAMS website with any regularity. And the TAMS letter informing residents did not arrive to anyone I’m aware of in the suburb.

“No mention is made in the ACT Government’s April and May circular ‘Our Canberra – Woden, Weston Creek & Molonglo Edition’ which lets the community know what the government is doing for us.

“Consequently, it was not until physical signs were placed on the walking paths at the junction to the ridge that anyone became aware of the closure details and the warning of the danger of firearms and monitory penalties. The sign warns of a penalty of $750 for entering the area and of prosecution and fines up to $7,500. (but do not say it is for a kangaroo cull).

“No mention of both the danger of fire arms, and of the monitory penalties appears on the TAMS website media releases. One can only be made aware of the firearm danger and the penalties if one happens to see the physical signs posted at the ridge.

“So now the residents are in the situation where by the ridge is closed to those who use the area for personal exercise or to walk their dog before and after work. This is a majority of the users, even after dark, when the signs aren’t visible.

“It is apparent the ACT Government has implemented this program poorly. The implementation cannot pass standards required for accreditation and OH&S.”

Debunking the government’s argument for culling, Christine summed up the situation at Isaacs Ridge which is causing her and others much anguish. “There is no evidence of any habitat or species requiring protection on Isaacs Ridge. Otherwise the commercial pine plantation, orienteering events and the trail and outdoor adventure park would never have been established there”.

Noting her family’s 30 years of observing a stable kangaroo population on the ridge, she is one of the many who understand that kangaroos lives and breeding are adapted to seasonal conditions. “They have evolved though multiple-thousands of years in Australia needing to preserve their grassland.”

Canberrans need only open their eyes. “An observer will notice a vast difference in the grasslands of Isaacs Ridge and those of the horse agistment properties abutting the northern end of Isaacs Ridge. The lands agisting horses are quite denuded compared to the grasslands which are grazed by kangaroos only.”

6 thoughts on “Isaacs Ridge: ACT delivers bike trails and death in the afternoon”