Skip to content
You are here
Home > Environment > Koalas with friends hang on, barely 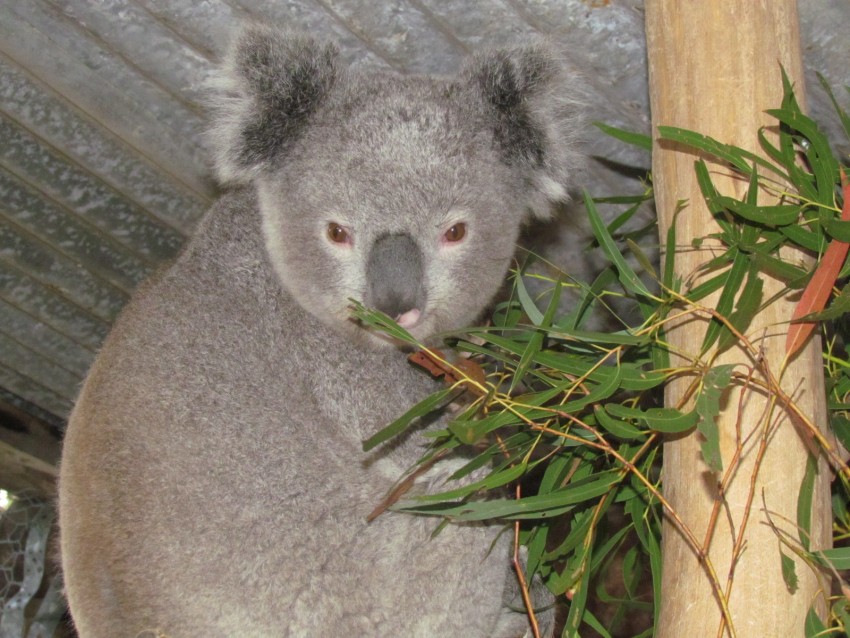 Little Jimmy (pictured here) was found last year beside the road in south-eastern Palerang, having been parted from his mother and suffering from hypoglycaemia. He was lucky enough to be rescued by LAOKO (looking after our Kosciusko orphans) with the help of Wildcare and NARG (Native Animal Rescue Group) and taken to James Fitzgerald’s sanctuary and rescue centre in bush country near Jerangle.

James, who is the Wildcare koala coordinator, also provided a recovery home for another koala found a year or so ago in suburban Jerrabomberra. That young male had pneumonia and was starved. Which is not untypical of what happens to young male koalas as they disperse, looking for a new home in a landscape where most of the trees have been removed since white settlement.

Supported by governments, koalas were slaughtered by the millions for the export fur trade up to the 1930s throughout eastern Australia, leaving few animals to recover and indeed, along with deforestation and fires, the population never did rebound to anywhere near previous numbers. Some estimates are that only 40,000 koalas exist now in Australia. Their habitat is still being logged and some are subjected to ‘culling’ in remaining confined areas (as recently happened in Victoria).

The upside in our area is that the Tinderry mountains around James’ 1700 acre sanctuary, provide habitat for an apparently stable and even growing koala population of about 30 animals. Cooma Monaro Shire is taking an interest, said James. There is talk of developing a land management plan to benefit koalas.

James himself monitors their calls to study their movements in the area. At the moment he is excited about an ANU study of a unique bit of behaviour among the local troupe involving bark chewing – unknown from koala literature.

Why this might be going on is being looked at by PhD student Jessie Au of the ANU Research School of Biology.

When we visited James’ Two Thumbs Wildlife Trust property, Jessie was starting her sampling for chemistry studies that would hopefully shed light on what distinguished a favoured bark tree of the Eucalyptus mannifera (Brittle Gum) species from another that was not chewed. What nutrients might they be offering the furry tree huggers?

James in an article (below) turns the equation around and asks: if we rebuilt a healthy koala population of a million or more what effect might that have on lessening bush fire danger through the removal of tons of (eaten) gum leaves?  As with kangaroos and grassland nutrient cycling, is it worth thinking about the benefits provided by our wildlife?