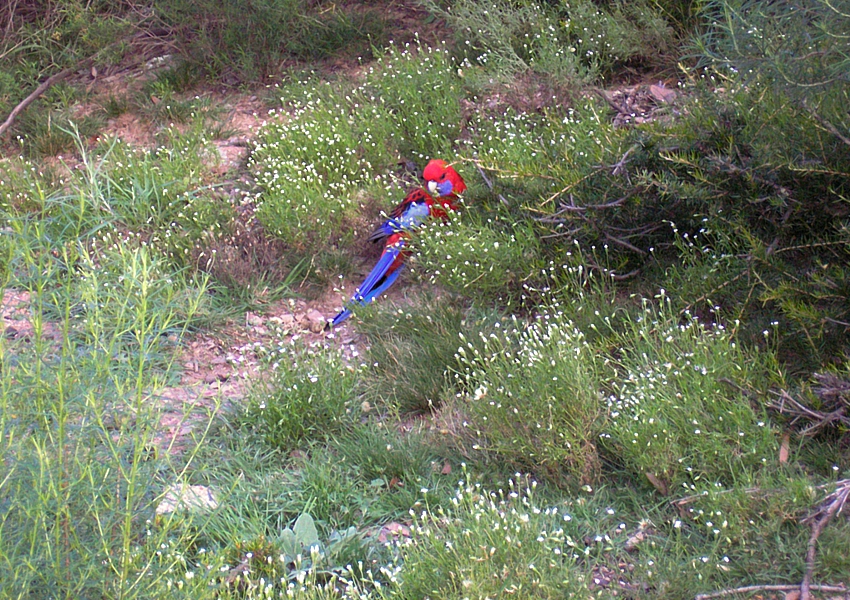 MANY OF the smaller native daisy species have a long flowering period, often with several flushes of flowers. They come in a range of colours, and a pleasing landscape can be developed from growing only daisies.

In addition to their aesthetic value, daisies are a favoured food source of parrots. Sulphur-crested cockatoos, crimson rosellas and galahs spend considerable time feeding on the abundant seed produced by some of these little plants.

There are several species of small daisies that grow naturally in the local area, and, because they seem to be more drought tolerant than some other plants, they have proliferated during the recent run of dry years.

One of these, Fuzzweed (Vittadinia muelleri,  photo 1), gets its name from the prominent and dense clusters of fluffy seedheads. At my place, this species has taken over some of the drier north-facing slopes. It is a neat little plant that grows to only about 15cm and has dainty, three-pronged leaves and a good covering of tiny pale blue flowers.

Two other species in the same genus, V. gracilis  and V. cuneata,  also grow locally but are slightly taller and more upright and their flowers are usually a deeper blue or, very occasionally, pink.

Leucochrysum albicans  (Hoary Sunray,  photo 2) seems to prefer slightly moister but well-drained soils. This daisy can be seen in several localities around the shire, growing in often dense patches by roadsides – they seem to be intolerant of grazing, so have disappeared from nearby paddocks where they may have previously grown.

There are two distinct colour forms, one with yellow-centred white flowers (sometimes with dark pink buds), and, on the Bungendore–Tarago Road and the Kings Highway between Bungendore and Braidwood, a golden yellow form. They bear a lot of viable seed, and the few planted on my place a few years ago have now increased into several sizeable populations.

The Yellow Burr-daisy, (Calotis lappulacea,  photo 3), must be about the toughest of the local daisies, often growing on sites that not much else would tolerate. The first one I planted died, but not before it had shed its seed. Seedlings came up (and thrived) in the cracks of nearby pavers. As mature plants, they shed their own seed, and I haven’t been without them since.

This neat little daisy grows to about 15cm, and its masses of tiny yellow flowers are borne on longish stems above the small bright green leaves. They will grow in compacted, bare soil, but also thrive in better soils.

Another local Calotis is C. scabiosifolia  var. integrifolia,  a ground-covering plant that spreads by suckering. This one prefers moister, heavy soils and grows usually in partially shaded woodland areas. The flowers are pale to dark blue and the leaves a dark, glossy green.

C. glandulosa  (photo 4), which usually grows in fairly heavy but well-drained soils in open grasslands, is another beautiful Burr-daisy. The soft green foliage alone makes this plant attractive, but it is even more so when the flowers appear. These are mostly in shades of blue, but pink and white flowers are common.

Daisies spreading their seed and feeding the local parrots

Vittadinia  and Leucochrysum  seeds are spread by the wind, as they are topped by a circle of long dainty hairs called a pappus.

Calotis  are known as Burr-daisies for a very good reason. There are rigid, barbed awns on their seeds which tend to persist as a whole seedhead until the stem dries out. The seedhead then drops to the ground, or, probably more often, is transported to a new site entangled in the fur or feathers of wildlife.

These are just a few of the local daisies that are well worth growing, both for visual effect and as a food source for the local parrots (main image at top). 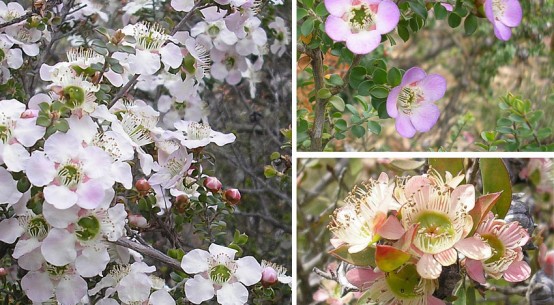 Tis the season for Tea-trees