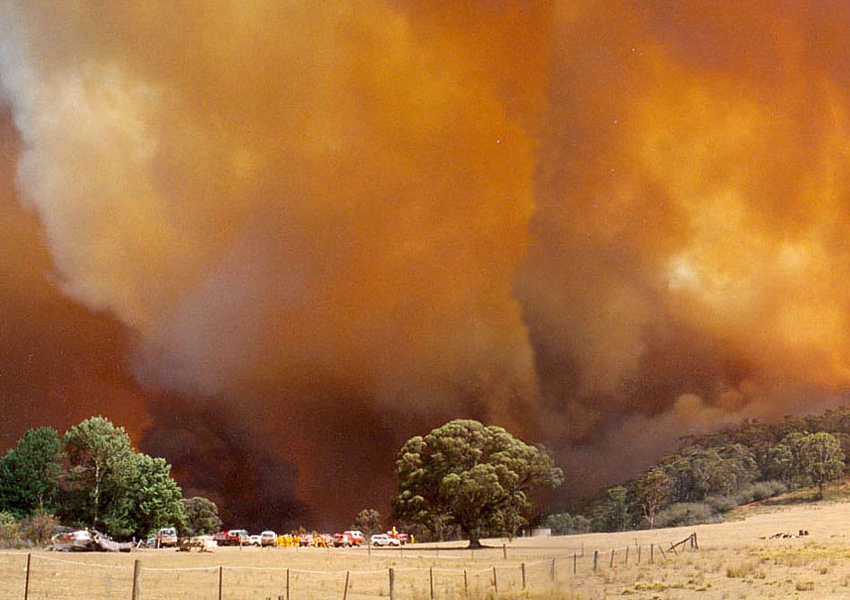 IN 2006 JERRY WILLIAMS, formerly of the US Forest Service, visited Australia to talk to workshops organised by Australian bushfire authorities, and he used the term ‘megafires’. These fires, he said, are essentially ‘unbounded’, but there’s surprisingly little agreement about what the term actually means.

Is it a measure of a bushfire’s intensity? Or area, or duration, or stock losses, or financial cost? All of these have been suggested. 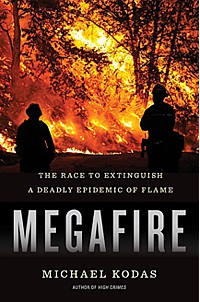 In his new book Megafire,  environmental journalist Michael Kodas notes the various definitions, but is more concerned with the practical realities of massive wildfires, and what is causing what he calls ‘a deadly epidemic of flame’. Anyone living on the urban bush interface as many in this area do, should be interested in what Kodas has to say.

Yarnell Hill (Arizona 2013) was one of the smaller megafires in recent US history, but was responsible for the worst loss of life among firefighters. Nineteen members of a ‘hotshot’ crew died in flames driven by a change in wind direction. This was portrayed in the Hollywood film Only the Brave, (reviewed in the Bulletin 22/11/17) a relatively straightforward account which chose not to mention the years of litigation and financial wrangling which followed the disaster.

The book starts with these Arizona deaths, a grim scene of burned bivouac bags and boot-prints in the ashes. From there, Kodas ranges widely into the science, politics, and (above all) the finances of wildfire management. As the deaths mount up, the costs become astronomical. So who is to blame? What is the origin of these megafires?

Kodas teases out four distinct causes: changing climate, which has resulted in the US fire season becoming dryer, hotter, and 78 days longer each year; mismanaged forests which once contained 20 trees per acre now have more than 800, 40 times their natural density; human activities in wilderness areas such as shooting, trail-bike riding and camping; and – most importantly – the incursion of homes (often palatial) into the forests.

“One in three US residences – 44 million homes – are in the wildland-urban interface, and very few of them are ‘fireproof’

Homeowners, says Kodas, bristle at any sort of government interference in how they manage their land, but “also expect (the government) to provide protection for their property regardless of the hazard they create.”

Not all evangelicals reject notion of climate change

Climate change, some rural fire authorities still believe, has nothing to do with human activities. “Always has changed, always will,” they mumble. The scientific view is otherwise, and Kodas quotes Katharine Hayhoe, director of the Climate Science Center at Texas Tech University.

Dr Hayhoe is a globally respected climate scientist, and has been target of intense political heat because of her scientific views. Unusually, Dr Hayhoe is an evangelical Christian, and married to a pastor. “I’m happy to stand up and say I’m a Christian. I attend a Bible church,” she told a reporter. “In the past they’ve really tried to paint scientists as godless liberal tree-huggers.”

America is a different country. At a ceremony in Prescott, Arizona to mark the Yarnell Hill deaths 20,000 people filled the arena. Kodas notes: “Another poster nearby advertised the next event in the arena – the Doomsday Prepper and Survivalist Expo”.

Though the stories are mostly from the USA, much of this excellent book is relevant to Australia, which Kodas acknowledges. One aspect, however, is purely American: the development of leafy suburban communities in forests above 8,000 feet, as “topographic maps show that all of the homes destroyed in the Lower North Fork Fire were above 8,000 feet.” That’s rather more than Kosciuszko.

There’s much that’s familiar to an Australian reader, and it’s to the credit of the Rural Fire Service (NSW) that so much equipment – radios, hose fittings, maps – have become standard issue to all NSW brigades. Going ‘out-of-area’ is not always so efficient, and Australian firefighters will ruefully recognise the scenario: “They’d work until their vehicles were running out of fuel and water and discover they had no place to refill. The different crews’ radios couldn’t talk to one another. Even their hose fittings were different, so they couldn’t tap into one another’s water trucks or pumps.”

“This is not always avoidable. Different radio systems such as UHF and VHF perform more efficiently in different circumstances. In mountainous country, VHF can work better; in a busy metropolitan area, or even close to a highway, UHF can be crowded with truckies’ effing chit-chat.”

Kodas also makes clear where his sympathies lie in the ongoing debate between the forest ecologists — “let the fires burn” — and the fire-industrial-complex of loggers, graziers, and providers of firefighting services from fire fighting vehicles to Very Large Air Tankers (VLATs) and their crews.

A telling portrait of today’s USA, which in some respects can serve as a horrible warning, Megafire is of interest not just to the firefighting community, but to anyone living on the urban or suburban fringe. If we let it happen, it can happen here …

Megafire: The Race to Extinguish a Deadly Epidemic of Flame,
by Michael Kodas, Houghton Mifflin Harcourt, 2017.

3 thoughts on “Larger, faster, hotter: the megafires are coming”