Skip to content
You are here
Home > Environment > Animal Welfare > Lethal management: 1080 poison — why do they use it and blur its horrendous impacts? 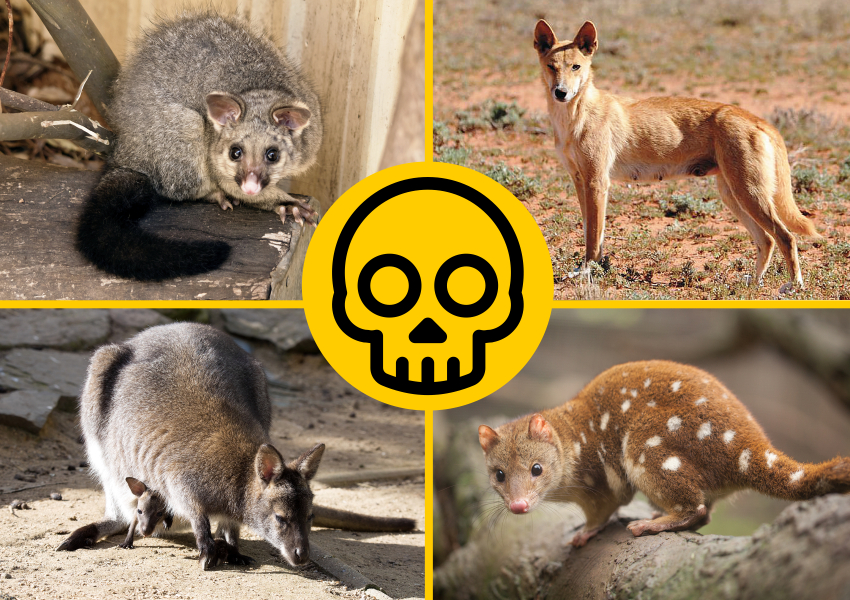 THIS YEAR 2020, the NSW government is undertaking a wide-ranging killing program that it is proud to call the “largest feral animal control program in the state’s history” following the 2019–2020 bushfires. This involves dropping poison baits disguised as food for hungry mammalian animals into 60,000 kilometres of the state’s burned-out forests over a 12-month period. The official target is for feral animals including ‘wild dogs’

Wild dogs include escaped pets and domestic hunting dogs — ie a human-caused problem. But Australia’s native dog and apex predator the Dingo has been reclassified a ‘wild dog’ for this exercise, losing any claim to present-day protected native species consideration.

There is also a related ground-based shooting program going on, all taxpayer-funded. While the official target is feral animals particularly the fox, possibly cats and pigs too, members of the AWPC and other native animal defenders suspect the program has a strong background “stakeholder” — the state’s sheep farmers.

The lethal approach to effecting conservation biology goals has been accepted as a primary environmental management tool in Australia and New Zealand. These two former colonies are world champions and still holdouts in poisoning animals with 1080 baits, often dispersed from the air. In both countries, killing millions of introduced animals once they are labelled as ‘pests’ (eg Australian brush-tail possums in New Zealand) raises even less debate than killing indigenous wildlife.

The practitioners of pest animal eradication and wildlife management of anything not labelled ‘endangered’ frequently blur. The notion of abundance and tag of ‘pest’ is all that is needed. The Self-Poisoning of New Zealand by Name and by Nature, Tony Orman. 14 June 2015, Tasmanian Times.

Has been used in sheep country for decades. National Parks helping the graziers, no-one knows the wider impact

In Australian sheep country 1080-laced baits are often dropped from aircraft. One example is onto a four kilometre-wide transect of country bordering the ‘dog fence’ that now stretches for 5,600 km (3,500 miles) between north and south of the continent.

While the target is Dingos and wild dogs no-one knows the total impact including persistence in the environment, secondary poisoning of scavenger birds or, elsewhere, mammalian native predators. The poison is dropped by government departments on behalf of sheep graziers. Regular government poisoning is conducted on the outskirts of national parks for the same reason.

In the state of Tasmania industry and government are united, although not necessarily with the public, on the need to poison bait brush-tail possums, and poison or shotgun Pademelons and Bennett’s Wallabies that nibble on emerging trees shoots.

Developed as a rat poison, therefore a mammalian poison, from a naturally-occurring plant metabolite, 1080 is now tightly controlled or banned in most countries because of its hideous method of dealing death, along with its variable persistence and danger to non-target species, including carrion feeders. The use of this poison as a wide-ranging control method, targeting for a long time now the Australian native dog the Dingo, (as well as escaped domestic dogs, foxes, cats, pigs, rabbits or possums) is simply put, an animal welfare issue.

Most animals that ingest it will die; and worse, they will suffer horribly for up to 48 hours or longer before they die. In dogs, the signs of poisoning are usually noticed within half an hour of ingestion, but can take more than six hours to show up. First symptoms include vomiting, anxiety, disorientation and shaking. These quickly develop into frenzied behaviour with running and screaming fits, drooling at the mouth, uncontrolled paddling and seizures, followed by total collapse and death.  H Hahner, 1080, the nasty poison. The District Bulletin, Nov 2012, p18.

The NSW Animal Justice Party (AJP) recently published further facts about 1080. Any animals, states the AJP, including humans that ingest 1080 will die a slow, painful death. There is no known antidote. The toxin also causes birth defects and reduced fertility, as well as damage to the reproductive system, brain, heart and other organs.

It works by preventing the body’s muscles and organs from absorbing energy, resulting in failure of the lungs and heart, with a death typically lasting between 8–24 hours for birds and 2–4 days for large mammals.

The possibility of poisoning native non-target species like the endangered Tiger or Eastern Quoll or ground-digging marsupials like Potoroos, or omnivorous birds is strenuously denied by government authorities. There is a long-standing article of belief that most marsupials are immune to the poison, (excepting it seems, the possums that are regularly poisoned in New Zealand and Tasmania).

The Animal Justice Party quotes research indicating that Potoroos are more susceptible to 1080 than introduced rabbits. Localised extinctions of Tiger Quolls were linked to 1080 baiting 20 years ago when politicians were informed by a government Threatened Species Scientific Committee. And yet, nothing changes.  The AJP is under no illusion that lobbying by sheep farmers isn’t related to this toxic warfare, noting there are alternative ways to ward off foxes and dogs.

The above discussion includes an edited extract from the forthcoming book by author and journalist Maria Taylor about 250 years of commercial wildlife exploitation, removal and ‘management’ and its lethal legacy in Australia. ‘Injustice’ will be published later this year.

How many centuries do they need to develop alternative methods?

The Invasive Species Council, a loud and insistent advocate for the removal of brumbies from Australia’s high country, mostly with lethal outcomes — although perhaps shying away from the appalling outcomes of aerial shooting — has come out in public defence of 1080. Until alternatives are found, says a media release, it must be used to save endangered species. It does not add: species pushed to the brink since 1788.

This begs the question of how many more decades or indeed centuries of target animal suffering have to pass before citizen foes of introduced animals join forces with landholders and government agencies to put in place already available solutions.

To its credit, The Invasive Species Council via a commissioned report, then lists some solutions:

The council also states that the report focuses only on the use of 1080 for protecting rare native wildlife, and not for farming or forestry. AND The Invasive Species Council does not support the use of 1080 to target native animals.

Perhaps readers might query The Invasive Species Council on their view therefore of baiting Dingos being rebadged as ‘wild dogs’. And how anyone can distinguish what hungry animal is taking the baits dropped from the air into burned-out habitats. As long as this poison stays legal and easily available, what do they think of landholders that privately spread 1080 baits around rural and rural residential areas, endangered neighbouring pet dogs at a minimum?