Skip to content
You are here
Home > Environment > Climate Action > March for the planet: who is with it and who is missing? 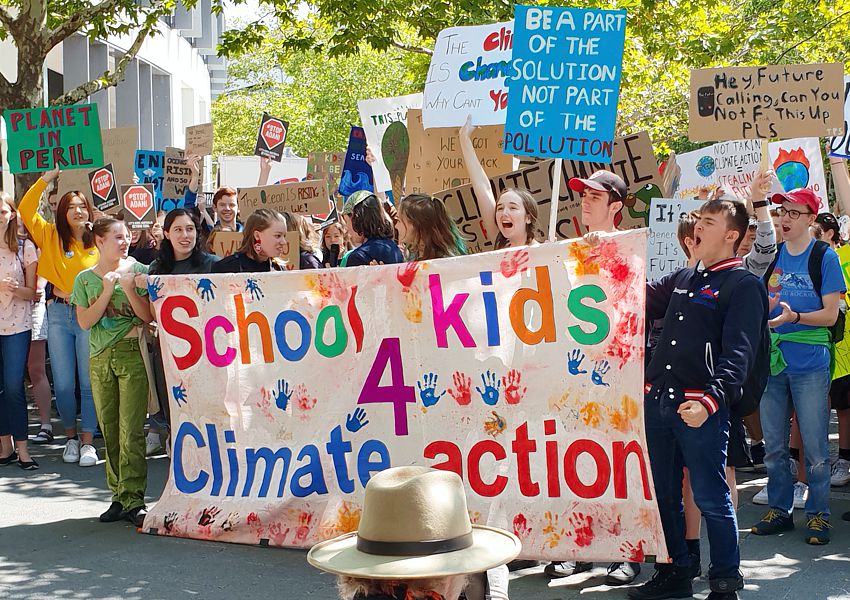 FRIDAY SEPTEMBER 20 at noon in Canberra, will you join? While the Morrison government and the federal Opposition fiddle and the eastern states burn, stressing firefighters to the max, citizens across the country will be marching to voice their demand for action on climate change. 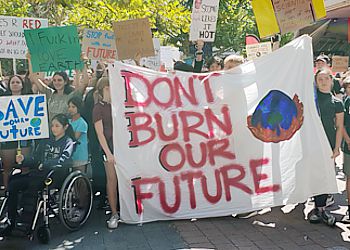 This time, the Australian participation in a global strike by school children for their future has wide-ranging support. Businesses, unions, faith groups and other organisations are supporting time-off the job to go out and have a voice in support of the young people.

A new coalition of Australian businesses supporting workers joining the school strikers rapidly grew to 1,000 companies and that was a few days ago. Thirty unions have reportedly indicated support. If you need to, check them out.

In its third term, the Coalition is sadly predictable on climate change. But what happened to Labor?

A week or so ago, the federal Labor Party leadership seemed to find a good ‘dead cat on the table’ distraction from more pressing national issues like climate change.

Headlines announced the party was agreeing enthusiastically with the Morrison government and the National Party about the evils of “vegan terrorists”. Ignoring a few cautionary internal voices, Labor vowed support for disturbing ‘ag-gag’ laws at both the state and federal level. Press gallery reports indicated this was a new direction dictated by election loss introspection.

Why call these laws disturbing? One reason is the totally overblown rhetoric used to shut up people whistleblowing, publicising or protesting animal cruelty on farms. (Does Labor support animal cruelty? Activists say cruel practices are the only reason for drawing attention to intensive farms or for filming in abattoirs).

These laws also cast a disturbingly wide net. Now and in the future they could be used to shut up other inconvenient citizen groups and journalists reporting in the public interest.

Here was a distraction from reporting about ICAC inquiries into party relationships with developers and their money (spectacularly and unexpectedly matched by Victorian MP Gladys Liu’s massive fundraising for the Liberals amongst “business leaders”). It also distracted from the quest to find the Labor Party’s environmental spine, both federal and in Queensland, which had been parked post-haste, post federal election.

Gone was policy talk about combatting the effects of climate change, and developing alternative economic strategies — for instance encouraging an electric car industry to match global trends — that I recall reporting on with enthusiasm. Now it was back to cosying up to foreign mining interests, even those with, let’s say, an interesting commercial record like the Adani family, allegedly the only way to safeguard Qld jobs, the state’s economy and Labor votes. Perish new solutions and the economic win-win of establishing renewable energy.

Leaving out issues that may be more urgent than vegan terrorists or helping Adani.

(It doesn’t help that Labor and the Greens still don’t publicly acknowledge their commonality on many environmental and social justice issues, and, unlike the Coalition partners, fight each other for seats.)

The ‘let’s get Queensland and the bush back’ narrative regularly leaves out a few issues that may be more urgent than vegan terrorists or helping Adani. There’s the far greater number of jobs at risk with the loss of the Great Barrier Reef. There’s the death of regional economies and towns running out of water in the current lengthy drought worsened by climate change.

There’s the terrifying destruction of Australia’s biggest inland river system the Murray Darling as governments continue to favour export agriculture at the expense of the river’s very survival. Round that out with the National’s-led attacks on Australia’s remaining native biodiversity — pushing tree-clearing and logging, habitat destruction and animals killed for development and profit.

Many hundreds of comments flowed to a recent national newspaper story on the ‘ag-gag’ enthusiasm of the Labor party. The comments voiced voter disgust at the ‘me-too’ tactics of the new Opposition Leader Anthony Albanese, the freedom of speech implications of the laws and the silence on critical environmental issues.

It did not escape these citizens that the Murdoch newspapers — from the Sydney Daily Telegraph to the Brisbane Courier Mail and other titles owned by News Limited — applauded both the Coalition and Labor’s focus on ‘vegan terrorists’ and other citizen troublemakers while backing foreign mining interests and downplaying the biggest existential threat of our time: climate change.

Meanwhile, Queensland — with its state government spouting revived enthusiasm for Adani and other coal mines — and Northern NSW have been enduring the most terrifying spring bushfires in living memory. The southern parts of the country watch in fear as they face a dry summer. But it remains bad form to ‘politicise’ (ie talk about) the bushfires and climate change in the same sentence according to elected officials of both major parties.

Small wonder that people across the board will be out on the street on September 20 to say, we are NOT ‘me too’ on the criminally-negligent lack of action that passes for Australian policy on curbing greenhouse gas emissions. It is long past time to acknowledge the impacts of inaction here and globally — increased fire, drought, flood and storm risks, and an uncertain future for our youth, are the guaranteed result.

The Capital region strike will start at Glebe Park, Canberra,
at noon Friday 20 September and proceed into Civic.

More related articles with thanks to Guardian Australia which keeps a keen focus on the natural environment: