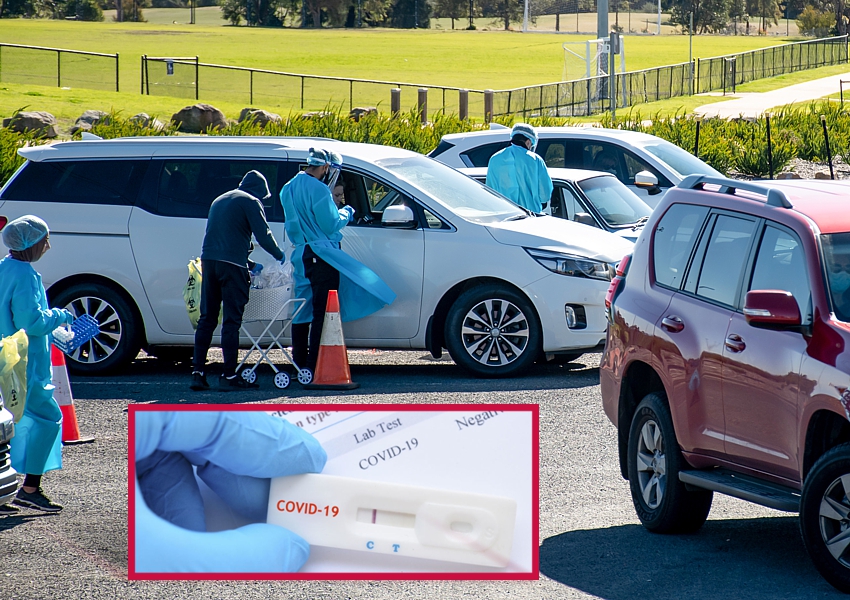 JANUARY 3 2022 was a day like most others in the roughly two years of the COVID-19 pandemic preceding it — except it wasn’t.

Despite reassurances from a federal government desperate to consign the health emergency to history, it was a day in which the number of new infections in every state (bar Western Australia, which is closed off) soared to record highs.

Hospital admissions were spiking too, even though intensive care admissions remained lower than the worst days of the Delta outbreak, due to the apparently milder effects of the Omicron variant and high community vaccination levels.

At the time, the minister admitted to having used large numbers to get the public’s attention at earlier stages of the pandemic, arguing this approach probably saved lives. He said on December 16:

“Because the community came out and responded, because they wore masks, because we all kept the 1.5-metre social distance, because we did all we were asked to do by NSW Health, we managed to keep the deaths down considerably.

In the 24 hours prior to January 4, the number of infections in NSW tipped over 23,000. This meant it was nudging 25,000 at the start of the month rather than its end. Long queues were forming at PCR testing sites, and rapid antigen tests (RATs) were increasingly difficult to find. Test results were taking days to come through, and people missed out on Christmas and other family events while they waited, sometimes for days.

For a federal government seeking re-election, the dramatic deterioration of the COVID picture is a complex and unwelcome problem. It is also one in which Prime Minister Scott Morrison is displaying feet of clay.

The opposition critique of Morrison as always reluctant to act — too little, too late — seems apt in the curious matter of rapid antigen tests.

Read more: When is it OK to take a rapid antigen test for COVID rather than lining up for a PCR swab?

With the far more expensive and time-consuming PCR testing system now being overwhelmed by the sheer numbers of Omicron infections, the federal government has championed the shift to faster and cheaper rapid antigen testing.

But that shift has not been accompanied by a willingness at the national government level to purchase the kits for free distribution to those who need them.

Morrison’s rationale appears ideological to the point of crazy-brave, and it seems only to be a matter of time before some kind of retreat is effected.

His argument invoking the limitations of government, and the value of personal responsibility, should have his colleagues questioning his political judgement, and thus his ability to lead them to an unlikely fourth term in office:

“This isn’t a medicine, it’s a test, and so, there’s a difference between those two things.
They are available at $15.”

By any reading, this is a tortured rationale making a distinction without a difference.

It got worse, though, when he appeared to argue against himself:

“We’ve invested hundreds of billions of dollars getting Australia through this crisis. But we’re now in a stage of the pandemic where you can’t just make everything free because when someone tells you they want to make something free, someone’s always going to pay for it, and it’s going to be you.”

Which raises the question of government: well why not buy them then — seeing as you (the government) can get them cheaper and we (taxpayers) are paying in the end anyway?

Amid widespread concerns the self-administered test kits are unavailable and that where they are, there has been price-gouging, the Australian Competition and Consumer Commission (ACCC), has warned it will consider action to name and shame pharmacists and other retailers profiteering from the demand.

In any event, Morrison’s refusal to fund the purchase of enough test kits for Australians also looks like false economy.

After lavishing hundreds of billions of dollars in various Jobkeeper payments as well as Jobseeker supplements, the prime minister wants to lecture voters about the virtues of personal responsibility, while ducking government responsibility.

Along with the states, the Commonwealth is set to meet some of the costs of rapid antigen tests for concession card holders. They will also support those required to undertake the tests by health rules, such as when they are known close contacts of infection cases.

But so far, it has stopped short of providing the kits for those wanting to monitor their health to avoid spread — that is, the main value of RATs.

So, in a phase of the pandemic when Australians are being encouraged to resume their normal social and economic activities, attend work, and travel between cities and states, rapid antigen tests represent the main method of detecting the presence of the virus and thus limiting the scale of future outbreaks.

This penny-pinching not only threatens to undo past success in keeping community infections down, it comes within sight of an election.

Government, which has been central to Australia’s largely successful management of the pandemic, is in retreat.

From a political perspective, Morrison’s inflexible behaviour is beyond curious. By refusing to use the Commonwealth’s bulk-purchasing power to obtain the kits at lower prices, it has surrendered the very role of pandemic coordination it had claimed to be so central to until now.

Further, this debacle risks reviving memories of Morrison’s dull insouciance through 2020 when he had said vaccines could wait justifying the slow delivery at one point with the words “it’s not a race”.

Read more: Farewell to 2021 in federal politics, the year of living in disappointment

With each glib excuse, the scar tissue builds. So Morrison’s argument the rollout is “not a race” in turn reminded critics of his misjudged secret trip to Hawaii during the 2019–20 Black Summer bushfire crisis and its toxic one-liner, “I don’t hold a hose, mate”.

Just why he would want to reanimate voter umbrage of these damaging miscalculations just months out from an election is not clear. Perhaps his colleagues are starting to wonder too?

From almost the moment she assumed the role as Australia’s first female prime minister, Julia Gillard faced criticism that she lacked political judgement. Various missteps such as the no carbon tax pledge and the “real Julia” pivot acted as catalysts, but the criticism of her judgement was ruthlessly exaggerated by critics, and with lethal effect, to undermine her legitimacy.

A decade on and with Morrison’s multiple missteps, backflips and retreats accumulating, Gillard’s treatment looks all the more unconscionable.

And the question of Morrison’s political judgement, his ability to lead, all the more pressing.