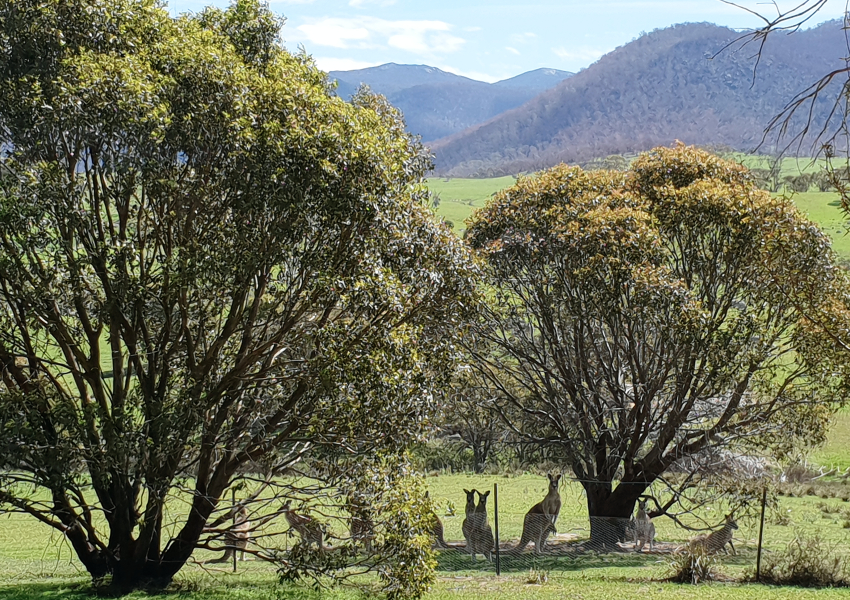 IT TOOK A MILITARY-sized operation and ‘a couple of old heads’ to save the assets and artefacts from the fires that ravaged Namadgi National Park. [View original story below.] 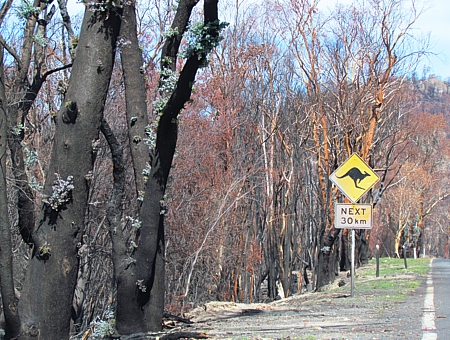 During the fires that were described as ‘uncontainable’ by Namadgi National Parks Area Manager Brett McNamara, park rangers and the RAF’s only choice was to deflect the fires away from known assets and historical artefacts. McNamara says that in previous years it was about putting the fire out but this time it was so dry that they had to steer the fire around known landmarks.

ABOVE: Orroral Valley post fire. Rain in March brought quick green vistas but the ecology is still to return. A small mob of kangaroos out of hundreds pre-fire observe the photographer. Maria Taylor photo.

The strategies and processes used when combating fires as large and ferocious as the ones that went through Namadgi earlier this year, take large amounts of resources and extensive knowledge of fire behaviour and the local terrain. Strategies used to save the Namadgi artefacts included combining aerial support, ground crews, irrigation strategies and hours upon hours of clearing dry vegetation.

The main resource predominantly used in the Namadgi fires was fire retardant. Helicopters, air tankers and crop dusters dropped the fire retardant extensively, ‘painting the area pink’. The fire retardant is used to slow the fire down and lessen its intensity rather than put the fire out completely. McNamara says once the retardant is dropped it gives the opportunity for crews to move to that location where they can then put spot fires out as the fire moves around the burning vegetation.

In order to protect an asset or area the process of clearing ‘containment lines’ is essential. Containment lines are areas of vegetation, foliage, undergrowth or any possible fire fuel that have been cleared by bulldozer or hand. This starves the fire of new material to burn, meaning the fire can be steered away from specific areas.

There are multiple influences that can determine where a fire will move so it can be very hard to judge where it will go next, but with experience and local knowledge you can assess and calculate where the fire will likely head McNamara says.

“We know where the fire is likely to head due to its current location, terrain and current weather.”

“With this knowledge you can get a rough impact time of when the fire will hit the asset that you are trying to protect and then you can set ground crews to protect these areas.

When protecting an area there can be ground crews of 30 to 40 people in one place. There will be tankers, light units, trucks, bulldozers, graders and aircraft in one place, it’s a military operation.”

Training and preparing for a threat as large and catastrophic as these fires in Namadgi is almost impossible to do. McNamara said that the intense summer heat meant the land was far too dry, leading to the fire becoming uncontrollable. Nevertheless, McNamara’s past experience of the 2003 fires provided him with valuable knowledge and skills to be able to achieve the extraordinary accomplishment of saving the Namadgi sites of immense cultural and historical significance.

“It was the past experiences with a couple of ‘old heads’ who were able to work with the resources we had and we were able to get the outcome we got which was being able to save majority of these places.”

Unfortunately, the fauna did not do as well. In fact, catastrophically. That is a story still to be tabulated by the ACT government. 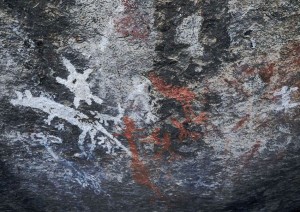 EVEN THOUGH 80 percent of the Namadgi National Park was burned in the January fires, park managers and the RFS were able to save all the Aboriginal artefacts located in the region. [Click on image to view larger.]

Namadgi is home to the only known Aboriginal art sites in the ACT. The prehistoric paintings located at Yankee Hat and accessible to the public, were right in the middle of the fires and were at great risk of being damaged or destroyed.

Area Manager Brett McNamara said one of the major goals during the fires was to protect the multiple Aboriginal and European artefacts. “There was an awful lot of preparation for both European and Indigenous artefacts, huts and sites that we were able to protect.”

“Out of a dozen or so huts in Namadgi we only lost two which was quite remarkable when you think about the intensity of the fire we had,” said McNamara. Demandering Hut and Max and Bert Hut were the only human environments that were lost.

While a primary objective for park managers and fire-fighters was to stop and contain the fires in order to save the regions flora and fauna, the intensity of these fires made it nearly impossible to achieve.

Due to increased heat and lack of rainfall, the environment in Namadgi was extremely dry and this led to the fires becoming too intense for the fire-fighters to contain. The fires in the Orroral valleys and neighbouring hillsides were started by a devastating accident: A helicopter landing light ignited tinder-dry grass, starting a blaze that quickly roared out of control.

Once the fire became too intense to contain, the next step was to protect notable landmarks, said McNamara. “This season it was about steering the fire around known assets.”

While saving the artefacts was a great victory in itself, there has been immense loss of flora and fauna and habitat in Namadgi. [The Bulletin is attempting to obtain more information on the losses and how animals survived.]

Fire is very much a natural part of the Australian environment but it is the frequency and the intensity of these fires that is concerning, agreed McNamara. The fires that occur in Australia don’t, under what has been considered ‘normal’ circumstances, reach the intensity of those in Namadgi and the fires should not be happening so close together. 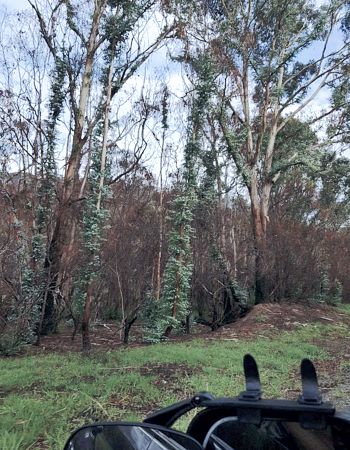 Australian ecosystems are able to fully recover and will often grow stronger after fires. However, severe fires have in the past only been expected every 40 to 50 years.

McNamara says he has seen two major fires in Namadgi in the 30 years he has been the park manager there. When fires come in such quick succession the flora and fauna are not able to recover fully and are not prepared to deal with the stress of the fires.

Although park rangers and fire-crews have strategies in place to help prepare or even prevent other fires in the future, Mr McNamara says climate change is putting too much stress on these ecosystems. “The consequences of the warming climate are these extreme weather events that we get in these sorts of summers.”

It is still early days in the recovery of Namadgi National Park but the vegetation is slowly growing back. However, while climate change keeps leading to such extreme weather events the natural and heritage environment will remain in great danger.