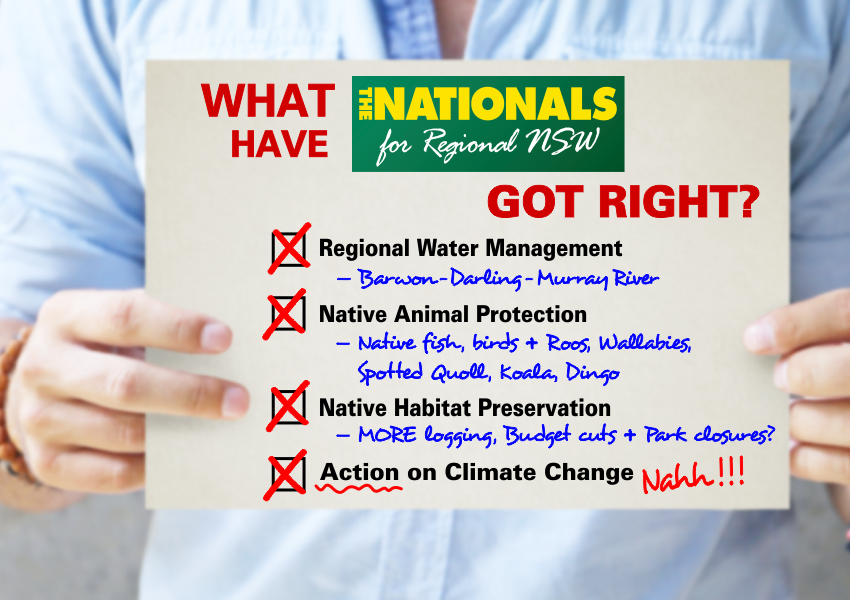 What have they done?

A WILDLIFE TRAGEDY and regional community water debacle with huge fish kills in a depleted river system, the Barwon–Darling, in recent weeks has shone the spotlight squarely on the NSW National Party. Few people realise the extent of the party’s decision-making power over public resources of land, water, forests and wildlife in the state.

The Coalition Government of Gladys Berejiklian, and Mike Baird before her, handed all the regional ‘bush’, i.e. natural environment, portfolios to the minimally representative National Party (which garners less than five percent of votes nationally).

Most prominent now is the National’s Niall Blair as minister for Primary Industries and Water, currently batting away angry local criticism over the massive fish deaths.

RELATED NEWS:
•  Murray-Darling fish kill: authority shelved fish health strategy in 2013
•  This fish kill is a tragedy — but it is no surprise

Hailing from Goulburn and a member in the NSW Upper House, Blair was selected for the job of managing the state’s water, public lands and wildlife in the interests of agriculture. His own background involved managing trees and parks for local councils and heading a worksafe consultancy. Ecological and environmental expertise don’t appear high on the resume or the brief.

Armed with a memorandum of understanding with the conservative NSW Farmers organisation about what Primary Industries should accomplish, among other projects Blair and Barilaro in September last year declared open season on the state’s kangaroos.

This carnage (with hundreds of thousands of additional deaths promised) looked for all the world like a voodoo traditional remedy against the drought besetting NSW graziers while cynics saw a pitch for the rural vote in March (while shifting the on-ground administration of the unmonitored killing program onto National Parks).

On Blair’s watch native vegetation protections were overturned in favour of farmer self-assessment, i.e. on whether native bush on private land should be pushed over. This meant losing public control over habitat for vulnerable wildlife including the koala and increasing greenhouse gases with loss of trees as happened in Queensland.

With Primary Industries Deputy for Lands and Forestry Paul Toole (another National Party rep) assisting, crown land sell-offs have been canvassed, including proposals to divest the iconic travelling stock routes.

Fisheries, biosecurity and forests also come under this departmental umbrella. Perhaps unsurprisingly marine parks have come under threat; dingos have been branded ‘wild dog’ ‘biosecurity’ threats that require a major Local Land Services killing campaign with public funds (again see the hand of NSW graziers); and native forest logging has been ramped up.

Logging the Corn Trail and tales of corruption

Since late 2018 logging has started on the iconic Corn Trail from Braidwood to the coast. The trail has strong indigenous and colonial heritage values and now is a popular hiking trail. The logging threatens spotted quoll habitat and remnant rainforest.

Even the Daily Telegraph got into expose mode. Diverging from the normally more favourable approach (by their boss News Limited) to reactionary, backward-looking politics, the paper documented and criticised the number of National Party-linked bureaucrats being seeded into the Department of Primary Industries under Niall Blair.

It all adds up to a damning picture of cronyism, destruction and mismanagement of the public interest estate in NSW — by politicians who are asking for re-election in March on this record.

“The Nats are plagued by scandal, vested with bullies and riddled with incompetence,” Taggart told Guardian Australia.
“The one thing they were supposed to be good at were looking after farmers and they have failed at that. Look at the management of the Murray–Darling . . . they get less votes than the Greens, yet they exercise more power over us.” 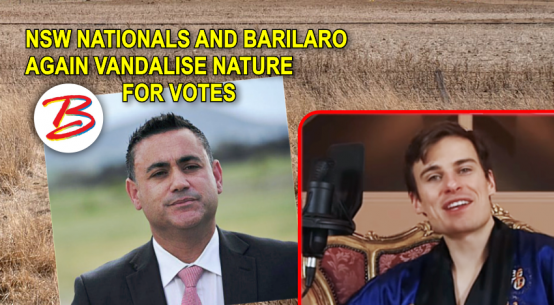