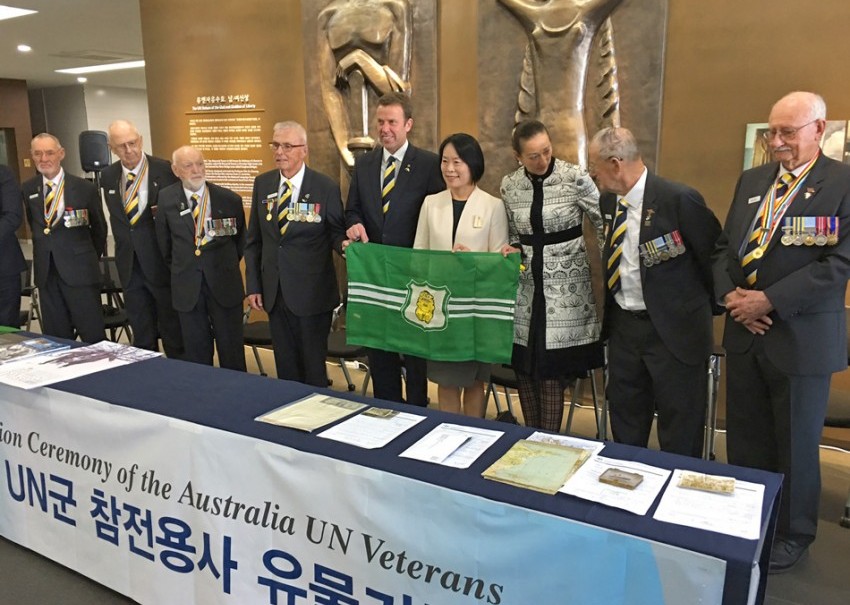 This month it’s time for a tribute to and remembrance of the Australian service men and women who served in the Korean War 65 years ago and in other conflicts since then.

More than 17,000 Australians served in the Korean War and the post armistice period, with more than 1,200 wounded.  The names of 356 Australians killed in Korea are listed on the Australian War Memorial Roll of Honour.

In recognition of that service and of the sacrifices made, Minister for Veterans’ Affairs, Dan Tehan, and Shadow Minister for Defence Personnel, Gai Brodtmann, joined a mission of eight Korean War veterans who travelled this October to the battlefields of Kapyong and Maryang.

Minister Tehan said, “This is an important mission for Australia and our Korean War veterans because it marks the final government mission to Korea of a veterans’ group”.

Readers may be interested to know that the veterans’ ages in the group travelling with the Minister and Shadow Minister ranged from 85 to 91 years old.

Minister Tehan paid tribute: “Our soldiers, sailors, airmen and nurses made an important contribution to the international effort and furthered our reputation as a nation willing and able to do its part.”

Sandwiched between the cataclysm of World War II and the controversy of the Vietnam War, Korea was dubbed the ‘forgotten war’ or the ‘overlooked war’ by historians. The great silence associated with the Korean War is still evident in the redacted nature of some of my family’s military records even today as well as the documents of other serving personnel in that war.

The great silence also characterises the ripple effect of war service. Returning military personnel carried the burden of their service. That burden silenced many of them and delayed their return to normalcy. It shaped the nature of their relationships with family and loved ones, in a number of instances, adversely.

The impact of war on serving military personnel has been and continues to be considerable. It goes beyond the dangers inherent in combat operations that our military, past and present, have had to endure. It extends to the invasive consciousness that their lives could be cut short at any moment when deployed.

They were all changed to some degree as a result. It was and is difficult for returning military personnel not to view life through a sombre lens.

The cost extends beyond the men and women physically injured by their war service. There has been and is an emotional and psychological cost of such service that has only been recognised in the near past.

That recognition is seen in the pictorial records of recent official war artists. Ben Quilty is one such artist. His portraits of Australian servicemen and women, who served in Afghanistan this century, record the emotional and psychological consequences of such military service. The portraits testify to the impact of war and the complex emotions our military bring home.

Increased counselling for veterans and families

The recognition that war has a hidden impact on all military personnel has manifested in increased counselling and support services for veterans and their families. This is, in part an effort to re-integrate military personnel into their domestic lives and the civilian world.

This support was not available to veterans of earlier conflicts such as the Korean War. It greatly benefits those returning from more recent operational service.

While the Korean War may have been overshadowed by other conflicts, it is important that the sacrifice of the veterans is not forgotten. The sacrifice that people from all walks of life make for freedom and democracy should always be remembered.

Veterans and Veterans Families Counselling Service (VVCS) can be reached 24 hours a day across Australia for crisis support and free and confidential counselling. Phone 1800 011 046 (international: +61 8 8241 45 46).  VVCS is a service founded by Vietnam veterans.