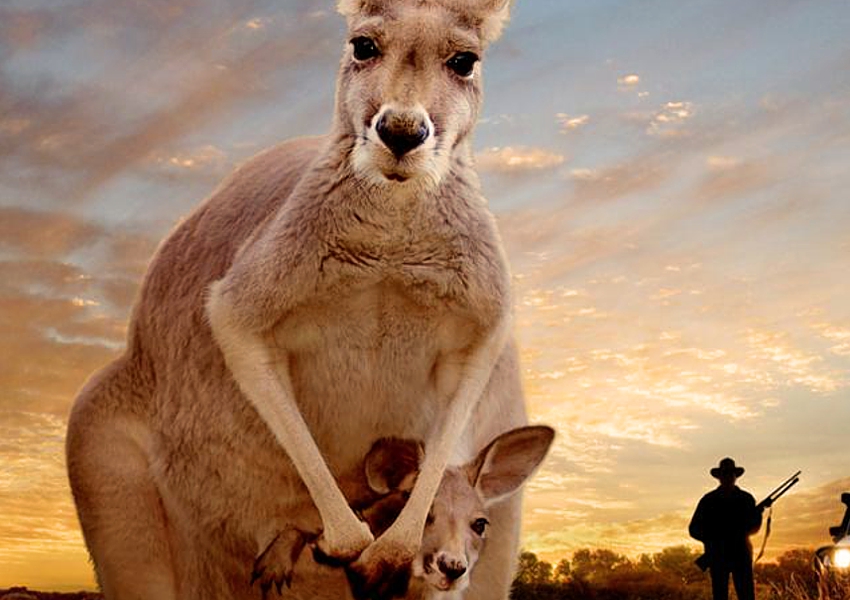 READERS AND VIEWERS of the District Bulletin will know that over many years we have reported the injustices, death and destruction visited upon our national icon, the kangaroo, in a framework of both overt and dog-whistled “pest management” that stretches back to colonial thinking.

That thinking is firmly attached to a management style and supporting ‘science’ dedicated to removing inconvenient wildlife –  having already removed most of its original habitat for post-colonial farm and town development and economic gain.

It is with sadness we see this thinking has infected what should be a haven for wildlife – some undoubtedly seeking shelter from gun-toting neighbours. Killing is claimed to be the only option for so-called wildlife “overabundance” that invariably has proven value rather than evidence-based.

The arguments presented by Bush Heritage, the haven in question, are straight out of the Canberra parks service playbook. We know how brutal and effective the campaign against kangaroos has been in the Bush Capital and how lacking the scientific evidence behind it. See Bush heritage wildlife kill exposed  in this week’s news section.

Coincidentally a new documentary KANGAROO, A Love-Hate Story  has just been released in Australia after a packed-house reception in the United States.

Drawing on many voices – from Australia Zoo’s Terri Irwin and ethicist Peter Singer to ex shooters, graziers, scientists and meat and hide processors – it tells the story of the little-known slaughter of kangaroos for a commercial trade that has been dubbed the world’s largest ongoing killing of wildlife – only it hasn’t been nearly as well known as the commercial slaughter of harp seals or whales that we condemn. 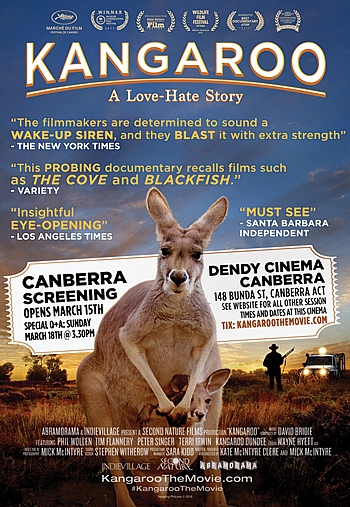 The film also reminds us of both the ongoing animal welfare tragedy and also the unavoidable bacterial meat contamination related to industrial scale killing ‘way out west’, (or even in south-east NSW) shooting at night. It happens far from abattoir refrigeration, and the carcases are likely to be hung on rusty hooks, gutted and driven around in unsanitary storage, some for up to 12 hours – maybe in 35 degree heat.

E.coli and Salmonella contamination data gathered by kangaroo defenders convinced the Russians (after doing their own tests) to terminate importing kangaroo meat since 2009. Health concerns may also be keeping the Chinese silent, despite federal government lobbying for the trade – most recently by the now infamous Barnaby Joyce.

I know of these background events from separate research in preparing a book. Like the film, it delves into the cultural and value realm that allows this ‘industry’ and private shooting to continue. Yes, pest management for agriculture still drives the rationale.

KANGAROO  is the creation of Sydney film-makers Michael McIntyre and Kate Clere.

I recently spoke with McIntyre who was in Europe for a showing of the film to the European Parliament.

He said the five-year film-making journey showed him many Australians had no real awareness of their national icon or take it for granted as it flies on the Qantas tail or in sunny tourist commercials. “Civil society has let the kangaroo down; there is no public debate but there needs to be,” he said.

He also marvelled at the mistrust and hatred directed toward this unique and gentle marsupial (with unsurpassed athletic ability, we might add).

Governments in Australia have played a key role in fostering public indifference by framing various wildlife as a product best enjoyed dead, or as a pest to be destroyed, or a ‘resource’ to be traded. While nature tourism brings in many millions more than shipping carcases overseas, this is not the way we have traditionally viewed our wildlife wealth.

Indeed says Mick McIntyre: “where has the ideology come from that a native animal that has lived in Australia for millions of years could be a national problem? How and when did Australians start believing kangaroos are a pest and therefore must be eliminated?

“We travelled thousands of kilometres across the magnificent Australian outback speaking with indigenous Australians, scientists, commercial shooters, farmers, politicians, artists, wildlife-carers, chefs and activists,” he said. Although there are killing codes of practice in place for farmers and shooters to prevent cruelty, in most cases this seems impossible to police.

“We came across many first hand eyewitness accounts of the brutal treatment of kangaroos and their young joeys. We found out that with the growth of the commercial kangaroo industry, road kills, pest mitigation and recreational shooting, there is very little national data available of the number of kangaroo deaths that occur daily.

“We have woven together an unsettling story for the world to see. Hearing from so many angles gives the audience the opportunity to come on the journey with us and make up their own minds,” said McIntyre.

I second that: please take those who are uncertain or unknowing in your midst and go see this film. See what you think.