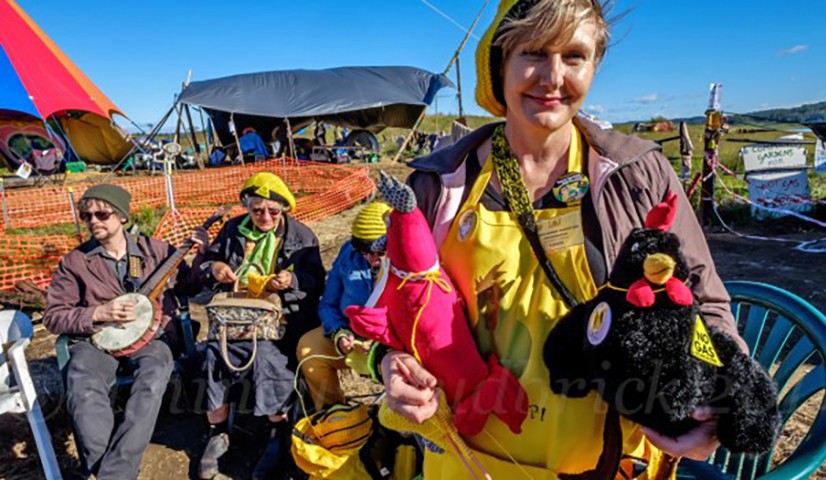 Louise Somerville from the Knitting Nannas

New legislation that has passed both houses of the NSW parliament ( with the help of the Shooters and Fishers and Fred Nile) allows draconian fines and jail terms to be levied against citizens who partake in peaceful and (until now) lawful protests particularly aimed at coal seam gas and mining sites.

According to the Labor Opposition and the Greens who did not vote for the changes, they will expose farmers, protest groups like The Knitting Nannas in the Pilliga who are protesting Santos coal seam gas plans, along with fellow citizens from the wider community, to massive penalties.

Others in the immediate gun sights are those protesting and ‘locking on’ at open cut mining sites (e.g. to stop the serial destruction of the Leard state forest, exposed in our report posted at www.districtbulletin.com.au).  They will all face a maximum seven years’ imprisonment and/or up to $5000 fines while abrogating their property and personal rights.

The changes will allow police to crack down on and disperse peaceful protests, and gives them new powers to stop and search persons and vehicles without a search warrant and to seize property without due process or supervision by the courts.

The same legislation brought into the parliament by resources and energy minister Anthony Roberts drops the fines for mining companies that flout the law from potentially $1.1 million to a $5000 penalty.

The NSW Council for Civil Liberties and the Environmental Defenders Office have been quick to condemn the attacks on free speech in the public interest.  The fact that the laws have been rushed through to protect the coal seam gas company Santos in the publicly owned Pilliga forest have been noted by many.

Sue Higginson, principal solicitor with Environmental Defenders Office NSW, said: “The legality of the CSG activities of Santos in the Pilliga is currently being questioned in the NSW Courts, along with the actions of the Department of Industry”.  She said the Land and Environment Court will begin hearings on a legal challenge against Santos on April 6, according to a report in the Sydney Morning Herald.

Stop Press: Another attack on free speech on a ‘controversial’ subject: Voiceless, the Animal Protection Institute, reports that Transport for NSW has rejected a bus billboard  in Sydney as part of an awareness campaign on the massive commercial slaughter of kangaroos. The billboards merely show an image of mother kangaroo and joey with text that “their fate is in your hands”. The NSW department has deemed the ads too “political” and potentially “offensive” to be displayed on the sides of buses.