Skip to content
You are here
Home > Environment > NSW to add two wetlands to national parks under 33,000ha land purchase 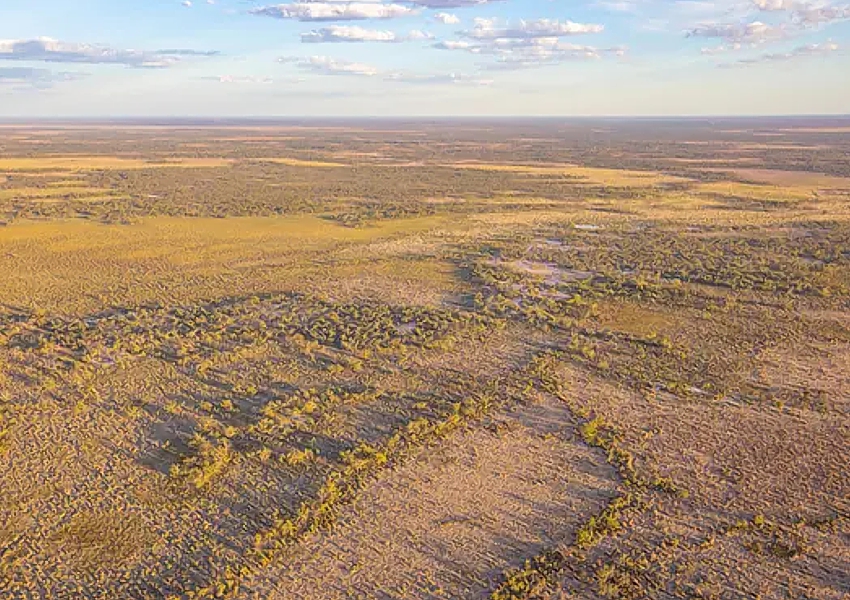 Exclusive: the wetlands are estimated to host 70,000 waterbirds, including Australia’s rarest waterfowl.

TWO NATIONALLY SIGNIFICANT wetlands in far north New South Wales will be added to the national parks estate as part of a 33,000ha land purchase by the state government, Guardian Australia can reveal.

The property, Brindingabba-Bindra, (pictured here by Joshua J Smith) is 150km north of Bourke in the Cuttaburra basin, and part of the Paroo and the Warrego floodplains in the Murray-Darling’s northern basin.

The acquisition includes the Lake Wombah wetlands on the Queensland border, and more than 7,000ha of the Yantabulla Swamp.

These wetlands are a vital breeding ground and habitat for birdlife, including black swans, pink-eared ducks, herons and Australia’s rarest waterfowl, the freckled duck.

The wetlands are estimated to host some 70,000 waterbirds, as well as an array of small native mammals and insects.

NSW National Parks have also confirmed that the property is home to a rare and endangered marsupial, the kultarr — a small sandy coloured mouse-like mammal with a white belly. Other threatened species include the grey-crowned babbler, the hooded robin and the brolga.

The area is traditional country for the Budjiti and Barkandji people, and the property is believed to contain extensive evidence of cultural artefacts and other items of significance.

“With this acquisition, 597,000 hectares have now been reserved or acquired for reservation since March 2019 — an increase of 8.3% to our national parks estate,” the NSW environment minister, Matt Kean, said.

The acquisition is the latest in a series of land purchases since 2019, which brought to an end the long hiatus in national parks estate acquisition since the Coalition took power in NSW more than a decade ago.

Since 2019, the NSW government has added almost 600,000ha of land to its conservation estate, nearly tripling its initial target of 200,000ha by 2022, and bringing the state closer to its historical average of approximately one million hectares a decade.

The acquisition has been met with enthusiasm by environmental scientists.

Prof Richard Kingsford, river ecologist and conservation biologist at the University of NSW, said the wetlands in the area were “magnificent”.

“This is part of the Murray-Darling that’s in really good health and that’s largely because there’s no river development upstream, and Queensland and NSW have agreed to keep that a free-flowing river,” Kingsford said.

“It’s a really great example of prevention being better than cure in terms of conservation.”
— Prof Richard Kingsford

Kingsford said he had been surprised by the government’s increased national parks estate acquisitions, but said it was good to see the program targeting areas that have not been traditionally well-represented, such as arid and semi-arid zones.

Wetlands are vital habitat for threatened and endangered species and, because many of the more remote locations haven’t been intensively studied, there will likely be “surprises in terms of biodiversity” at the new sites, Kingsford said.