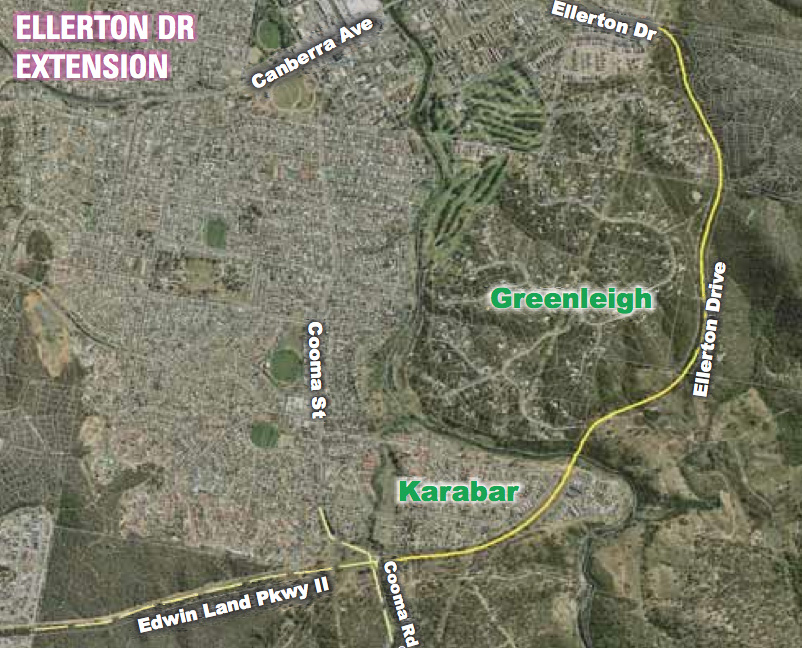 I am a comparatively new resident of Queanbeyan, having turned up in this part of the world after the Canberra bushfires of 2003. Apart from losing my house at Weston Creek, my most heartfelt loss after the fires was my sense of community which, to be honest, I had probably taken for granted for nearly 30 years.

Now my new community is under threat – this time from poor transport planning and an indifferent and cynical attitude to community consultation on the part of our Council.

Queanbeyan City Council looks set to sign off on the Ellerton Drive Extension (EDE) project which, if it goes ahead, will severely undermine the health and welfare of hundreds of residents along its path and potentially exacerbate traffic flow problems for commuters on the airport route between Queanbeyan and Canberra.

The proposed road is intended to provide a route for commuter traffic from the new Googong township and to divert heavy traffic, in particular from the local quarry, away from Queanbeyan’s commercial centre.

Canberra-bound traffic from Googong and Tralee will be expected to flow from Cooma Road around the southern edge of the city, to be funnelled through Ellerton Drive to the Kings Highway and on to Yass Road to the north.

However, for much of the route Canberra-bound commuters from South Queanbeyan will actually be travelling in the opposite direction to their destination before ultimately passing under the railway bridge at Yass Road and smacking into the already heavily congested road past the airport.

This is an example of the cynicism of the current administration and clearly demonstrates that Council does not see its transport requirements in a regional context. It seems as if they are regarding additional congestion on ACT roads as Canberra’s problem, once our commuters leave NSW.

What is worse for hundreds of households along the route is the potential that coastal-bound traffic from Tuggeranong Valley will see the EDE as an easy weekend escape to the coast. This will greatly increase the volume of weekend traffic noise and pollution which Jerrabomberra, Karabar, Greenleigh and East Queanbeyan residents will be subjected to. Council is typically very quiet on this aspect of the project.

The EDE was conceived some 40 years ago to solve traffic problems in a manner that is no longer appropriate today. It was developed without a regional context or an integrated approach to transport which would take into account the needs of the entire region. It does not seriously include bus, rail and cycling alternatives, and merely funnels more vehicles through our suburbs.

There was minimal opportunity for public participation when council dusted off the EDE project after the 2008 local elections. A five-person Technical Advisory Panel was formed, with no elected representation and no community consultation. The panel’s considerations were solely focussed upon the engineering aspects against limited terms of reference. Notably, environmental considerations were barely addressed and social/human factors were ignored.

Touted by the council as the solution to accommodating traffic generated by the Googong township, the EDE would facilitate another development of more than 300 houses at Jumping Creek. The company which is developing Googong township has already submitted a proposal to build this new suburb between Queanbeyan River and the Cuumbean nature Reserve, in what was a designated environmental zone at Jumping Creek along the route of the Ellerton Drive Extension. The NSW government approved rezoning to facilitate this proposed housing development on the condition that the EDE is built.

Of great concern to residents in Karabar, Fairlane Estate, and Greenleigh is the anticipated increase in noise, pollution and the impact of a 6 metre high concrete bridge, part of the road design, looming over houses in the Queanbeyan River valley.

Noise studies have been done, and various noise mitigation proposals are included in the new planning documents but these measures are not mandatory; they are recommendations only.

Despite Council assurance that adequate noise barriers will ultimately be put in place, ongoing operational maintenance of the road will be the responsibility of the NSW Roads and Maritime Services. Once the road is open, noise mitigation will no longer be a great concern for the current council.

In fact, the planning documents do not address the peculiar acoustic properties of the Queanbeyan River valley itself and the potential for car and truck noise to be greatly amplified as it rebounds from the slopes of the Eastern Escarpment. It is doubtful that any of the noise mitigation proposals would be able to cope with this aspect of the noise problem.

Ultimately, the impact on residents in the valley will be extreme, and some residents have already discussed selling their properties and moving on. Council claims that residents knew about these plans before they bought their properties, and of course this is true. However real estate agents have spent years telling us that Council would never be “crazy enough to proceed with building such a major road so close to houses”, and of course we paid the same for our homes as anybody else.

Council may think that it is giving the impression of conducting a due consultation process, however what they are really doing is simply telling us what they are going to do: those in my street do not feel that adequate/proper consultation has taken place.

It is difficult to ignore the feeling that Queanbeyan City Council no longer cares for the motto carried on signage at the entry to the city – “Country Living, City Benefits”. Instead, we seem to be on a path of “Development at any cost, and ignore the consequences”. This can be seen by looking at the history of this project which shows that alternatives to the Ellerton Drive Extension were rejected on sparse evidence.

And then there are the financial issues.

Council is considering borrowing money on behalf of ratepayers, so that it can loan funds to land developers to bridge a funding gap. It has also applied for various grants, again to cover a funding shortfall. Public grants benefit the developers, who are required to spend less of their own funds when public money (including a combined $50 million promised from the NSW and Australian governments) substitutes for developer contributions.

The Ellerton Drive Extension will cost voters and ratepayers somewhere between $75 million and $90 million and will not solve the problems it is supposed to address. Indeed, throughout the history of the project, council has regularly changed the objectives and justifications for the road.

Queanbeyan City Council needs to shelve this project, and begin negotiations with the ACT and NSW governments to invest in a comprehensive regional transport study, taking into account all viable public transport alternatives to road transport.

Building more roads is NOT building community, and Country Living, City benefits is more than just a statement – it is a reflection of what is great about Queanbeyan. Let’s not lose this.