Skip to content
You are here
Home > Environment > Who ‘owned’ the Darling these past years? 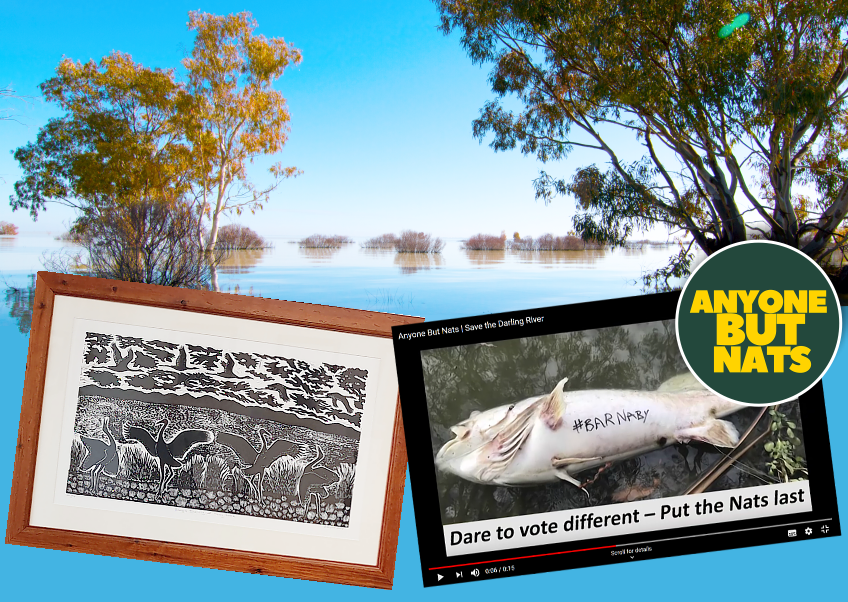 THE Murray-Darling Basin Royal Commission was an opportunity for numerous organisations and citizens to share their concerns about the way the inland river system was being managed. Here’s a flavor of what they saw.

RUBY DAVIES GREW up alongside the Darling on grazing properties. Her submission to the Royal Commission painted a picture of environmental despair and a river system that had changed drastically over a short number of years.

“Over the years, while visiting family on the Darling I have witnessed events never seen during my childhood. Blue-green algae infestations; increasingly low water levels especially over the summer months; and river water polluted with pesticides and chemicals making it unfit for human consumption.”

Recent massive fish kills made headlines in January showing grown men cry as they held dead 70-year-old Murray Cod. The nation was shown catastrophic evidence that aquatic species cannot cope with the level of development on the Darling combined with climate disruption.

“The risks for fish have kept going up in terms of their long-term survival as well as fish not being able to breed as often and extensively as in the past. Their breeding floods, particularly the medium and high range floods aren’t coming down as often as they used to”, says Professor Richard Kingsford, Director of the Centre for Ecosystem Science at UNSW.

The Murray-Darling Basin and its river systems are uniquely Australian and provide water to many communities across New South Wales, Queensland and South Australia.

The Darling River, which naturally flows in highs and lows, and its tributaries are the lifeblood for those communities — farming and the natural ecosystem that rely on the river and wetlands. Gross mismanagement of the Murray-Darling Basin has seen wetlands, river systems, communities and farming industries suffer, but some agricultural concerns benefit.

BOTTOM RIGHT: The outrage felt in river communities and wider regional Australia at the mismanagement of the Darling River system coalesced in the Anyone But Nats (for Regional NSW) organisation in the lead-up to the March state election. The Murray Cod image is a screenshot from their online video campaign. The group has flagged a statewide tour on their website www.anyonebutnats.com.au to spread the message. We have encouraged them to come to Monaro and explain.

Wetlands are key to this river system, yet half water extracted

Tributaries of the Darling River have a number of wetland complexes in their lower reaches. They absorb flows from upstream before filling and releasing water to wetlands lower down.

The wetlands act like buckets, providing water to lower parts of the river. As much as half the water that would have flowed through the wetlands has been extracted upstream according to some estimates, going into farm storages.

Kingsford stresses that the flow of the Darling River is heavily dependent on this floodplain activity upstream. “What we’ve seen since about the 1970s is the progressive development of the tributaries of the Darling.

“The government at the time was pushing to develop irrigation on the flood plains. As a result, more and more people started moving from grazing and dry land crops into irrigated areas.”

He said “a lot of floodplain wetlands like the Macquarie Marshes, the Gwydir wetlands and the Narran lakes have all been affected by a reduction of flow to those systems”.

The flow reduction also affects wetland graziers who relied on the floods coming down regularly. “They have borne a lot of costs in the form of reduced incomes, as well as emotional burdens down to their state of mind as they watch these places that have been in their families for generations start to slowly die.”

A number of floodplain wetlands are included on the Ramsar Convention, as wetlands of international significance. Australia has obligations under this Convention to ensure wetlands and their flora and fauna are protected from ecological disaster and that conservation remains a priority. Nevertheless, focus has shifted away from environmental flows in recent years, despite lip service to commitments.

Kingsford told the Murray-Darling Basin Royal Commission how breeding patterns of water birds on these floodplains had been affected by reductions to environmental flows.

“Water resource development reduced the frequency of large flows resulting in reduction in Ibis breeding events by 170 percent (from 1 in 4.2 years, to 1 in 11.4 years).” Restoration efforts were only able to improve breeding at a rate of 1 in 6.71 years, representing a 59 percent reduction from pre-development periods.

Native River Red Gum forests have also been impacted, a point also made by the Nature Foundation of South Australia. “The Murray River floodplains and ecosystems are still demonstrating reduced condition post-millennium drought, including mass deaths of River Red Gums at lower elevations on the floodplains,” said Kingsford.

Inequity in water sharing at the root of issue

Chris Minns, the Shadow Minister for Water for the NSW Labor Party reasons that inequity in water allocation has contributed significantly to mismanagement of the river system and its flows.

“We believe that a lot of the trouble that we’ve had in Menindee and on the Lower Darling began with the 2012 Water Sharing Plan, that has really devastated communities on the waterway.”

The plan introduced what is known as the ‘triple bottom line’ which aimed to consider the economic, social and environmental outcomes of different water allocation options. However, as administered, the plan favoured irrigators upstream and allocated less water for the environment and the communities downstream.

“Low- and medium-flows that used to come down the system during a dry period were extinguished, or in many ways went a long way toward being extinguished, and it’s had a profound effect on fish life and the environment, from Bourke down”, said Minns.

[This happened despite a 2007 federal Water Act allocating millions of tax dollars to water buy-backs for environment, an area still shrouded in mystery — where did the money go? The 2019 river-flow disaster was heightened after 2017 when the Menindee Lakes were deliberately emptied by order of the NSW and Federal National Party water ministers, a decision that was meant to be permanent. — Ed.]

Professor Kingsford says that the caps for water diversion reflect how the system is being managed. “Extraction at the 1993–1994 levels were supposed to be the cap. The understanding was that that was the cap on everything — including floodplains and developments.”

In 2008, the cap was reassessed to current extraction levels at the time. Water allocated for the environment was then more than halved — from 95GL downward to 44GL for environmental use. Professor Kingsford notes these adjustments reflect the slow creep toward development on the river.

What the NSW Opposition would do

The ALP’s focus, if elected in NSW, would be to restore water equity across the NSW part of the river system. This includes a special commission inquiry into mismanagement of the Barwon-Darling system, as well as restoring low and medium flows to the Darling River and insuring that compliance checks on water extraction for users are better established.

“We also want to ensure that the Cease to Pump rule, which is an incredibly important lever that the NSW government had during periods of acute drought, are able to be turned on. This would protect farmers and the struggling environment during really crippling water shortages like we’re seeing,” said Minns.

Chris Minns’ major concerns are river communities and long-term businesses that have relied on the river.

“[There’s] complete disregard for companies, organisations and agriculture that have been there for over a hundred years. The town of Menindee used to have upwards of two and half thousand people during fruit-picking season. The industry left, and they stopped it.

“As a result those towns lost hundreds and hundreds of jobs. Now, there are only 550 people left in Menindee. It’s all about having that access to water and having that equitable distribution of it along the river. It’s been completely knocked out of balance in a wilful way and the current NSW government is to blame.”

Indigenous communities along the Darling are also suffering. Barkandji Elder, Uncle Badger Bates from Wilcannia, describes how fish species suffer trapped in shallow waters, and how water sharing arrangements have devastated Indigenous way of life on the Darling.

“In the last five years, our elders are giving up and dying. Then our young people are committing suicide and it’s hurting, because of the river. How can I teach culture when they’re taking our beloved Barka away? There’s nothing to teach if there’s no river. The river is everything. It’s my life, my culture”, he told The Guardian.

Licenses to irrigators who can pay

NSW independent MLC Jeremy Buckingham supports buy-backs of A-class licenses as a means to restore equitable flow through the Darling and connect the river to Menindee during drier periods.

“Ultimately, we need to do something about it. If the National Party is re-elected they promise not to [do anything about it], and that means favouring certain northern groups at the expense of the rest of the river”, said Minns.