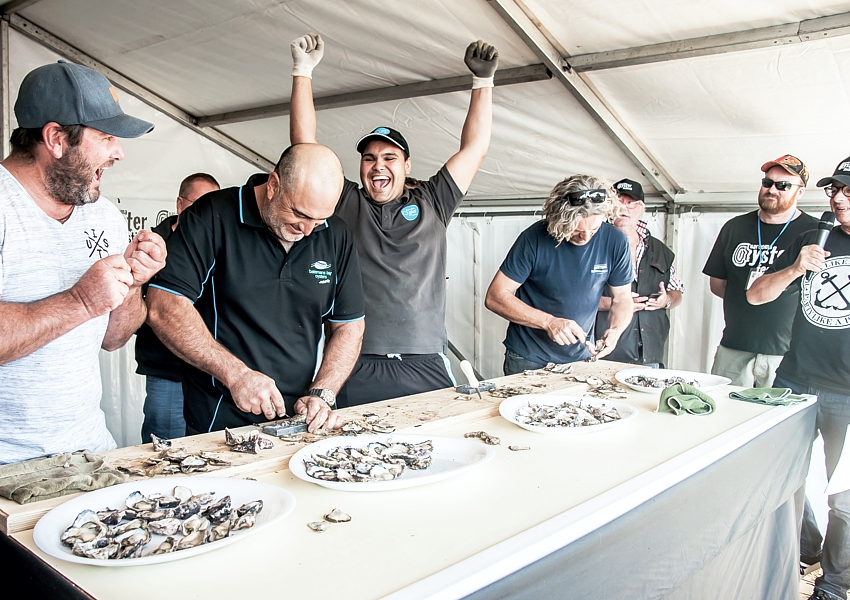 OYSTER LOVERS, fine foodies and many families from around the country will head to Narooma Oyster Festival THIS WEEKEND [ 3, 4 May 2019].

The Festival launches with a bang this Friday at 4pm with a free family concert and the inaugural Long Table Dinner.

Then Canberra party band Big Boss Groove will have everyone up dancing until 10pm.

CAPTION:  IT’S A MAN THING!  The Oyster Shucking Competition is a lot of fun.  Winner of last year’s men’s competition was Australia’s Oyster Coast shucker Gerard Dennis who narrowly beat his former boss Jim Yiannaros,  second from left,  who together with his twin brother John have been the only champions since the perpetual trophy’s inception.  (Image supplied.)

Saturday’s Festival starts at 10am. It showcases south coast oysters grown in one of the most environmentally sustainable regions in the world. It will also feature the search for Australia’s Biggest Oyster, possibly beating ‘Jack’ last year’s winner who weighed in at a whopping 1,898 grams.

“Our oysters are now in prime condition and farmers from many of the estuaries from the Shoalhaven to the Victorian border will have stalls in the popular Oyster Alley,” said Festival spokesperson Cath Peachey.

“Everyone will be able to compare the different flavours of oysters from the different estuaries either from the farmers’ stalls, or at the Ultimate Oyster Experience (some tickets still available).

“If you’re not an oyster lover, there’ll be plenty of other fine food available from the many food stalls on site, as well as boutique wineries and craft brewers.”

Saturday’s cooking demonstrations, hosted by Kelly Eastwood of Eastwood’s Deli and Cooking School, will feature an incredible line-up of chefs.

Local Aboriginal people will share their culture by preparing traditional foods cooked over a fire pit, with Yuin Elder Uncle Noel Butler educating visitors on the use of bush plants in contemporary cooking.

The popular oyster shucking competition, Narooma’s equivalent to the Melbourne Cup, will be judged by John Susman who is one of the biggest names in seafood in Australia being an aquaculture judge, critic, author, commentator and marketer.

The main program, including displays of local Yuin culture, and free kids’ rides and activities, ends at 4pm.

“However live music will continue through to 6pm as will the bar and Oyster Bar,” Ms Peachey said. “The entertainment alone will be sensational.”

Entry on Saturday is $20 for adults;
children under 16 accompanied by an adult are free.

Ms Peachey is thrilled with how the wider community continues to embrace the Festival.

“About 100 volunteers will help out with a range of jobs during the Festival,” she said. “We couldn’t stage a Festival of this calibre without their help.”

Oyster Tours during Saturday will take people out on Wagonga Inlet to see its extensive oyster leases.

Narooma Chamber of Commerce instigated the Oyster Festival as a signature experience for oyster lovers, particularly from outside the area, and to help brand Narooma as a destination.