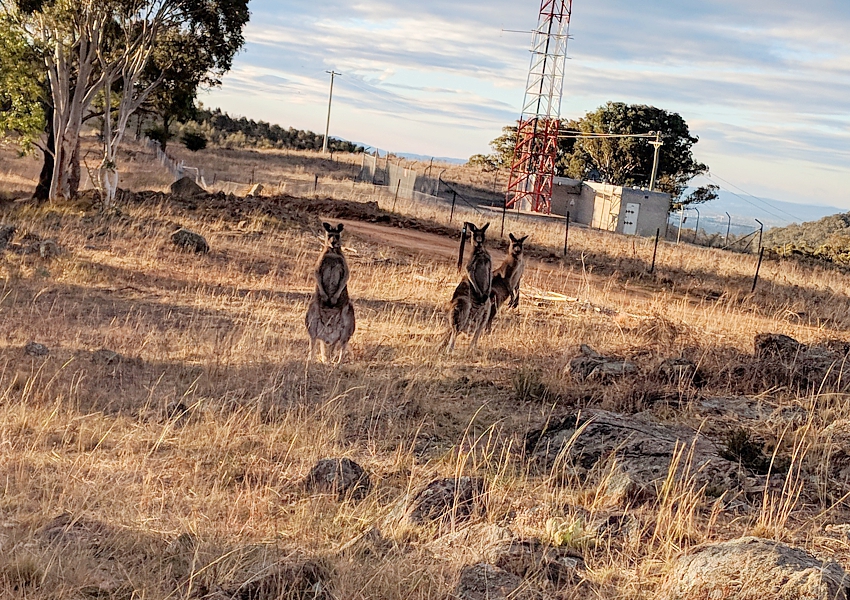 EIGHT HUNDRED and fifty three Canberrans hand-signed a call for an independent review of the capital’s  annual persecution of the animal that holds up one half of the national coat of arms, the kangaroo. The emu, holding up the other half of the coat of arms, was as viciously hunted in the past but there are now not enough of the birds left on the continent to attract this treatment.

When the ACT Assembly gathered on 2 June it found on its table the 853 requests to halt/review Canberra’s internationally shaming kangaroo slaughter on suburban nature reserves, ongoing for more than a decade.

(Should you consider gathering 853 signatures is a trifling task, (thinking of e-petitions), consider the bar set by parliaments at x number (in this case 500) handwritten signatures for an issue to be reviewed by a relevant parliamentary committee. In Canberra, the project was started by the Animal Justice Party. Signatures were gathered over weeks by concerned local residents of all political persuasions, standing at shopping centres and nature reserve entrances. At the end there could have been more signatures but time ran out.)

ABOVE: On Isaacs Ridge and under threat in 2022. Credit Christine Stevens.

It could all have been so different and could be again. In the 1990s the ‘bush capital’ was being promoted as the best place in Australia to see and photograph kangaroos, a wildlife eco-tourism experience with economic benefits.

What the ACT Assembly and its parks bureaucracy put in place instead — the killing of the national icon in the nation’s capital — is a brutal thing accompanied by a public narrative of supposed necessity dictated by ‘science’.

Many kangaroo families — some like those to be hunted at Red Hill in 2022, or Farrer Ridge in 2021, or Isaacs Ridge, Wanniassa or Mt Painter and other parks before that — have been accustomed to friendly humans and thus often remain unafraid at first. Sitting targets.

They are shot by government-hired gunmen and their pouch joeys are brained on a tree or decapitated. Sympathetic neighbours are traumatised.

Older unweaned joeys often escape this barbarity only to die of hunger, dog attack or car strike. Anyone who has observed kangaroos knows how long joeys follow and learn from their mothers as well as continuing to feed.

“Your officers/contractors are using the practice of clubbing the joeys. This action is completely inhumane, barbaric and unacceptable form of euthanasia. In addition, the targeting of females with young at foot or in the pouch should not be condoned. This is essentially a death sentence for three or four animals at once.”

While the signatures were being gathered, concerned residents and long-time wildlife advocates came together as Save Canberra’s Kangaroos, and bought space for an open letter to the ACT assembly published in the capital’s weekly papers.

It described the 2021 government massacre in just one suburb, Farrer Ridge. This ridge had enjoyed a stable kangaroo population for the past 40 years (barring drought) and a healthy native bushland and grassland — both documented by long-time resident Julie Lindner conducting citizen science, (her paper appears below).

The open letter reported: “Last year 296 kangaroos and 120 joeys were killed at Farrer Ridge. Nearby residents huddled in their houses, distressed by the sound of kangaroos being shot and dying. Tragically only 32 kangaroos survived … Some locals, especially children cried when they learned that kangaroos they nurtured through the drought and the fires have been shot. One elderly couple reported: “They were shining their spotlights into our house!” Another man found a pile of kangaroo corpses dumped outside his back fence awaiting collection in the morning…”

The open letter concluded “Each and every member of the Legislative Assembly is personally responsible for this tragedy. Please stop before any more damage is done”.

More citizen science and how big is a hectare?

Chief Minister Andrew Barr (Labor) and ACT Environment Minister Rebecca Vassarotti (Greens) and their fellow parliamentarians were also handed a citizen science research report by residents Jane Robinson and John Grace who, following the 2019–20 bushfires that killed so many animals, researched the Environment Directorate’s kangaroo population estimates and culling history and decided to conduct their own ‘ground-truthing’ exercise throughout Canberra Nature Park.

Their citizen science was conducted over the past 12 months as they methodically criss-crossed Canberra’s 37 accessible nature reserves, each on multiple occasions, searching for kangaroos and counting every kangaroo they saw, offering a real-time on-ground comparison to the government’s desk-top ‘cull calculator’ that yields a seemingly arbitrary number to be killed in a given year without referring to any baseline population data.

This year the government’s kill target is 1,650 kangaroos (a number that doesn’t include the bludgeoned joeys or later joey deaths) on nine reserves. Red Hill nature reserve and Mt Ainslie are being added to previously shot reserves: Mt Majura, Goorooyaroo, Mulligans Flat Woodland Sanctuary, West Jerrabomberra, Isaacs Ridge, Mt Mugga Mugga, and Callum Brae (where a crematorium is planned on the perimeter).

The government press release says the killing is to maintain “appropriate grazing pressure in our grassy ecosystems” claiming an evidence-based program.

The ACT government treats kangaroos as units on a computer and aims to reduce a sentient animal population of extended families to a statistic.

Jane Robinson says calculations for their citizen science project concluded 80 percent of the 37 nature reserves had fewer than 1 kangaroo per hectare. Some reserves which have been repeatedly culled (including ones on this year’s target list) had populations with far fewer than this ratio. They found no reserve in the Canberra Nature Park had kangaroos in numbers greater than 2 per hectare.

Consider that a hectare is about the size of an international rugby football field, and mentally place a kangaroo or three on that field, keeping in mind that these social animals like to mob up from time to time just like humans watching a rugby match.

You might start to question the official narrative of ‘too many’ and ask for the real reason for this ‘cull’. The city’s 2010 kangaroo management plan admitted that ‘overabundance’ is a social and political value judgement, and not a scientific concept.

The citizen critics of the ACT’s science and approach have reminded the assembly of its applauded recognition of animals as sentient beings, that feel pain and fear, joy and trust and other emotions. Apparently, in the ACT this recognition is reserved for pet animals. Farm animals? Wildlife?

An official revolving door of reasons has been offered over the years for the kangaroo slaughter — from ‘saving them from starvation’ to saving other native creatures from their damaging ways. No relevant evidence accompanies this narrative handed out by Labor, Greens and Liberal assembly members and their Environmental Directorate staffers.

A handful of research papers is offered as evidence. These only appear marginally related if beliefs and assumptions about damage are added to research that was not focused on kangaroo impacts, let alone research on kangaroo roles in native grassy woodland ecosystems.

Several independent assessments, one commissioned by the government itself, of the ACT’s claims and research methodology found lack of evidence of any environmental benefits of a lethal program that costs taxpayers almost $1 million a year.

In a moving 2016 personal account to the District Bulletin, Isaacs Ridge resident Christine Stevens told of the day her kangaroo friends were shot. The ridge is again on the list of targets, with park ranger vehicles appearing signalling they are scoping the site. The shooters come next, says Christine.

I recently spent a few hours with her walking the ridge paths which offered scenic outlooks but no wildlife. It used to be, says Christine, that people brought their visiting friends to admire the wildlife and school groups also came to admire the various kangaroos. No more.

One small mob of Eastern Grey kangaroos has been spied near the top of the hill, possibly attracting the ‘cull calculator’ (main feature photo at top).

Christine tells me that since the killers came in 2016, the rare and shy wallaroos that frequented her hill as well as the resident red-necked wallabies have both disappeared, quite possibly shot. 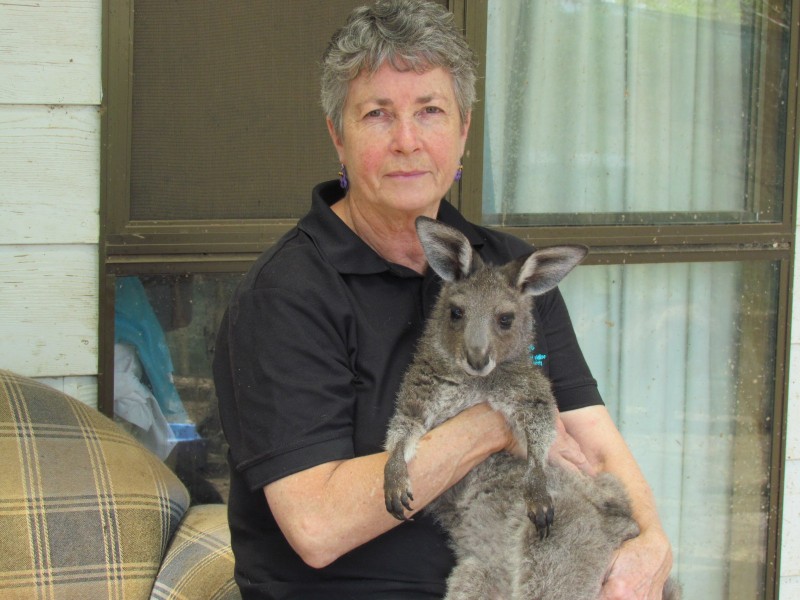 Giving the broken another chance at life 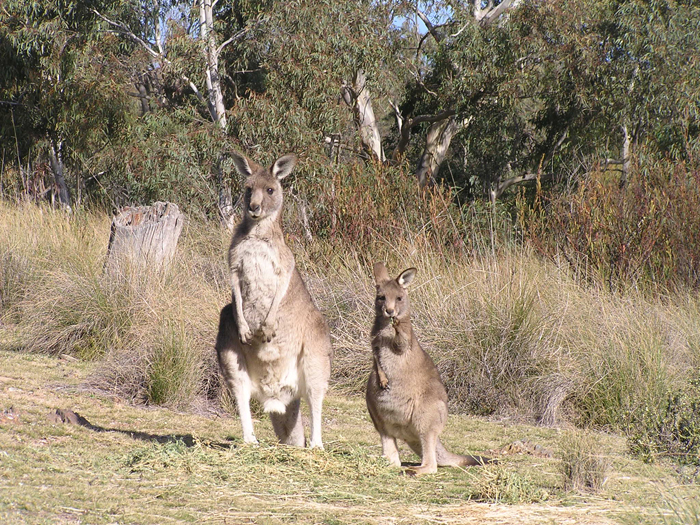 Speaking up for the defenceless: Why should we care about this kangaroo killing experiment?

One thought on “Quiet Canberrans no more: residents demand respect, kindness for wildlife”