Skip to content
You are here
Home > Environment > Rising electricity prices: what’s driving them up? And, surprise, what is the cheapest input now? We at the Bulletin are big fans of our public broadcaster’s business editor, Ian Verrender, who invariably analyses public policy and government economic decisions in a way that is comprehensive and easy to come to grips with.

In these excerpts from a recent analysis, he sets straight current facts and ‘alt facts’ about the rising cost of energy that is bombarding households and businesses.

Far from driving up prices renewable energy is now the cheapest form of generation and that comes from the business community.

“For the past decade or more, we’ve been bombarded with the message from a vocal but powerful minority within Parliament and the broader community that the switch to renewable energy has made Australia uncompetitive, crippled our industry and driven power prices higher.

“The real issue is that, fundamentally, they don’t believe climate change is real or that humans have adversely affected the planet.

“Having spent so long denying science and rejecting the overwhelming body of evidence, they’re now being forced to ignore economics; that renewables have become a cheaper longer term power source.

“US investment bank Goldman Sachs — hardly a standard bearer for radical ideology — now argues that, rather than pushing power costs higher, renewable energy is the cheapest form of power generation. 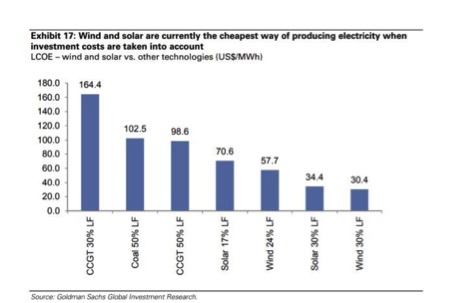 Australian Competition and Consumer Commission chair Rod Sims at the National Press Club in September said: “Forty-one per cent of the increase in electricity prices over the last 10 years has been in network costs and we keep forgetting that. Those poles and wires that run down your street are the main reason you are paying too much for your electricity.”

“According to Mr Sims, extra retail charges account for 24 per cent of the higher prices while higher generation costs as a result of a failure to invest make up 19 per cent of the price hikes.

Gas prices the culprit too

Gas is the expensive bit at the end [of the electricity input chain] that determines how much a producer will charge everyone.

“And the tragedy is that Australia, with one of the greatest reserves of gas on the planet, now charges its households and businesses far more to use that energy than the countries to which we export.

The truth about subsidies

“When it comes to cost, coal lobbyists usually refer to the subsidies doled out to the renewable sector to argue the industry wouldn’t exist if it had to stand on its own.

“That’s a valid point. But it overlooks two things; the vast billions handed out to the coal industry and the increasing competitiveness of renewables.

Every coal fired generator in Australia was built, not just partially subsidised, entirely with taxpayer funds.

“When they were privatised, many were given state owned coal mines with contract prices way below market, effectively a further subsidy.

$1.7 Billion income for NSW at stake in proposed electricity selloff